Artist of the Month
March 2017

Artist of the Month: Naomi Harwin

Our Artist of the Month for March 2017 is Naomi Harwin. We talk to her about how she constructs and deconstructs forms, the role of process in her work and her project 'In Between Things'. 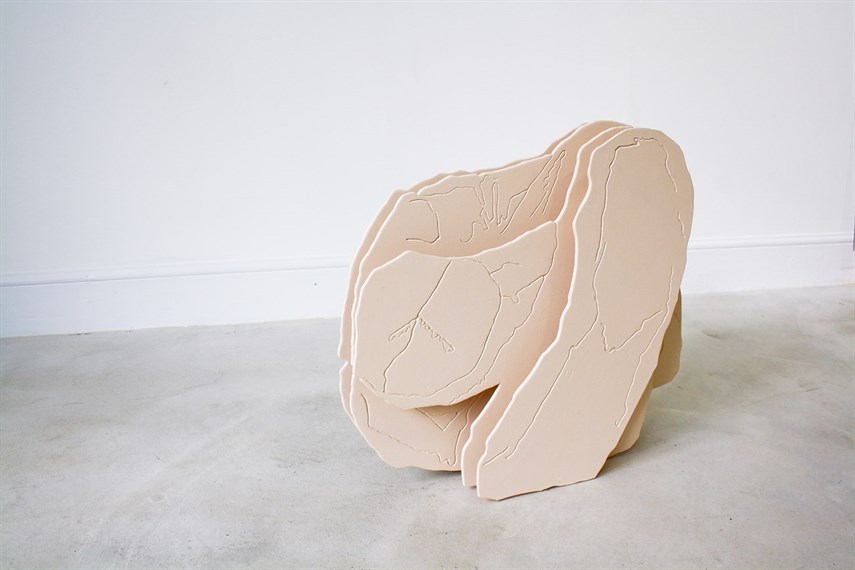 I predominately make sculpture, painting and print based works that through the selective use of shape, line and colour response to observations of a ‘form’ or ‘forms’. My initial intention in these observations is to allude to the essence of the ‘form’ and unpick the aesthetic qualities to generate an understanding of the parts and pieces that make up the whole.

My practice is heavily process led and continually shifts between states of making and unmaking. I am specifically interested in how we assess, organise, and endeavour to understand visual information, considering how we engage with and encounter forms, objects and shapes in relation to spatiality.

The majority of works begin with simplified line drawings describing the most notable features of a ‘form’ as a way of capturing my observation in that present moment. Translating the three dimensional ‘form’ to a two dimensional plane through a series of lines is the beginnings of a continued back and forth shift between two and three dimensions, surface and object.

These observations are used in their unedited state in drawings and prints. But also under go further scrutiny, extracting shapes and lines, investigating their spatial nature in painted and sculptural works, exploring the potential of these parts as being whole objects in themselves.

The works are only fully activated when installed and in dialogue with each other and a space, they are in themselves parts of a larger whole. The works are ‘familial’, there is a relationship between each work, an exchange and in bringing the works together there is a hope that one might have a better understanding of the whole. 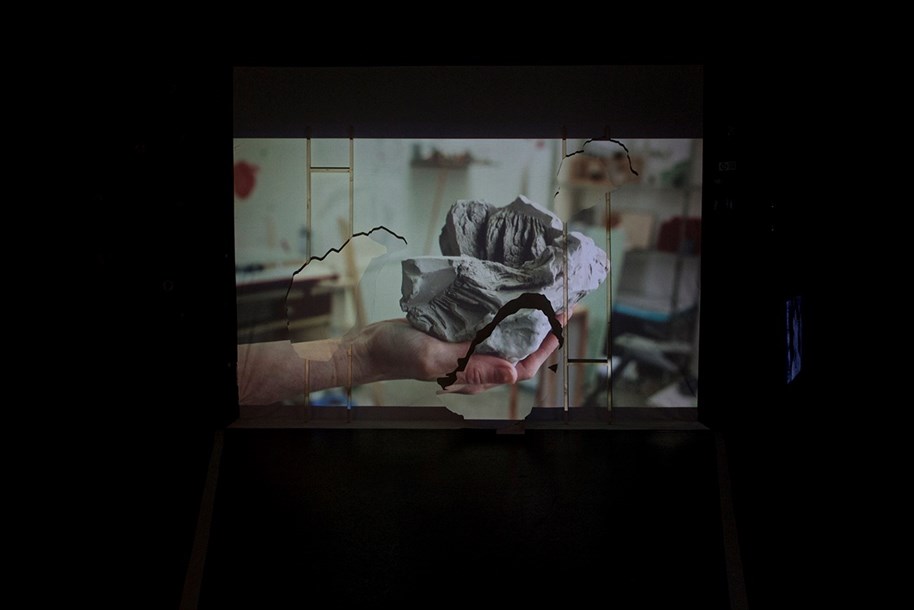 I like the way the your work appears very precise and definite - block colour, strong lines and laser cutting reminiscent of cartography, CAD software or scientific diagrams. However instead of being representational, the works instead address the visual specifics of this type of imagery and diagrams. Tell us a bit more about how you navigate this balance between representation and form in your work.

Essentially my practice is solely observational and has developed out of an interest in the means of understanding encounters with the visual world. As you have suggested representational systems, such as those found in cartography and scientific diagrams have influenced my approach towards process as well as the aesthetics. In the past, works have hinted much more obviously at these references, through the use of grids for example. Other references remain in my practice such as the use of contours lines and cross sectional diagrams as a way of articulating a three-dimensional mass.

It is true the works are not representational of a recognisable object or thing, however their initial intention is to observe and represent a ‘form’. The idea of finding a balance between representation and form is actually quite a poignant matter and is essentially where my practice exists. It sits in a transitional state, in between deconstructive acts, of pulling apart and extracting the essence of the ‘form’ and constructive acts where these shapes and images get decontextualized and become entities in their own right.

The ‘forms’ that are the subject of my observations throughout the work are in themselves sculpted things with their own process of creation, made with reference to two different but connected motivations and influences. The first being a response to the nature of the material itself, while the second is allowing memories of the natural world to inform the qualities and make up of these ‘forms’, often being reminiscent of geological structures.

Each work through the chosen material is capturing a moment in between coming from something and going somewhere new, and in this sense nothing is ever complete, it is continually shifting. 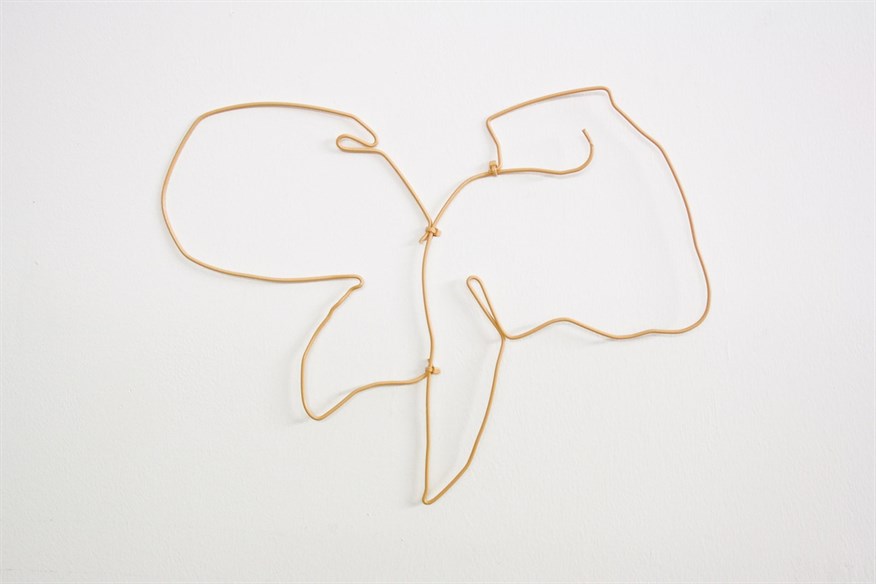 Tell us a bit more about your recent project ‘in between things’ in Norwich, how did it come about and what were the works you made for it?

‘in between things’ was a recent independent project I worked on with artist Michaela D’Agati. Through an exhibition and publication we were looking to pose an awareness of, and discourse for, notions of perceptual encounters, playfulness and a processual means towards understanding the cross-mediation of drawing and sculpture. While also being continually grounded in an awareness of, and relation to, space. 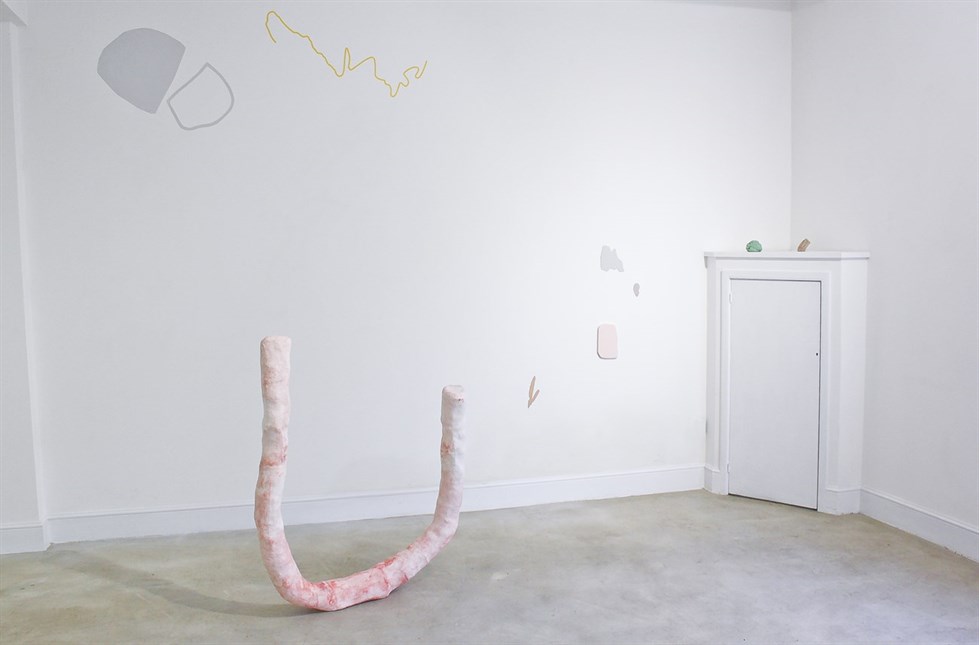 We set up the project as a means of expanding on the shared investigative nature of our practices and to unpick the methodologies used in rationalising and engaging with forms, object and shapes. Creating an environment in both a physical and theoretical space we were keen to keep it as an active site of ‘Investigation’ allowing the nature of the process to remain open and intact, its function as an act of questioning and scrutiny, a seeking and trying to know. Investigating each other as artistic collaborators, as well as investigations into space, object-hood and reciprocity.

The title ‘in between things’ came from a response to the concept of us as artists continually finding ourselves in the ‘in-between’. The transitional state I spoke of before. As I mentioned it is an inherently active and interactive process, each drawing or sculptural form being a snapshot in a process, always on the way to a new form and coming from a previous one. That process being the location of the ‘in-between’, occupying a position at, or on both sides of a boundary or threshold, between one thought, object, space, entity and the next.

The works included in ‘in between things’ were a selection of sculptural constructions, wire drawings, paintings and forms made over a period of six months. As is often the case in my practice the works were ‘familial’ sharing ‘parent’ objects, two of which were included in the exhibition.

Although the production of our work was very separate and remained in our own studios (except from a collaborative wall drawing created on site), our curatorial approach was very collaborative and dynamic. Allowing the works and space to form their own dialogue and understanding of each other. 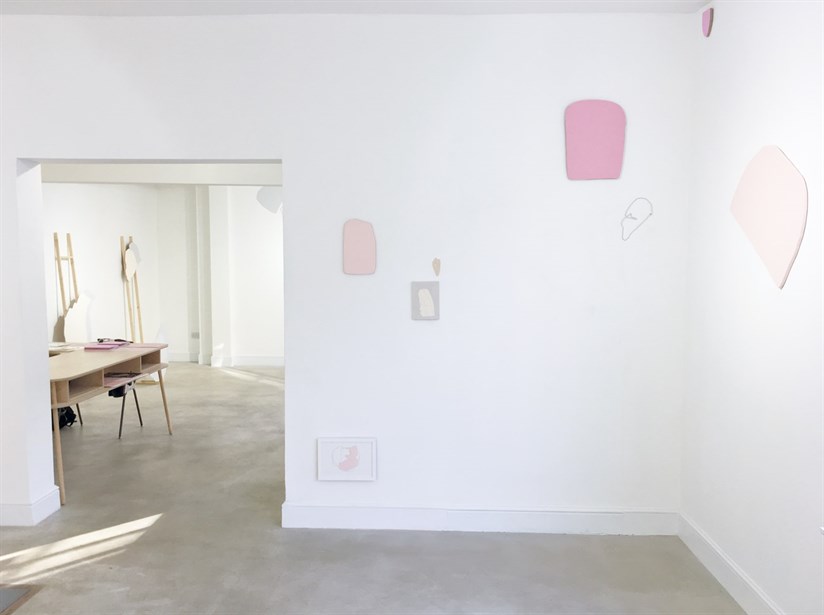 What is your studio like, what kind of work do you use it for? Are you strict in terms of how you spend your time there?

I have a studio at Wysing Arts Centre in Cambridgeshire. Located in the Strawbale block, it is a purposed built studio on a large open site. Due to the nature of the way I work I like my studio to function as an adaptable workshop space. While having a desk and areas to work on paintings and drawing, I like to keep a lot free space available for the construction of sculptural works or installation experiments.

Around and in the space are multiple shelves and structures with my collections of ‘forms’, objects and maquettes, with much of the works and construction installed, or on view. I am interested in how a work can engage in different ways with a space and relate to others. So this casual process of display is an active way of working through thoughts, while allowing encounters to inform new works.

I get to the studio three or four times a week, but don’t tend to have a strict structure for my time. It is really dependant on what I am working on at that moment. For example, during the run up to ‘in between things’, as I was making a lot of new works for the show, I was spending long hours producing and experimenting. Where as more recently I have been using it as a space for reading, reflecting and writing applications.

I am generally drawn to the work of artists who have a strong connection to the use of process and material in their practice; artists that engage with surface and the translation of two and three dimensions, such as the work of Richards Deacon, Matt Calderwood, Julie Mehretu and Rachel de Joode.

In the work of Julie Mehretu, her large paintings in particular, I enjoy the way she uses the language of abstraction, merging elements of controlled architectural renderings with loose and investigative drawing. What emerges out of this push and pull of varied forms of language is a morphing of these engagements, and an arising of something new. In this way, I feel her works also exist in the in-between place, which I often find myself working in.

My interest in the work of Rachel de Joode is her approach towards exploring the traces of interactions, and relationships between ‘things’ and their representations. Again, identifying similar preoccupations in the work draws me to it. De Joode’s work exploring the interactions with surfaces that are reminiscent of skin, make reference to materiality in relation to the body. Considering the process of art-display through her staged encounters. 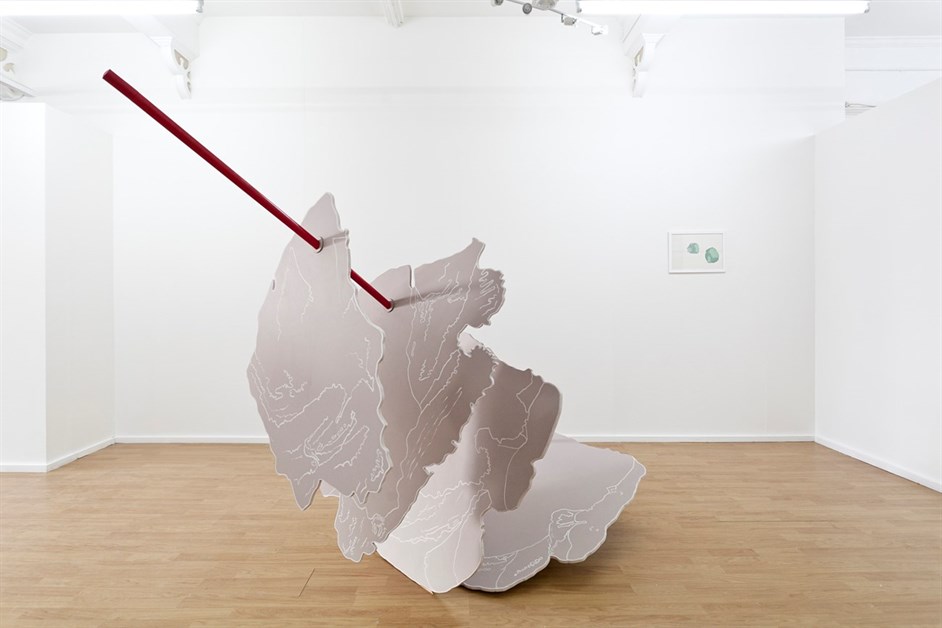 I currently have a few small projects that I am involved in at the moment that will take the form of group exhibitions. Also as a result the material and reflections generated from the ‘in between things’ exhibition and publication, we are working on developing these discussion further and expanding on the collaborative nature for future projects. I have most recently been looking into and applying for a number of residencies and open call projects.

Having made a lot of work and had a very practical 2016, I am currently taking the time to do some reading and reflection that is proving to be generative of new avenues of exploration.

Banner Image: In Between Things, 2016