Artist of the Month
February 2017

Artist of the Month: Holly Slingsby

Our Artist of the Month February 2017 is Holly Slingsby. Her work draws together performance, sculpture and video, reinventing traditions and restaging miracles. 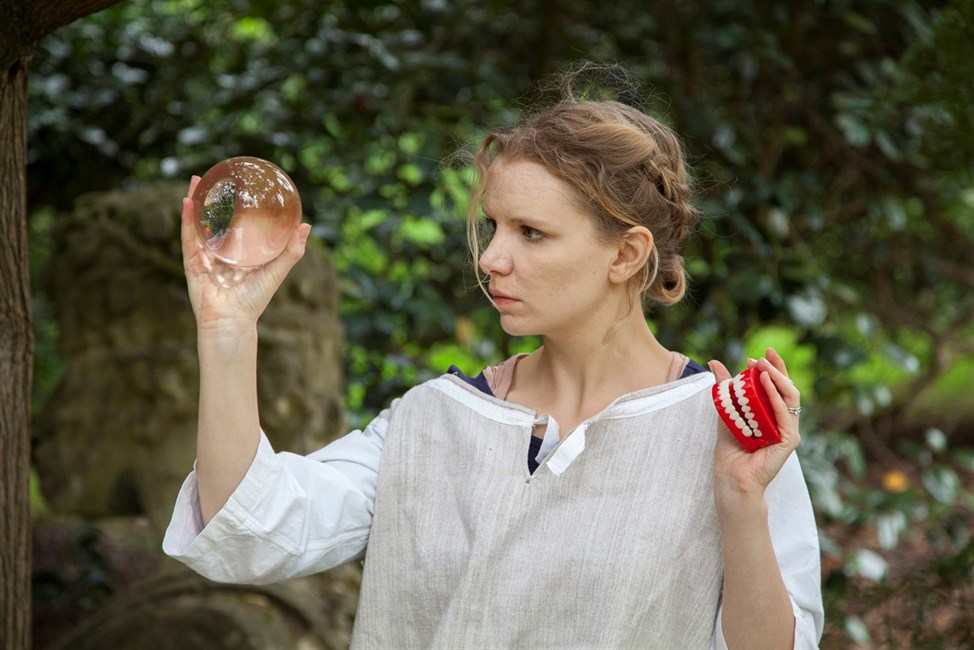 I make performance, video and objects. The performances take the form of tableaux vivant, processions or communal rites. The objects are mostly props, costumes and scenery for the performances. The videos tend to be performative as well.

I’m interested in the trajectory that images take through art history and into popular and contemporary culture. In particular I’m thinking about and working with images of women - saints, goddesses - asking questions of these, trying to reanimate them, give them a voice.

I spend a lot of time researching: reading history and literature (currently medieval miracle plays); looking at objects in museums and religious buildings; and getting lost in Wikimedia commons mining for obscure art-historical tropes. All of this stews in my mind over a long period of time, and the works I make tend to be a combination of responding to a space or situation, and the cooked-down jus of the research.

Your performances often take the form of a religious or spiritual rituals which have been updated or remodelled in some way. What interests you about these ancient ceremonies, and how do you choose or design ones for today?

I think belief is pretty performative, and performance is belief-based (in that is requires a faith of sorts from those involved, at least a suspension of disbelief). So religious ritual makes a lot of sense to me, in that it combines the two. The language of ritual feels instinctive to me - partly because I grew up going to church, but also because I think rites tend to tap into universal concerns. It’s about visualising the invisible, in the hope that it might be out there.

I’m especially excited by common threads that run through various traditions and cultures, and how these similarities have come about. They allow you to imagine that all the rituals point in the same universal direction, perhaps to transcendental realities, perhaps to a collective subconscious full of archetypes or fundamental beliefs. 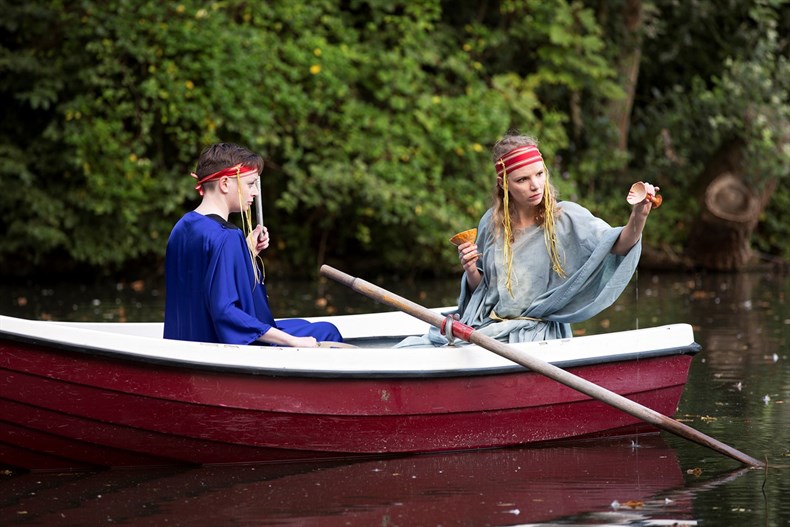 The props and costumes are a really interesting part of your work, I notice you describe them as lo-fi 'stand-ins' for real relics, made from descriptions. Tell us a bit more about these artefacts, and your approach to making them.

The objects I make tend to be bad copies of ritual items, or saints’ attributes from paintings translated into plastic and cardboard. They’re signs pointing to other signs, to things which may or may not exist. I often reuse props and costumes between one work and the next, so they become a lexicon of my own, but also a kind of art-historical dressing-up box.

For my show Behind the Curtain at Tintype, London in 2015, I made a large curtain based on the description of the temple curtain in the Old Testament book of Exodus, which divided the main part of the temple from the most holy part. Other items might be copied from icon painting or ancient pottery. Often the props are found objects, like Hallowe’en chocolate eyeballs to represent St. Lucia. 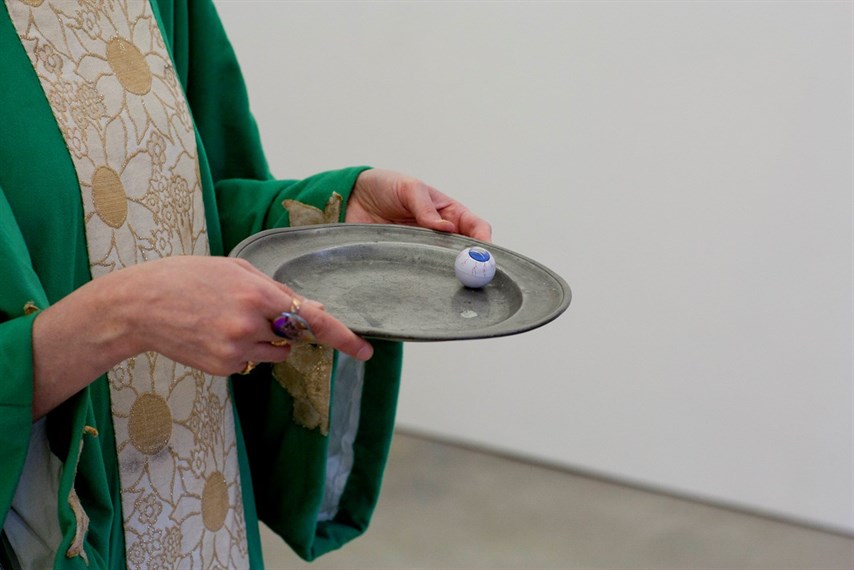 Behind the Curtain, 2015 (Image: Cameron Leadbetter)

The lo-fi quality is important because it points to the impossibility and futility of attempting to replicate something sacred. The props are simultaneously declaring their own fakeness and yet asking you to go along with it. They are determinedly quotidian yet wanting to indicate something transcendental. There’s a humour in them, they’re not really asking to be taken seriously. Furthermore, I like the economy that certain theatrical devices achieve, like a school boy with a tea towel on his head being a shepherd in a nativity play. It’s so simple, but we can all read what it signifies.

I saw that you were on a residency in Spain last year, how did it come about?

The residency was with Bòlit, Centre d'Art Contemporani, Girona and FEM festival, which is curated by artist Denys Blacker. I have worked with Denys before (in 2010 and 2015) and she put me forward for the residency with Bòlit. She is incredibly supportive of other performance artists, particularly women.

I was in Girona for two weeks so it was intensive but productive. The city has a wealth of medieval buildings and museums which I really enjoyed getting stuck into. It also has quite a rich culture of public performance, from the traditional sardana dances to the seasonal religious festivities, so this was a great backdrop for me to work in. I made a lot of drawings and a new participatory performance, A Song of Ascents, at the culmination of the residency. This took the form of a procession up a long flight of steps to a statue underneath the cathedral plaza, during which I shed objects in a manner reminiscent of the souls being cleansed in Dante’s Purgatory. The statue is of the Virgin Mary holding a pear, and I created a eucharist of sorts beneath this using a giant Ferrero Rocher which looked like a golden orb. I also shot some performance to camera video and photographs in other locations, which I’ll be working on back in my own studio. 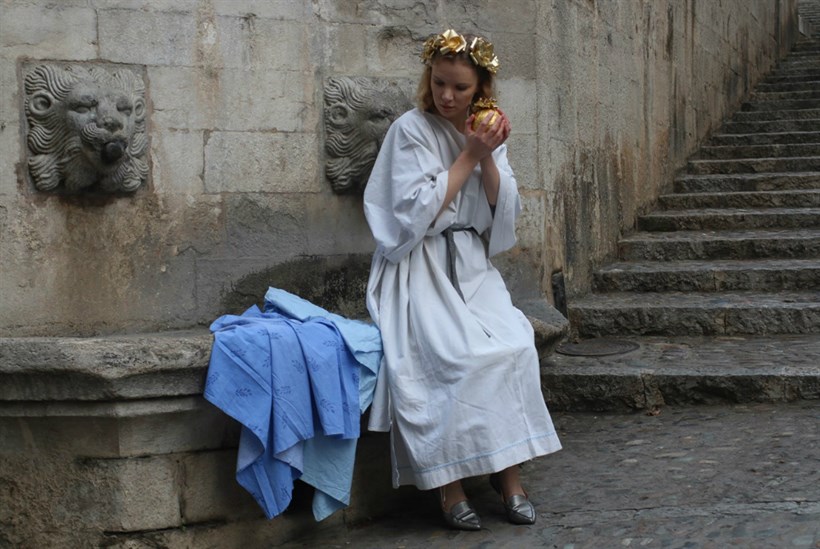 Joan Jonas, for her storytelling, her myth-making, her powerful use of video and performance in immersive environments. Mary Reid Kelley for her unique visual world and her reinventions of literary sources. Nathaniel Mellors for his humorous exploration of cultural recycling and his use of pseudo-authentic sacred objects, particularly in his Ourhouse video series. Susan Hiller for her long career of investigating the inexplicable in ways that are both conceptually rigorous and poetically daring. And Frances Alÿs, for his playful and political use of action, which always has something satisfyingly magical about it.

That said, a lot of the artists I look at are dead (and sometimes anonymous, such as stained glass window makers or manuscript illuminators). At the moment I’m looking at a lot of Carlo Crivelli paintings and getting into his pictorial staging devices. 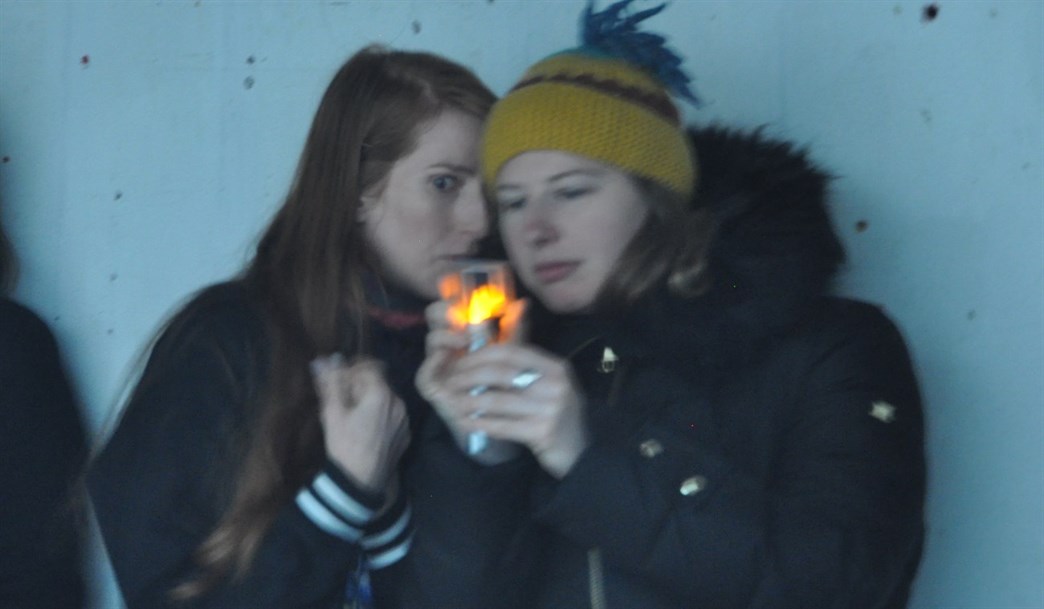 As well as working on the material I shot in Girona, I’m developing a book with Publication Studio which accompanies a recent performance, Knotted Mass II. It will include documentation, drawings, images and texts used in the performance and a new essay by Beth Bramich. That will be launched later this year in London and Margate.

I’m also in the early stages of a new body of work exploring ideas around fertility in ancient traditions and contemporary society.