Artist of the Month
December 2017

Our Artist of the Month for December 2017 is Ewan Robertson. We talk to him about working with iron, reconfiguring sculptures and geological processes.

My main practice focus at the moment is on a singular material, iron, but also extends beyond into ideas about substance, presence, the object and physicality. My interests are pretty diverse. My sources of inspiration range really widely from film, found objects, poetry through to various science fields like cosmology, geology and the quantum world. I really enjoy the process of absorbing new ideas, letting them orbit my thinking for a while and then seeing if there is any way they can be played out in the studio arena. Kind of like smashing particles together to get a new entity, the process of jamming and juxtaposing often dissimilar things together is rewarding and helps reveal where there might be some creative traction. Sometimes it is as simple as reading or looking sideways from an article or piece of writing. Sometimes I explore outwards via drawing but more usually working directly with objects or materials gives a more immediate, direct flavour to the work, particularly when using slower processes like casting. 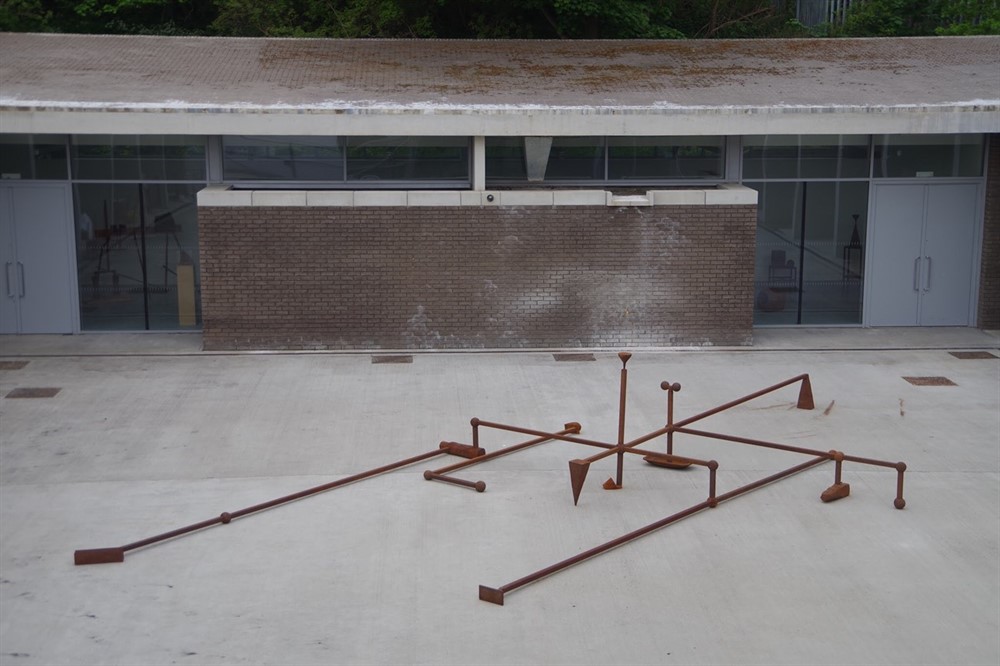 I enjoy the lateral nature of creative thinking and problem-solving and the way it links to other areas of interest like poetry and metaphor. Through being (happily) stuck in an iron groove for a few years, I’ve had the chance to look a lot deeper and see connections appear that I don’t think I would have otherwise, lots of new practice understandings have slowly been emerging recently which is further fuelling my interests and research. The more I look at iron as an elemental material, the more integrated and more complex the connections are.

Tell us a bit more about the Cloud Dialogue work with Gordon Munro – Am I correct in thinking this sculpture is shown in different places in different configurations? What decides the different forms it takes? How did this idea of a developing sculpture come about?

Yes, the original idea was that it was a kind of dialogue between ourselves via the material and that this would in turn allow the inter-connected sculptural form to explore, react to and comment on the space in some way. The end-point objects and connecting nodes are cast iron with differently angled two inch spigots, the connecting lengths are tube steel. The whole structure simply slots together. We were fortunate that the first few public venues offered contrasting uses, feels and characteristics and it turned out to be an engaging and rewarding process almost building it ‘blind’ for the first time. The possible configurations were immediately numerous with originally about 10 cast objects or nodes but after playing with the structure in space a few times, the voice of the work just became stronger and stronger and helped us realise satisfying configurations fairly quickly. 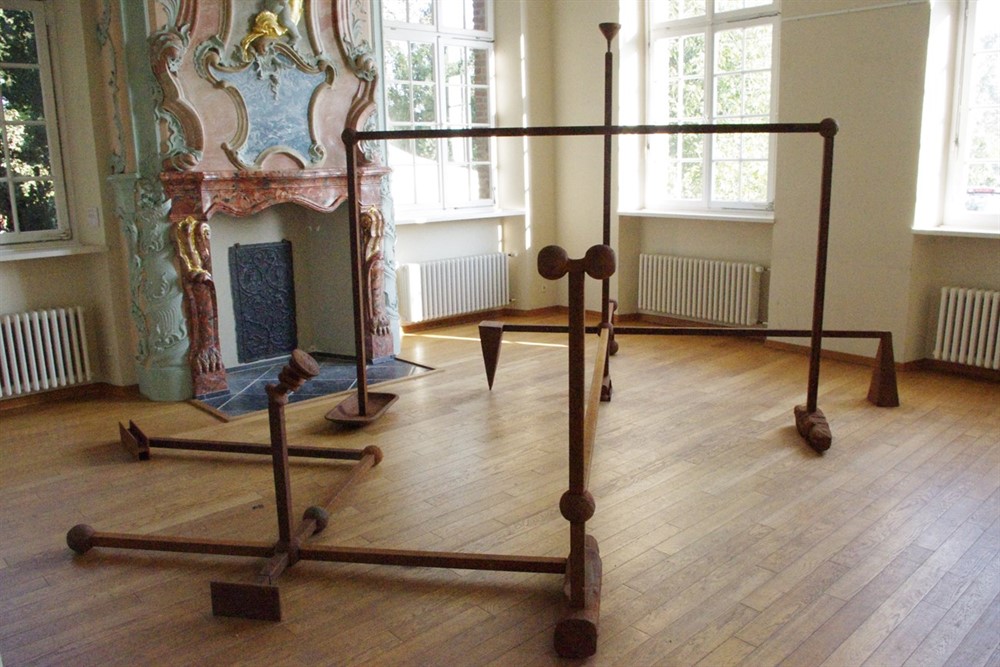 The work also came from teaching ourselves green sand casting and resin bonded mould making techniques with the help of Arizona based artist Aaron Juaris who also helped us make some basic foundry equipment, so the actual cast objects kind of have a ‘locked in knowledge’ which also feels part of the exploration. Gordon had also been making work based on the ideas of Friedrich Fröbel, the early educational pioneer and his Frobel Gifts which linked further to ideas of creative play and exploration at the time.

We are still adding components that change and evolve the direction of the creative discussion and I still see Cloud Dialogue part space interpreter, creative probe, questioning device. Previous iterations of the work have been exhibited at the Royal British Society of Sculptors (London), Haus Hohenbusch (Ekelenz, Germany), Glasgow International and Inspace (University of Edinburgh). 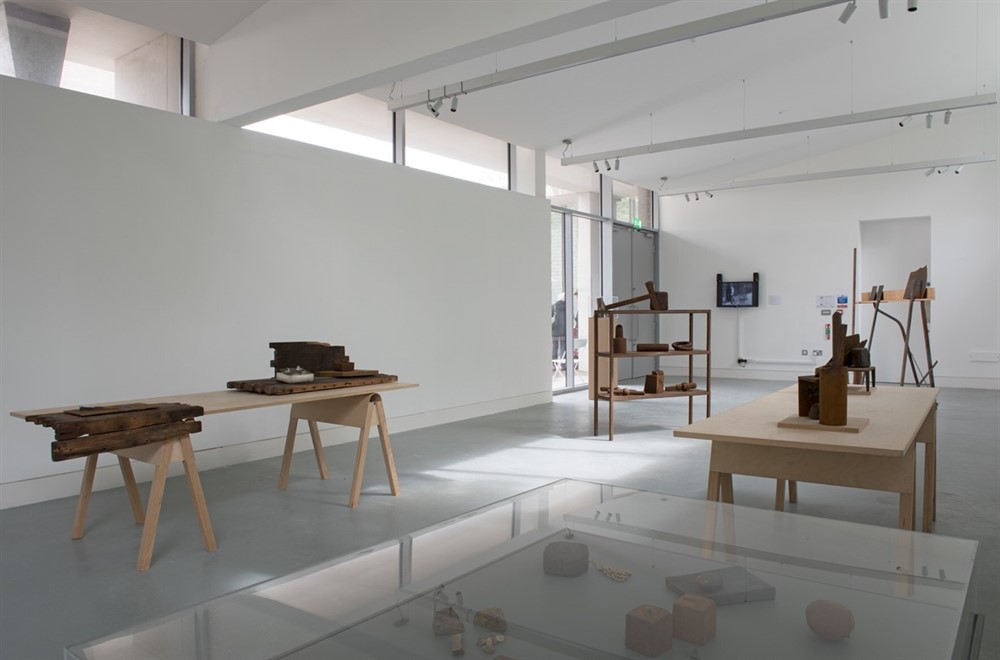 Iron is obviously a key part of your work – tell us a bit more about using iron as a material – what attracted you to start using it? How does it shape your practice?

It has a kind of honesty as a material, a straightforwardness that is difficult to hide or get away from. It is all around us in the world, nails, machines, architecture, your blood, even the earth’s core. It is elemental (i.e. only made from one atom). It formed the gravitational and material building blocks for the Solar System and still falls to earth today in the form of iron meteorites….. that was more or less enough to get me interested.

As a creative material, it simply can’t perform the same way that more plastic sculptural media can, it has real limitations, its brittleness, high melting point, it doesn’t patch or weld easily so you have to develop a more accepting dialogue with it while still pushing it to perform beyond simple function. I’m not interested so much in its chromatic beauty, to me it is a kind of monochrome material almost with the same colour palate as early cubism, from grey to brown, that is just enough to work with, helping to transmit visual information quite minimally, and suits its character. Its other basic qualities like its mass, density and physicality are tied in with (perhaps even the very definition of) presence which is a further fascination for me. In a contemporary art context, its use, ubiquity, placement, longevity and even its backseat role in our world are all areas that have influenced my recent thinking and practice.

Time and history are also important themes in your work – what ideas or concepts are you interested in, and how do they manifest themselves in your work?

Most of the ideas related to this come from practice and more particularly process. It probably has its roots in my early experiments with concrete, its change of state, its nature, material status and again, its longevity e.g. it is speculated that concrete structures in the future, as archaeological artefacts, will be the only evidence that we were ever on the earth in the very long term. I like that you can reach ideas like this via art thinking but in fact this pinged on my radar through popular science journals and organisations like the Long Now Foundation.

The change of state idea can also look back in time to geological processes - rock formation, vitrification, fossilisation. I found a copy of Richard Fortey’s The Earth: An Intimate History a few years back and was transfixed with his descriptions of how, for example, minerals kind of precipitate out of a ‘stew of molten rock’ over many hundreds of thousands of years (The work The history of Chromates emerged from reading this book).

I started looking at monumentality and longevity of objects after helping install a John Latham show here in Edinburgh and hearing his ideas on time both in art and science. More recently I’ve looked at Beuys’ thinking on looking forward and back in history by filming his Tramstop: A Monument to the Future, 1976 in Hamburger Bahnhoff, Berlin with Gordon Munro. Being in front of the work thinking, experiencing and reacting was important and helped lock in a better understanding that iron could almost be used as a documentary material, a bit like plaster can be used as an intermediate material to carry a form. It is a seminal 20th century work in iron.

My latest inroad into thinking about time has come from a recent Bill Morrison documentary, Dawson City: Frozen Time, (2017) an unusual and totally absorbing historical and material story, 533 single reel 35mm silent films on nitrated base re-emerged after 50 years in the Yucon permafrost. It is an amazing film in its own right but also an interesting way to reflect back on the last hundred years of human history through a fragile, fleeting and flickering medium. Film is such a powerful communicative medium, time and its processes here are much more visible, visual and poetic. 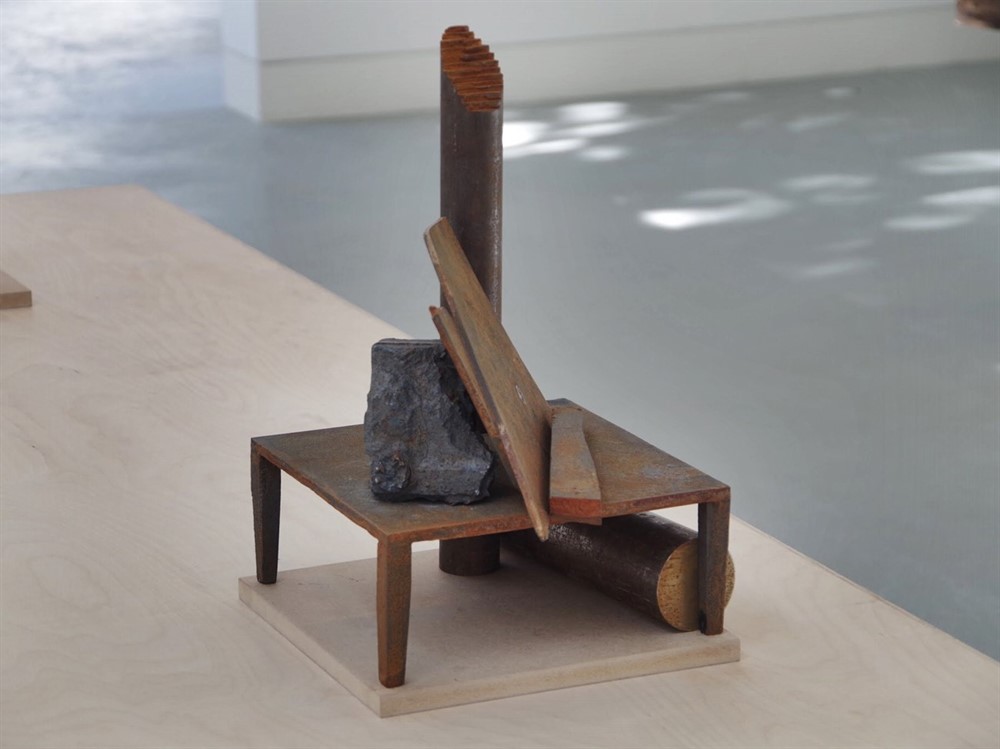 Cady Noland’s work has always been a big unstated influence, and I’m not sure if I can or want to pin down the exact reasoning for it, it just resonates whenever I see it. I first encountered it in an underground carpark in Kassel, Germany I think in 1991, a battered transit van on its side on pallets adjacent to an ambiguous film noir narrative and Jack Nicholson’s grinning face painted fairground style on billboard ply really lodged in my creative consciousness. Peter Schjeldahl, American art critic describes Noland as “the dark poet of the national unconscious” which you can’t argue with.

I keep an eye on Mark Manders work, I like how it stretches the idea formal enquiry, often through more-lower key materials and objects. It kind of makes the gallery feel like a chessboard mid-game.

Two life and art affirming works of the last 10 years that I found incredibly powerful have been The Murder of Crows, (2008), Janet Cardiff and George Bures Miller. A really affecting sonic experience in space. Also Mike Nelson’s Kristus Och Judas: A Structural Conceit (a performance in three parts), (2008-10), I’ve never been so lost inside myself in a gallery for so long, a masterful work.

Iron: Artefacts and Actions opens in January at the Park Gallery, Callendar House, Falkirk. This is a joint show with serial iron collaborator Gordon Munro and a continuation on from last year’s wide-ranging Iron: Origins and Destinations, where we ran a series of events including an Exhibition, Symposium, Publication, Practice Workshops and Archival film screenings all of which probed further diverse situations and areas where iron has some influence. We also commissioned a short film by artist/filmmaker Rachel Nolan about the diversity of our iron-related practice and research.

The new work currently in production for Iron: Artefacts and Actions responds to and explores Falkirk Community Development Trust’s extensive archive of iron artefacts, patterns, photographs and written material relating to the many foundries and related industry that thrived in the surrounding area when iron production was in its heyday. New objects have been created in response to trawling this important archive and these will be contextualised via a modest publication.