Artist of the Month: Townley and Bradby

Artist of the Month for October 2016, Townley and Bradby talk to us about public spaces, domestic routines and creating art as a family. 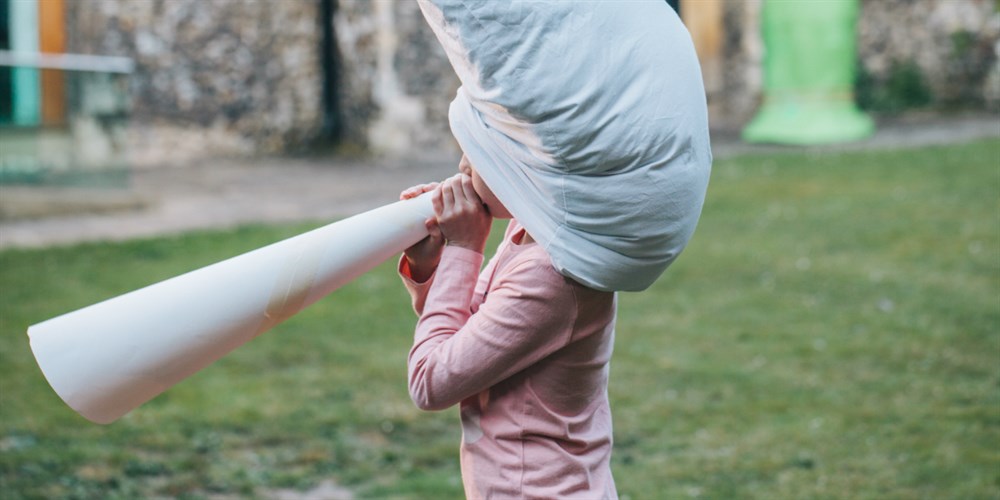 We make work in spaces that are already being used by someone else.

When we started working together, in 2003, this meant finding new ways to occupy public spaces. We made a treasure trail for a library. We devised and then staged participative games to play in shopping malls, markets and streets. We made large site-specific drawings in city squares.

More recently, since about 2010, the site in which we make work has shifted: it is now the family. By this we mean our home, where we and our three children spend much of our time, and also the social and cultural institution of the family. 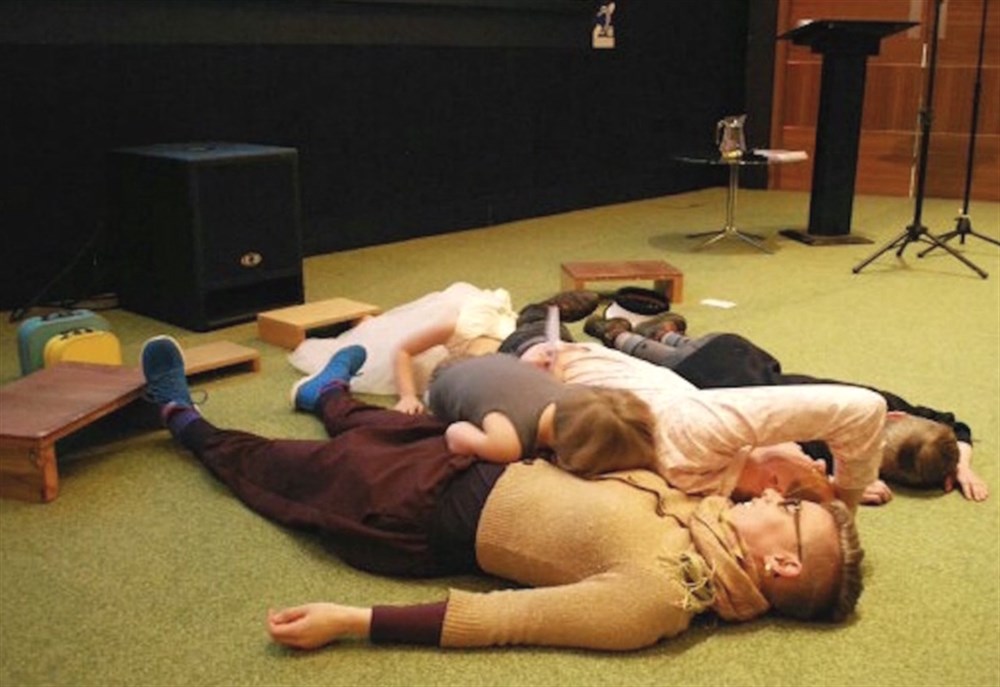 Here's a few of the themes and process from our work:

Domestic Repetition and Do-ability –  For several years we have been developing artistic forms that are driven by domestic repetition. We aim for these forms to be 'do-able', that is achievable within, and as part of, the on-going domestic chores. Although it occupies short, disconnected periods of time, our practice makes use of long timescales. It is cumulative over weeks and months.

Auto-ethnography – Recording our children's activities, the creative ways they use domestic space. Widening our scope a little so that we, the parents, are also recorded, represented, transformed into drawings or films or performances.

The Exploded Studio – Our practice shares thinking space and living space on equal terms with cooking, washing, cleaning, parenting. Our studio or working space is by turns the kitchen table, the bedroom windowsill, the gap underneath the sofa: it moves about with the activities of family life.

Creating Works as a Family – In the last few years, our children (currently aged 11, 8 and 3) have decided to become more involved in the decision-making, shaping the way that artworks are made. This has a particular influence on performance pieces, such as BED and Everybody Questioning. 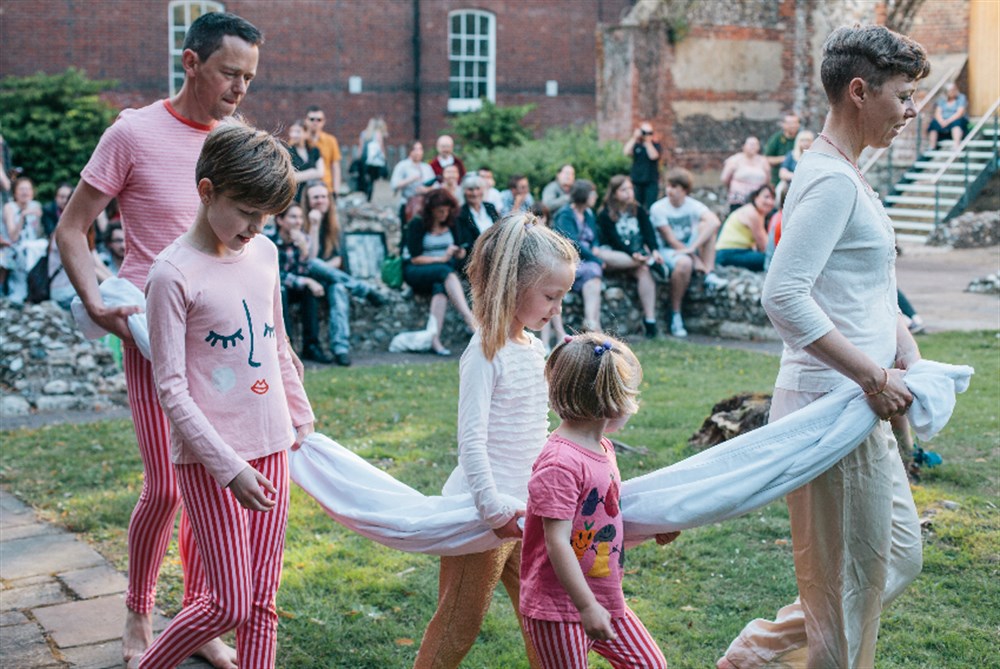 How does working with young people shape the outcome or processes of the work? Why is it important for them to be involved in these projects?

Children can take immediate pleasure in new materials and in the possibilities that materials offer. As adults and parents and artists, we benefit from proximity to this experiential and embodied knowledge. It's a form of Child-led CPD for artists.

Robert Filiou spoke of this creative impulse as 'genius without talent.' He thought of 'talent', by which he meant technical ability, as frequently restricting our innate 'genius'.

As well as an appetite for material exploration, children occupy a different temporality. The adult act of art-making is bent towards a future moment: the moment of display or the moment of placing the object within an art context. Children don't make art, they pursue creative explorations. 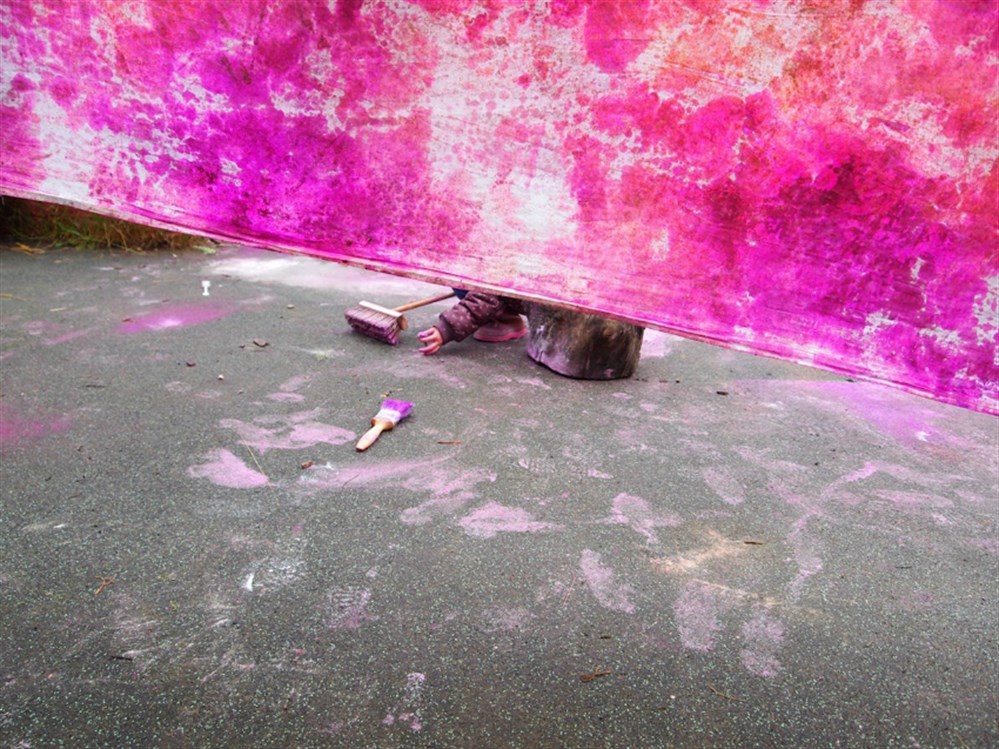 We are currently in the process of assembling an exhibition to represent an eight-week project in an Early Years centre (Earlham Early Years Centre, Cadge Road, Norwich). We have various things that were used or altered during the project: some 4m-long rolls of paper that were wrapped round a tree and painted on; two bed sheets on which pigment was scattered and spread about with brooms; two sacks of tyre trims contributed by artist Jevan Watkins Jones; and photos of the drawing and painting in progress. Our task is to pick out images and objects that capture the unpredictable energy of the children's explorations during those eight weeks.

Going back to your question, we should point out that the young people we work with most often are our three children. We work with them because they involve us in what they're doing. We're parents so we have the everyday experience of drawing, arguing, tossing things around on the floor, inventing new words, laughing unstoppably at a mispronunciation, and all the other things that children do. We try to use this as material. For example with ICANTHEARWHATYOURESAYING (2015) we took the complex and conflicting vocal textures of our evening family meal and fashioned them into a vocal score for 5 performers. The five parts of this piece are simply called 'Voice 1', 'Voice 2' etc. The lexicon and tonal range of each Voice is derived from one member of our family.

Because our art practice is grounded in the domestic it has layered authorship. Everyone in the household can claim to have influenced the creative decisions. There is a shifting agreement about the purpose and value of the practice. Overlapping authorship and conflicting understandings means that there will always be artwork emerging from such a practice that is unshowable, or that remains unshown. 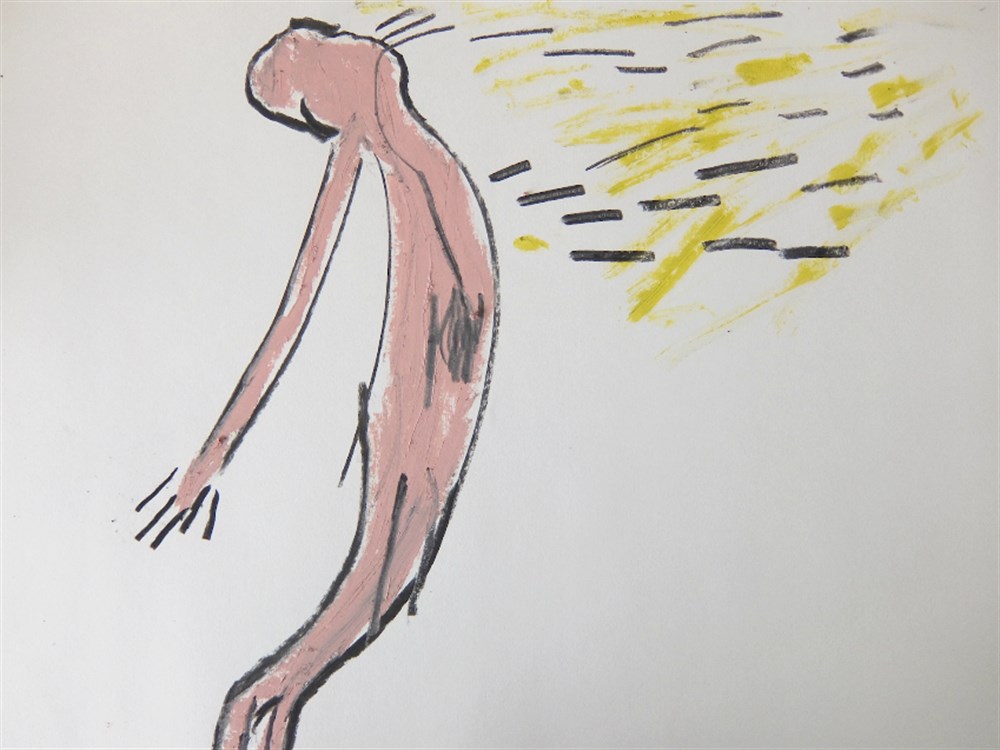 Play is a significant process within your practice, tell us a bit more about creating the conditions for good play.

For children, play is often a means to explore the material qualities of their surroundings. It can be an open-ended investigation of what is possible. Play theorist Fraser Brown writes that for most children play is ‘the only experience they ever have of being in control of their own world.’ For adults, play is more often an engagement with others through established traditions and agreed rules. So the conditions for play partly depend on the age of the participants.

We use play because, paradoxically, by setting up rules or conventions, the players can feel in control. We also value play because it circumvents intellectual responses to a situation or an artwork. Play allows another route to understanding ones own responses. Play creates a temporary world distinct from ordinary life. Johan Huizinga described this as the secludedness of play. He wrote that a game is ' “played out” within certain limits of time and place. It contains its own course and meaning.'

An example in our practice is the Conversations After Dark (2010). This was 'a guided tour of the Cambridge night' made in collaboration with curator Jo Mardell. We used a series of playful strategies to experience that doubled hour when the clocks go back, and the same segment of time, from 1am to 2am, is somehow lived through twice. 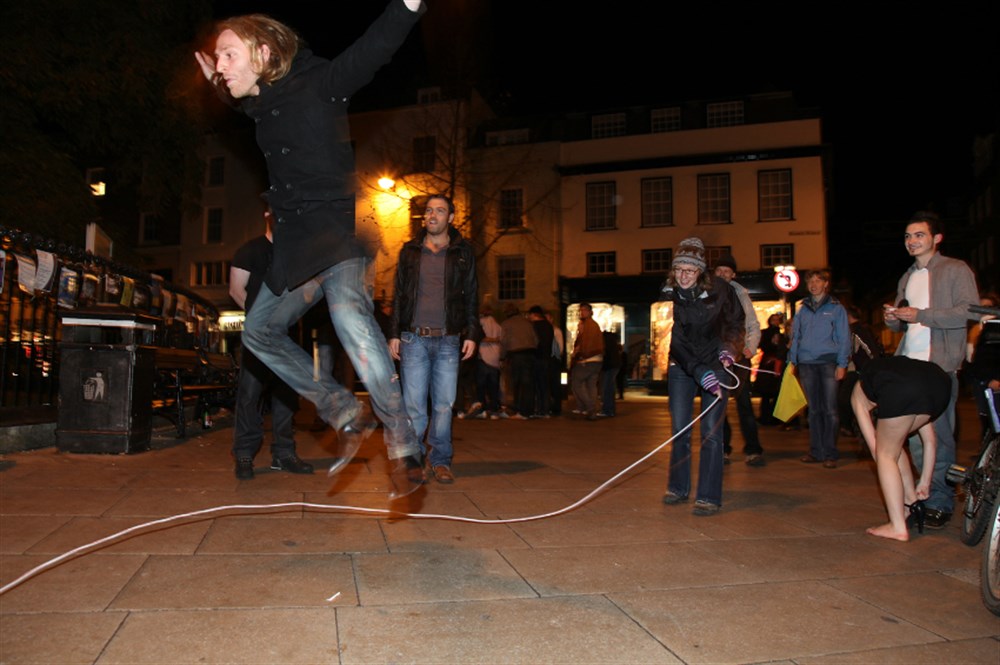 Much of you work takes place in a public and shared spaces, what makes these sites most suitable?

We like using public spaces. It introduces an element of unpredictability about who will encounter the work.

The risk for artwork in public spaces is that it can seem inconsequential or irrelevant when placed in the urgent flow of people's daily routines. Or, lacking the labelling that you get in a gallery, the work can be missed altogether. The benefit is that those people who do notice it, and have time to move beyond noticing and engage imaginatively, will draw on a far wider range of cultural and autobiographical references than they would feel entitled to in a gallery.

Although we're setting up urban public spaces as the antithesis to gallery spaces, it can also be useful to think of them as two versions of the same thing. Like galleries, urban public spaces have guardians, and rules, and conventions. When you're making work for these spaces, you have to decide how to negotiate or circumvent these things.

John Akomfrah, Lenka Clayton, Jochen Gerz, Tierney Gearon, Yifat Gat, Hilma af Klint (not contemporary, but we've only just discovered her, thanks to a piece in the Sunday papers, and the show at the Serpentine), Kristin Ross (her book Communal Luxury is inspirational), Lyndsay Seers and Lexi Strauss. 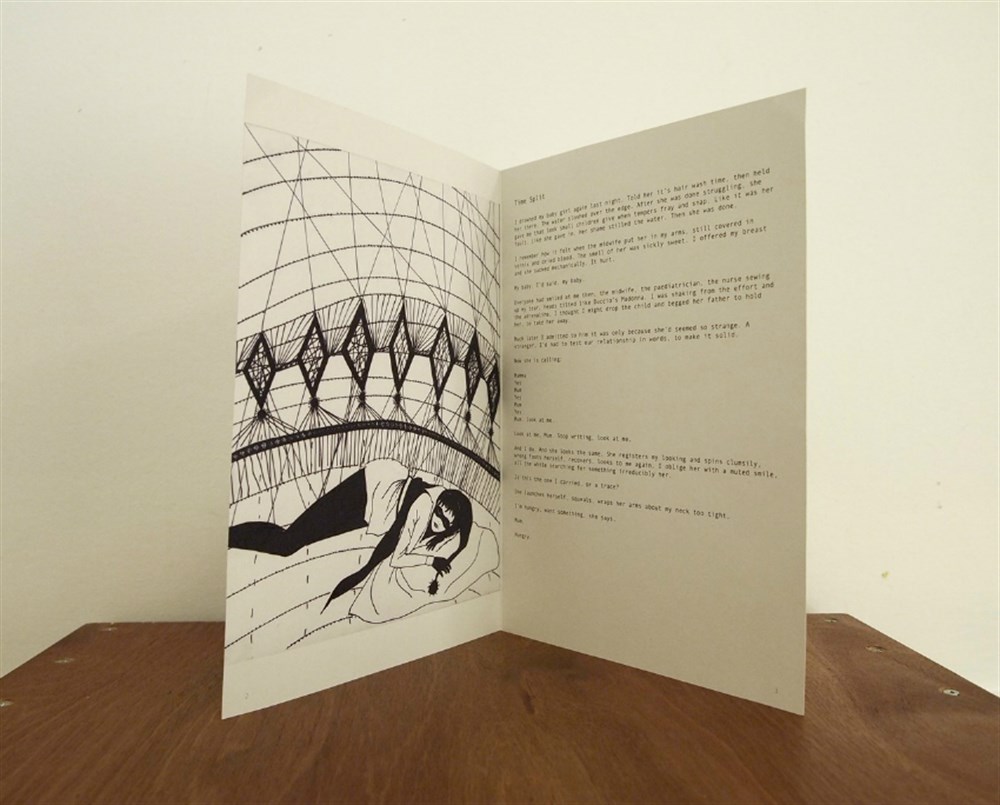 During October we have a film, Between Waking And Sleeping (2013) being screened as part of an on-line showreel in the Brood Film Festival.

At the end of October we'll be sliding 90 copies of our quarterly publication, Brood, into envelopes. (The two Broods, film festival and publication, have no connection. The film festival is run by artists Mila Oshin and Kris Jager. Independently they and we plumped for the same resonant word.) We started our Brood about a year ago as a tonic to lift the bilious disappointment of rejections. Each issue costs about £250 (printing and postage). It's entirely self-funded allowing us to set the rhythm of publication/presentation.

We invite two artists for each issue and give them a page a piece. And it's black print only, so they're working with a restricted format. So far we've had work from Rachel Fijalkowska, Leah Lovett, Nicola Naismith, Search Party, Sally Davies and James Wilkes, The Institute for the Art and Practice of Dissent at Home, and from our eldest daughter Hope Bradby. Each issue also has something by us. The upcoming Issue 4 will have pages by Judith Stewart and by Helen Sargeant and her son Naoise.

In the spring we will begin working on Playing Out, a two-year programme at MK Gallery. The gallery has a major capital expansion project running until 2018. Alongside this is City Club, a large-scale commission by Nils Norman and Gareth Jones addressing the public realm immediately surrounding the gallery. Playing Out will be a part of City Club. We will have freedom to find ways to work with families to explore the public spaces around the gallery and in neighbouring residential estates. We will try out different spaces as sites for play and for site specific performance. It's wide open in an exciting and slightly scary way.

A fourth thing coming up, though more fluid than the others, is a showreel of artists' films about children's play. We're working with curator Oliver Sumner to assemble these, with the working title of Adventure Play. 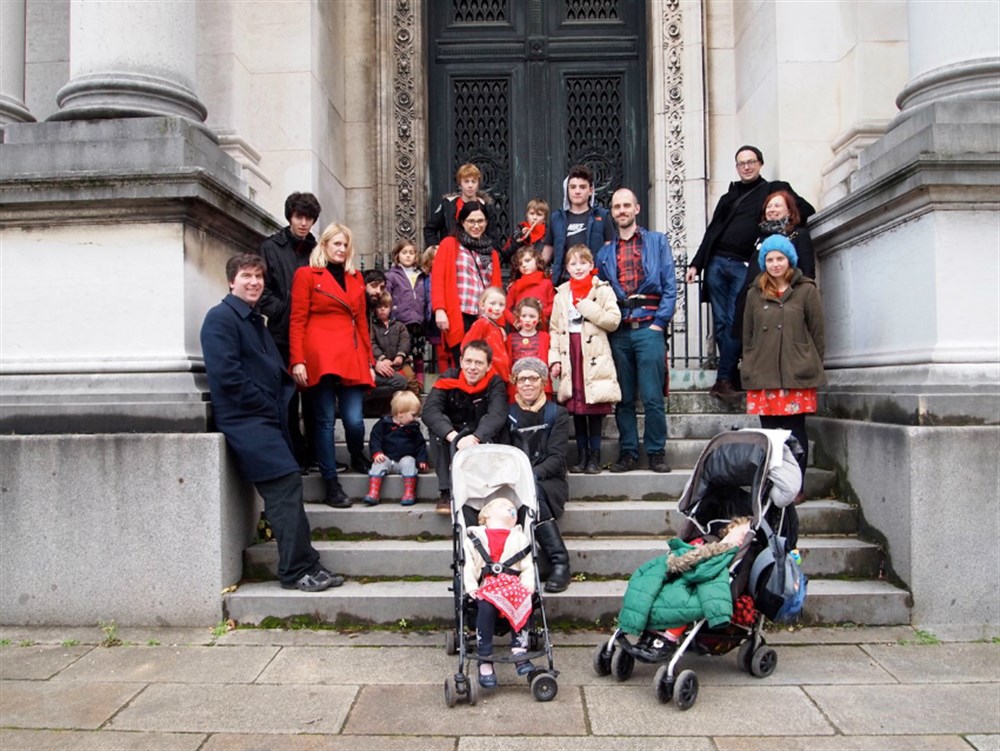