Artist of the Month: Claire Hope

We talk to Claire Hope, our Artist of the Month for December 2016, about the production of images, power and constructing relationships. 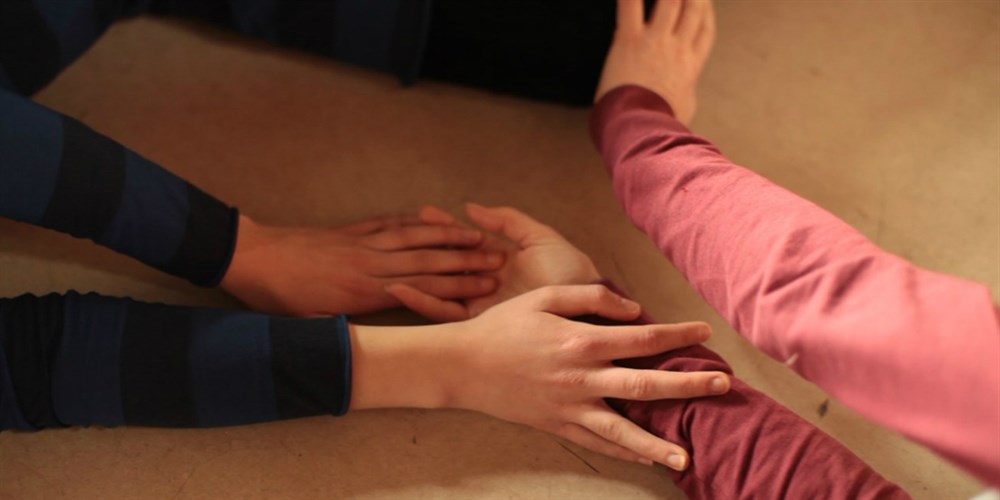 I make digital videos and live performances that stage interpersonal situations to highlight their particular dynamics - a key focus being manifestations of inequality and experiences of power. Scenarios are realised collaboratively, with actors, students and non-professionals - I also perform myself.

I am interested in how economic factors underpin personal situations and how variances of power are manifested between people. Gender is important to the work; I want to question how it is performed in life and culture and re-stage alternatives. Overall, I want to explore how the personal can be figured or explored in a structural way.

I treat performance as a propositional medium - enabling me to collaboratively rethink or play out alternatives to contemporary situations, to change them or suggest changes to them; I try to provide affective responses to contemporary problems.

There is a process of exploration that is at the heart of the work, which is currently leading me to expand the media that I use - where the appropriateness of the medium to the nature of the project is more important. This is also relevant to the broadly self-reflexive process that I take to media - that is the associations of a particular medium are important to the final work.

I am interested in what is organic about an art practice: as I grow, learn and change my perspective shifts and the way in which I conceive or might produce artworks alters. 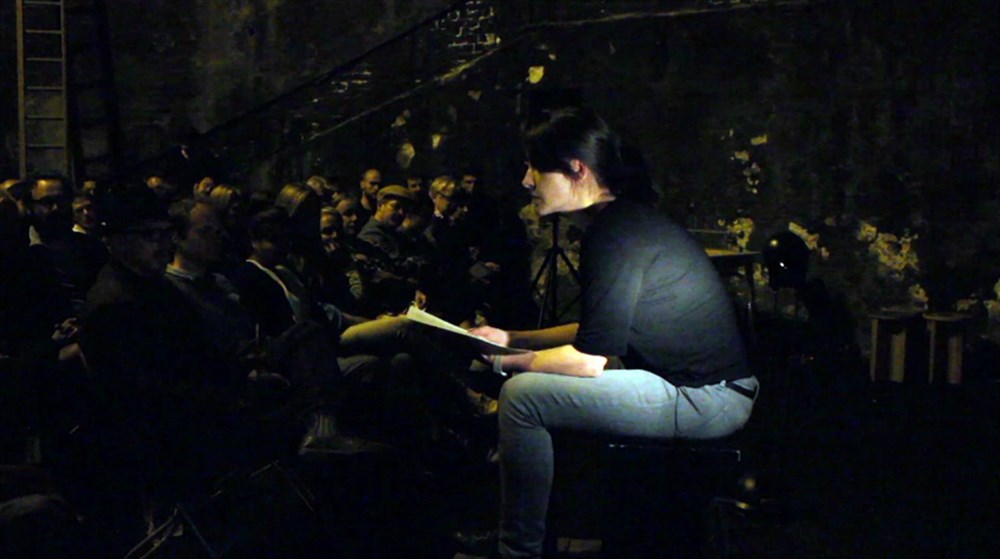 My work is a response to visual culture, and the status of images and artworks; I am really interested in how human relationships and situations are depicted in images - by us, or for us.

I am often motivated by what is absent from images, or what images or media aren’t used for. I tend to respond to what already exists in the world, whether that is a situation or image; appropriation has been an underlying process for me, as well as re-enactment and re-staging - albeit in a way that is more so informal.

My artworks often respond to actual events or situations - acts of witnessing and ideas of truth, honesty and an affective form of validity underpin my work. 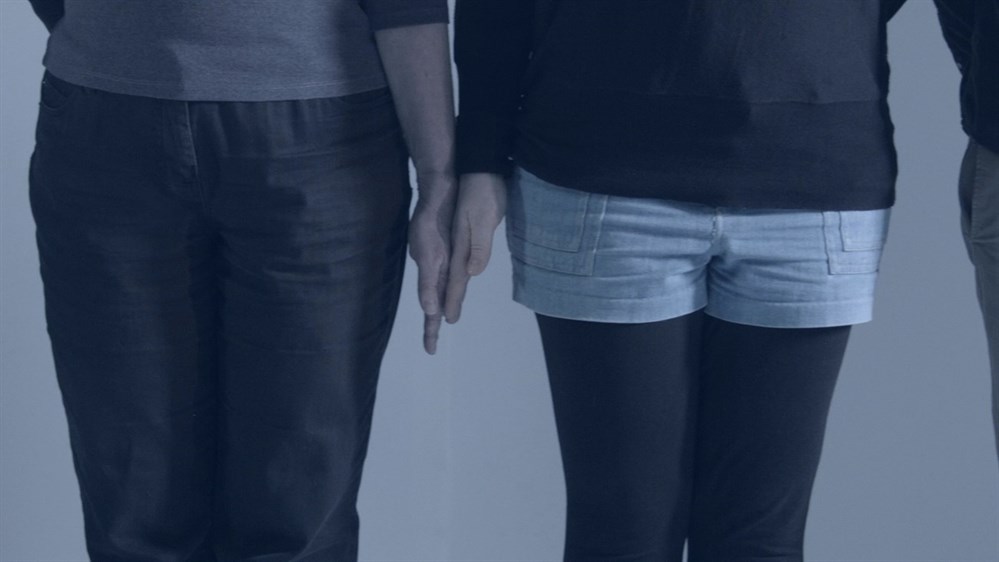 Your work considers the interactions or relations between people, and what combinations of factors have an impact on this, such as work or romance, and also the presence of a camera or audience. What interests you about these particular relationships?

I am really interested in the particular dynamics that govern interpersonal situations. I treat personal relationships as political and also as founded in economic realities such as inequality and variances of power. I am particularly concerned with gender and current work that I am developing takes a politicised perspective on inequalities in intimate relationships. I have often drawn from visual culture and the media - comparing depictions of relationships there, to how they manifest in life.

My recent film Contact, 2016 sought to depict the creative types of bodily interaction found between attached people in life, that tend not to be depicted in visual culture or social media.

There is an implicit critique of work in my own artwork, the way it is conceived for a majority of the world population. I am focused on the unequal expectations placed on different groups as to their expectations of work and one of the aims, or hopes, of my work is to rethink notions of work, cooperation and collaboration in ways that are sensitive to the needs of bodies.

I treat the production of images and artworks self-reflexively, in ways that explicitly reveal their construction. My presence as a maker is often heightened - such as in artworks that are highly directed and may involve specific technical or aesthetic decisions - and I personally implicate myself in others. The intention of this to highlight what is subjective about image production, also to root what I do in a form of affective validity.

Viewing and spectatorship have been a key focus for me; much of what I produce takes a self-aware approach to ‘being watched’ by a viewer. I have been interested in exploring inequalities between viewers and the people they watch; that is how these can be experienced affectively by viewers. A particular interest for me has been rethinking images from the perspective of viewers with little social or economic power. 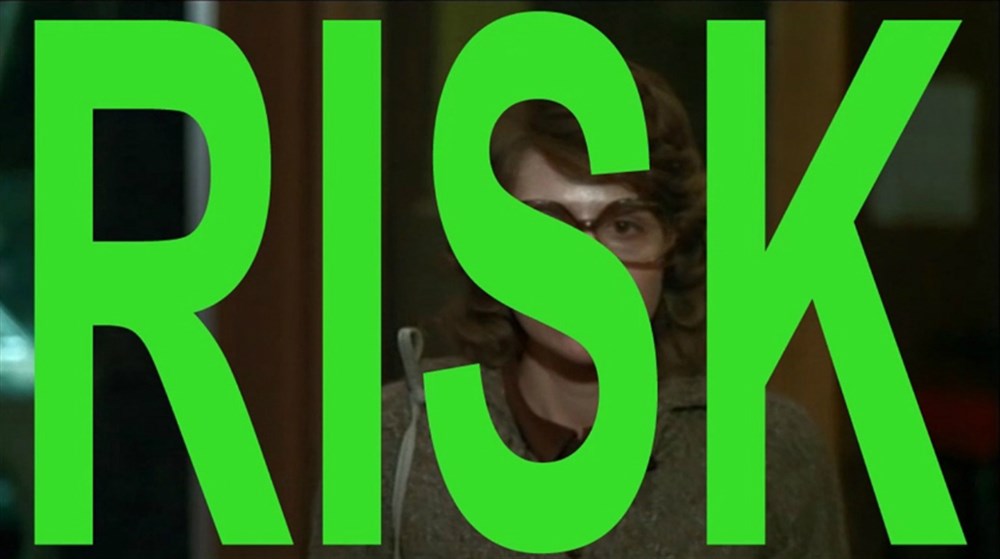 In your statement you refer to your work ‘implicating the production of images in a form of class system' which is a really interesting point. Could you tell us a bit more about this?

When I produce images in my artwork I do so in a way that is deliberately restricted; I treat the production of images, and in particular images of human life, as political. At a moment when the production of images is so ubiquitous and user-generated I am interested in the specificity of image-making and how artworks can question the status of the image and challenge it. I am very interested in what is expected of an artwork today, and one of the things that my work does, and always has done, is respond or react to its context.

When I say that I implicate the production of images in a form of class system, I refer both to the economic imperatives underpinning the production of all images (including social media), but also the kinds of human situations that are depicted in images, how deliberately different they often are to day-to-day experiences of capitalist economies. I am very interested in what is depicted in visual culture and social media - and what isn’t; there seems to be much that is absent.

Much of my artwork has deliberately set out to show something that is not seen, i.e. in my 2008 work Complex Financial Instruments I set a private business meeting, that referred to the realisation of a landmark building in London, against a series of images of different kinds of built and architectural sites in the North of England. I was interested in the literal architectural inequality between north and south, as well as the kinds of power that are not visible to us, that involve significant decisions being made behind closed doors. 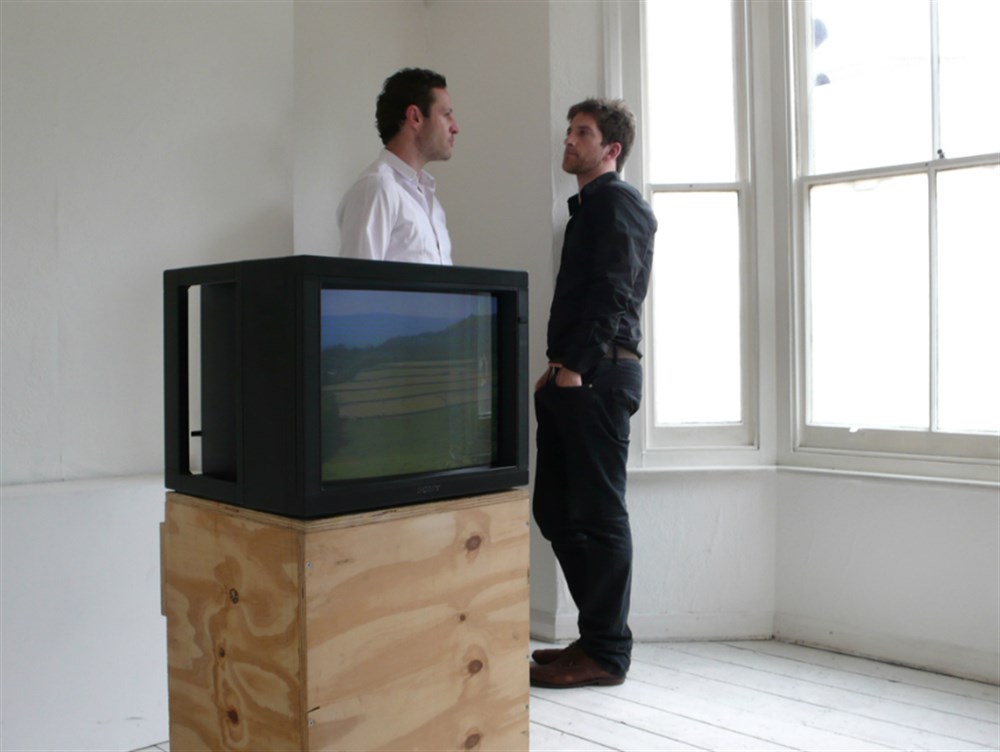 I have often produced lower quality images in my artworks, in a way that was intended to undercut expectations of quality, also to literally disappoint. More recently, in high definition, I am addressing the capacity of this type of image to scrutinise its subjects and to see more than we would in life. I am now working on a project that poses art objects as chauvinistic interlocutors in a digitally designed environment - I am interested in using media in ways that respond to our expectations of that medium.

When producing a film with actors or performers, how much do you plan shots and actions beforehand, or do you tend to set situations and allow them to take the lead more?

I have used different approaches for different videos. For instance, in Sky High Quality and In Great Shape, 2011 the actors improvised dialogue based on pre-defined scenes. Yet live performance A Determined Search beyond Romance, 2010 was fully choreographed, as was my 2014 film Group Photo. Contact, a commissioned video produced this year was a deliberate reaction to the high degree of planning of Group Photo. This was also more possible due to the extended nature of the research project. The final footage was produced during a workshop in which actors and BA Fine Art students collaborated by improvising gestural responses to one or two line instructions that I had given.

I am really interested in this way of working - it worked well by enabling the performers to develop a natural rapport through collaboration. My work has been concerned with matters of power and control since its inception, in particular making explicit the decisions that are made when we decide to depict something. As such my role in the production of artworks is always something that I am aware of - Contact became a specific response to this awareness. 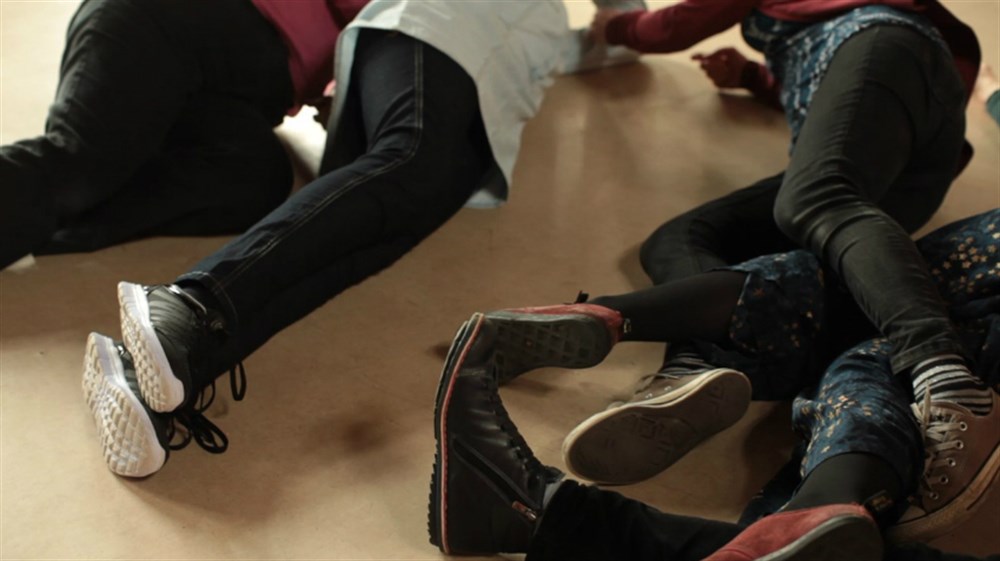 I was influenced by seeing Yvonne Rainer’s Trio A Pressured performed in 2010 at Tramway Glasgow. I have been a follower of her choreographic work, but to see it performed live by a group of dancers had an effect that I hadn’t envisaged. I knew that Rainer’s work responded to cultures of spectatorship dominant in the 1960’s but the impact of the deceptively simple, yet technically challenging, interconnected choreographic movements with the important averted gaze of the performer in a live space produced a really physical affective response in me.

My recent film Contact set out to explore some of this territory; choreographic improvisation that is a direct response - and alternative to - how we usually encounter people in images.

Jerome Bel is an interesting practitioner for me. The cross-over between choreography, theatre and dance as it flexibly relates to an art context is something that interests me a lot. I saw his Disabled Theatre, at Documenta 13 in 2012 and felt it as a provocative challenge to received thinking, stereotyping and discrimination surrounding disability.

I admire Henrik Olesen’s practice. Olesen is often addressing personally charged material and I like how he utilises the context of an artwork for this; the work is playful as well as unsettling, disrupting associations with an artist’s use of images, or media.

I really admire Hito Steyerl’s moving image work; her exploration of the status and circulation of images in the contemporary moment, realised in really engaging videos interests me a lot. She often engages with a subject through indirect means, such as in her video Guards, 2012 which explores the intersection between national security and the securing of artworks. Her critical writing is also really relevant and I like how her writing so evidently feeds into and informs her artworks.

I have been very affected by Jordan Baseman’s videos. I saw July the Twelfth 1984, 2004 at Matt’s Gallery during my MA at Chelsea College of Art, in which we hear the countdown to an execution of an American prisoner. The work is a powerful critique of the death penalty, and has the impact it does very much due to its absence of imagery and specific use of text. Similarly, Baseman’s video The Last Walk, 2011 used imagery in a very sparing way, combining a traumatic story told by Stuart Brisley, with stunning abstracted images that allude to structural film. This combination of high affect aural material and limited use of images is something that really interests me, particularly by resisting the cinematic expectation of an image that aligns with the sound. 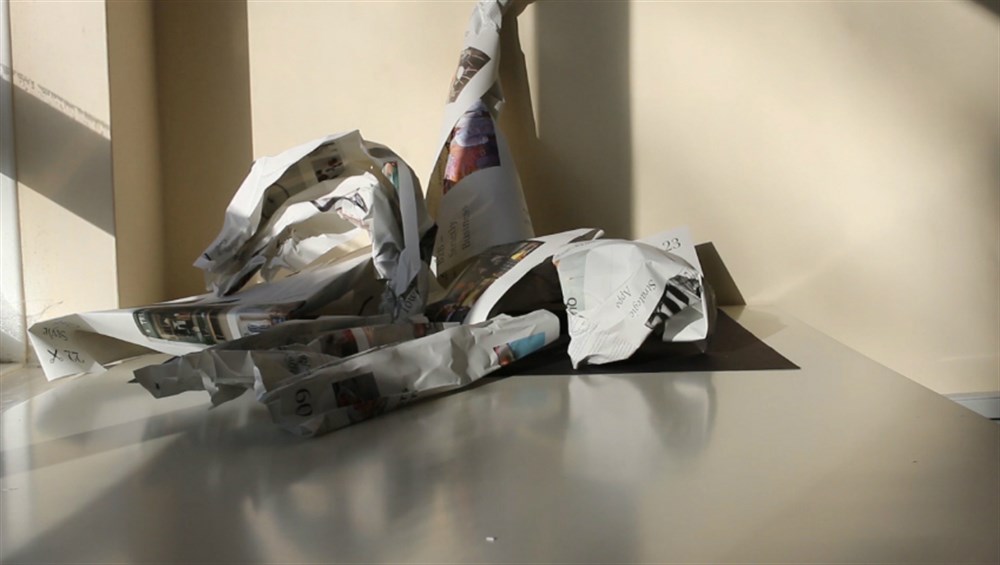 I am very pleased to have been invited to present at The Showroom Gallery, London as part of a weekend of events Here is Information. Mobilise (2-4 December 2016), that celebrate the life and work of artist, performer, curator, teacher and writer Ian White, following his early death 2013. Ian led the LUX Associate Artist Programme which I participated in (2007-8). Continuing from the last question - Ian White’s solo performance practice is the art practice I most admire; his work was a really astute response to matters of power, authority and discrimination.

I have initiated a new body of affectively charged work that spans publications, object-based works, live performances and moving image. For instance, I recently produced the first version of a digitally designed interior with objects, using 3-D design software, that stages an implied interaction rooted in differences in power.

I am really interested in exploring enduring concerns about inequality, power, gender and affect - but in ways that challenge how images, and artworks, are conceived. I am excited about exploring opportunities for exhibiting and distributing this new work over the coming months.