All that Glitters is not Gold

I made my way to Venice expecting to see art which responds directly to the current situation of extremely volatile world politics, the rise of fascist parties and the refuge crisis. As Jeremy Deller said in a talk I was at last week ‘these are good times to make art’. There is so much going on to notice, be angry about, and make art that is radical. Surely now is not the time to fill galleries with ornately decadent sculptures, which hark back to some romantic idea of past civilizations where everything was beautiful and sumptuous?

A few weeks before the opening of the Biennale, Damien Hirst’s project Treasures from the Wreck of the Unbelievable had its press launch. Suddenly my social media feed is full of pictures of people wearing expensive designer clothes, posing for selfies in front of gigantic sculptures of monster encrusted in barnacles. How very odd I thought. I looked at these glimpses of the works with cautious enthusiasm; there seemed to be a rich use of mythological references, beasts and legends which seemed like an exciting departure from his previous work. Could all the hype be true? I asked myself.

Once you have parted with your €18 to enter the show, the first thing which greets viewers is the giant 18 metre-high Demon with Bowl bronze sculpture. I look up to see a cock encrusted in calcium tubes, which look a lot like worms. The penis points down at me in an almost godlike gesture damnation to all who enter. This work could be read a one massive self portrait of someone with a serious ego problem. I am told it references William Blake’s The Ghost of a Flea. However, whereas Blake’s original drawing is all about mans’ weakness in being overtaken by his animal instincts, his vision of a flea being inhabited by the souls of bloodthirsty men. The guide for this exhibit suggests it is a demon ‘figure which served as a guardian to the home of an elite person’. A potential buyer will no doubt will enjoy reading this I guess? 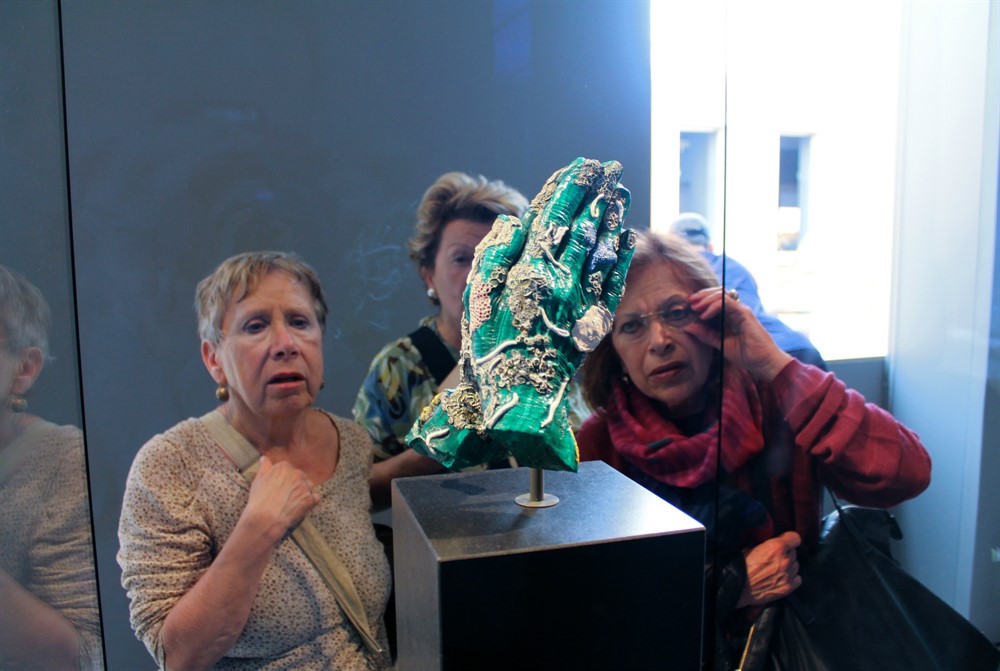 Visitors looking at Treasures from the Wreck of the Unbelievable. Img. Nicole Mollet

As I wonder around floor upon floor of this first space I become accustomed to the kitschy dramatic poses of extreme moments. Andromeda screams, eyes shut in terror as she is about to be eaten by a sea monster. I can’t help but notice her porno-ready breasts, complete with erect nipples, and gym-toned body. This is supposed to be hailing from 2000 years ago, yet it feels more like something made for Hollywood today. The shiny swirls of water, are clunky Disney simulations of the real thing. Everything has been perfected to beyond the real, neatened up and botoxed to look pretty. I am starting to know how Andromeda feels, I wince and look away.

In between the comedy gods, unicorns, and other mythical beasts embellished in cast corals there are items such as flints, jewellery, tools and coins. To somehow give authenticity to the more fantastical objects, these vitrines are each given a museum-style interpretation signs, which often reference other cultures to give them credence. Most visitors rush through these rooms, eager for their next hit of spectacle.

Should I care whether what I look at holds some form of truth within it or not? So much contemporary art is based on fictional narratives nowadays. What does it matter, when you can be wowed by scale, titillated by nudity, dazzled by the glint and repulsed by the grotesque?

The next day I decide to go and see Rachel Maclean’s Spite Your Face. This work is based on the original Italian folk tale The Adventures of Pinocchio, and is a contemporary fairy tale. There is no start or end to this circular film piece, which lasts approximately 30 minutes.

As I arrive as the main character ‘Pic’ has his fall from grace moment. Having reached ‘the world above’ and gained power and fame, his game is up when he is unmasked.

The world above scenery has strong Venetian feel, the people there have gold or silver skin, wear wigs and masquerade masks. The lower world, is dirty, dark and dismal with Escher-like distortions, and inhabited by menacing looking gangs in monk-robes lined with tracksuit stripes. 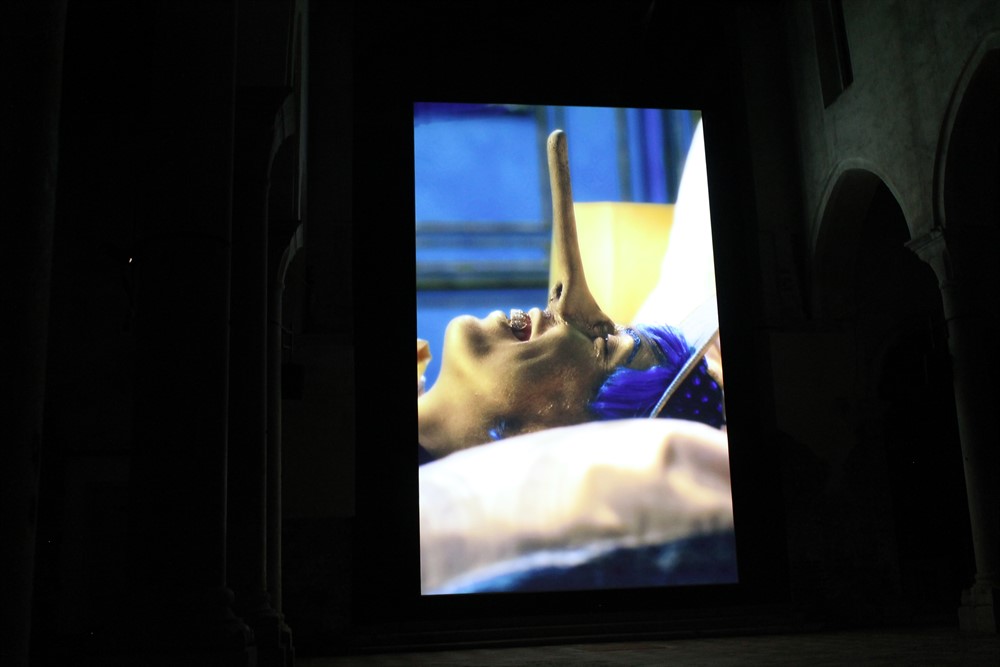 This singular work is rich with so many ideas. The basic structure of two worlds so divided by inequality and wealth. The mass of people gathering around a preacher who rants on about the ‘scum’, inciting hatred and othering those that do not fit their narrow definitions of normality. The allure of wealth. The promise of escaping misery by signing a contract, but do not read the small print. Just play the game, click accept and all you want will be yours. Echoes of obscure commercial TV channels, and designer fashion shops all merge into one hellish vision of consumerist society. The main character can buy what he likes with his credit card, but each time he does, a flash of a self-harming wound appears on his arm. The short-term reward of shopping so brilliantly summarised in a horrifying manner.

The sexual scenes are both disturbing and amusing. The main character Pic discovers that he can pleasure himself, his ridiculous nose taking the role of his penis. Then the obvious shame of being discovered in the act, by the mother-like fairy character. The power roles revert when he rapes her with his nose, but they switch again, when she later grabs him by the nose and forces him to confess. The script is rich in metaphor and allusion to bureaucratic bullshit we encounter in our everyday lives.

Spite Your Face in many ways is equally as fantastical and golden as Treasures from the Wreck of the Unbelieveable but the difference is that it holds a very clear message or question about notions of truth, and the corrupt world we live in. This artwork points the finger directly at the selfishness and shallowness of modern society, and does so with comedy and clarity.

The Hirst exhibition may be the Goliath of the external Venice Biennale projects, in sheer number of works it certainly is that. However, it is not the David. Seeing so much opulence and fakery left me cold and tired. The craftsmanship is impressive for sure, but the underlying idea is weak. Who are these works for I wonder? The Treasures from the Wreck of the Unbelievable panders to a wealth hungry audience, quenching their thirst for imaginary mythical worlds and the authenticity of antiquity. In the second part of the show there are many doubles of pieces. Collectors can buy their Dead Woman with breasts exposed in black or white, and their Hydra and Kali in coral encrusted ‘discovered by diver’, or clean bronze. This glut of versions further exposes the factory line of production, no matter how ‘unbelievable’ these objects become they still acts as idols to wealth. The exhibition celebrates the hoarding of riches, the meaninglessness of truth, and does nothing to question what impact this has on the rest of the world.

It seems poetic that these two extremely different takes on the same subject should happen during the same year. The works which are made of pure gold, and are yet completely hollow of meaning, versa then the artwork which is covered in fake gold but harbours many a truth. It goes to show that so often with art it is a matter of perspective, and that we should remind ourselves of the fact that all that glitters is not gold.

Nicole Mollett‘s practice includes sculpture, drawing and performance. Her work often investigates hidden narratives and myth. Recent commissions include 'More Than 100 Stories' Creative People and Places commission, contributing to a publication for Penguin and a mobile artwork called the Kent Baton commissioned by Kent County Council.  Her work has been exhibited in Historic Royal Palaces, The National Trust, and the Jerwood Drawing Prize. Nicole completed her masters at The Slade, and has regularly lectured at various universities across the South East.