Review of The Future, at Coventry Biennial of Contemporary Art

“This is the nearest thing to time travel it is possible to experience. The alchemy of live music and ancient film creates a conduit, a wormhole, a charmed shortcut through the huge block of elapsed time in this moment. I feel like a guest in the Edenic corner of England depicted in these historic vignettes and conversely, the two dimensional dancers momentarily become guests in our own time.”

Not being a resident of Coventry, despite visiting the Belgrade Theatre a few weeks ago, I can say I hadn’t noticed the building which used to house the offices of the Coventry Evening Telegraph. Looking around at an area very much in a state of redevelopment, the building appeared in front of me, a throwback to 1950s minimalist architecture, which has been temporarily re-named as The CET Building, a pop-up arts gallery. This is where The Future was going to be held, a two week showcase of international and emerging art within its labyrinthine interior.

Walking into the building is indeed a step back into a past time, invigorating the senses with faded grandeur, gold coloured lifts, hard mosaic patterned stairs to make journeys on and musty smells all around. Gripping onto old varnished bannisters that millions of hands had touched in the past, I headed upstairs to the boardroom on the top floor, where the new installation by Georgiou & Tolley, ‘Magician Walks Into The Laboratory’ is resident.

The image of a girl on the right hand side of the room is facing what was the meeting table. Disembodied instructions are transmitted to the listener by the actor Professor Jack Klaff, on how to find the girl using remote viewing, maps, found objects (including ashtrays and Phillips cassette tapes) and previously classified CIA documents.

The tone of the installation is a testament to the alchemy at work in The Future, the found artefacts and the room itself giving the artwork a very strong and appropriate presence. After a few moments in the room, I explore the rest of the top floor under strip lighting and mottled carpets. There are sculptures under dim lights and a bathroom installation by the Turner Prize award winning Granby Workshop/Assemble.

More exhibits take me through what were formerly the offices, a trail of sculpture and installation nestling amongst accidental art of hanging wires and mottled paintwork of what formerly would have been the accounts, marketing and call centre offices. The trail led me down some steps and then up into a mezzanine, where I was met with a coffin, installed by the artist Duncan Whitley, draped with the flag of Coventry City Football Club. To the room beside me is a showing of his film 'Things Fall Apart', about the recent plight of the football club finding itself without a home.

After a brief trip outside, met with a gigantic wooden sculpture as part of Hipkiss & Graney’s 'Dead Shrines' project, I am able to explore the belly of the building, met with light installations bursting out from the darkness, ghost figures amongst pipework, cracked walls and blurred visions behind wired glass. 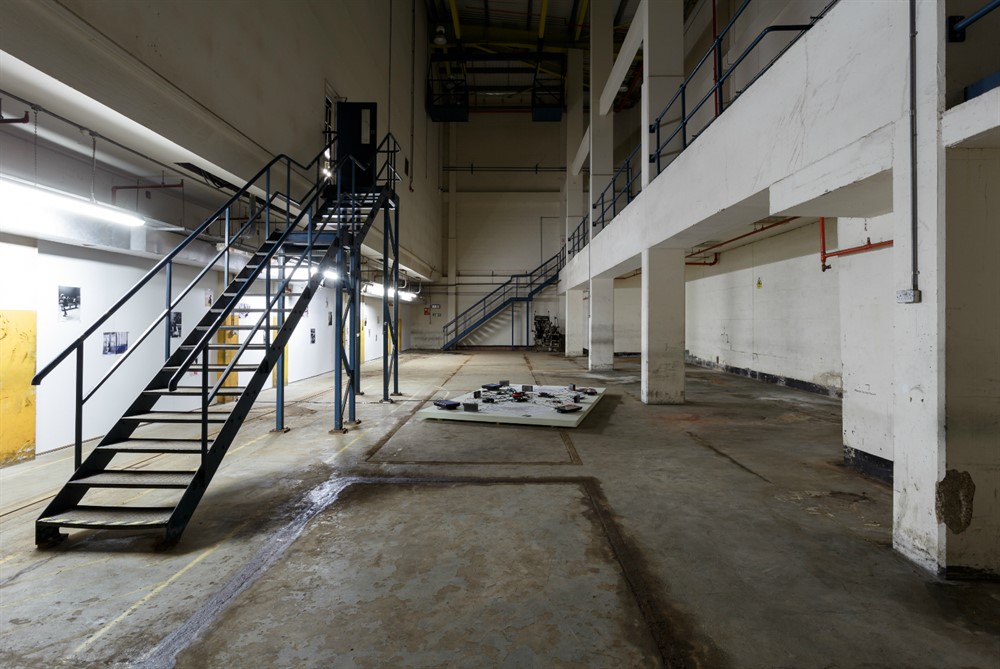 And then I found myself in a room where printing presses still stank of oil and fumes. Electronic whirrs emanated from an undisclosed installation, which drew me onto a balcony that I could go onto, overseeing a sound art installation by the composer Mira Calix.

Here, I went back on myself back to the reception, glad of the chance to a chance to enjoy this building in all its intrigue. I am glad to see that the developers of what will replace the CET Building are planning to be respectful to the architecture and interiors of the building. Yet, what was of special importance was the way that, for the present, visitors to The Future will be able to take the wormhole back into the past, with all its artefacts and talismans still in situe.

James Kennedy is a freelance writer with MA living in Birmingham. He is currently working on a long-term non-fiction project called 'The Wind' an account of Birmingham City Centre's regeneration and renewal. He likes to blog about the arts, is particularly interested in hauntology and psychogeography, and likes Nintendo, music and tea.