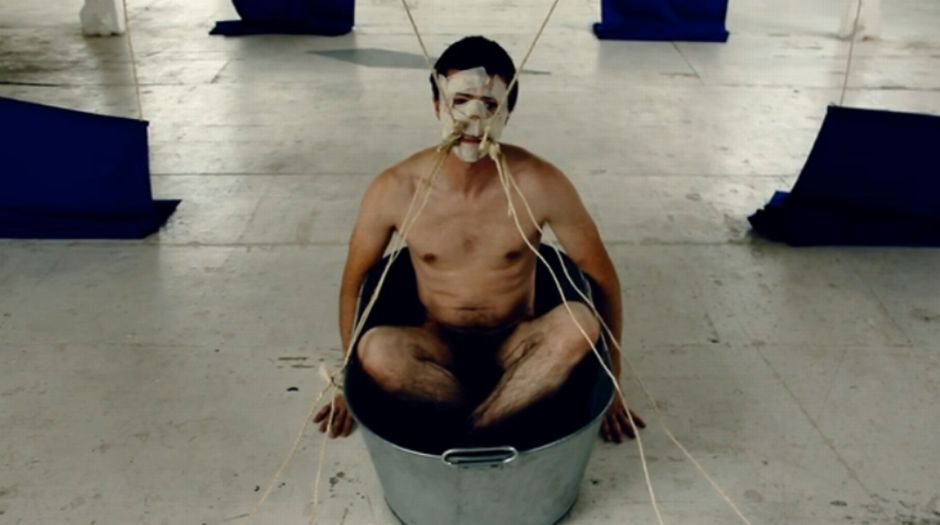 The sound of bees covers the noise of the spectators finding seats. On the conventionally set stage a small wooden desk and a chair sit in a white light. On the desk is a brown suitcase. A moment of stillness, then the lid of the suitcase opens and the performer climbs out from inside in a slapstick fashion. He is wearing a mid-length brown coat and his hands are painted yellow. After placing the chair in front of the desk, he extracts from the coat pocket a roll of masking tape and, sitting down, sets about covering his face methodically with pieces of tape, leaving only the eyes and mouth uncovered. Standing up, he blows in a white balloon, produces a large knife from his pocket and in a spectacular motion bursts the balloon, which instantly transforms into a full-size wine bottle. The wine is poured into an enamel dish in front of the chair and the performer sits again. He starts singing in a clear deep voice a traditional English song about a seamstress who, having suffered batterings from her drunken husband too often, finally resolves to stitch him in bed and beat him black and blue. The performance ends.

This twelve minutes performance piece by Tim Bromage was premièred in October 2011 as part of the Experimentica Festival in Chapter Arts Centre. Bromage graduated from the now closed Time Based Practice Department of Cardiff School of Art and Design in 2004, and ever since has developed an increasingly refined practice that combines folk traditions, stage magic and personal history. His performances are precisely constructed, often comprising self-made accessories designed within the tradition of illusionists' props. 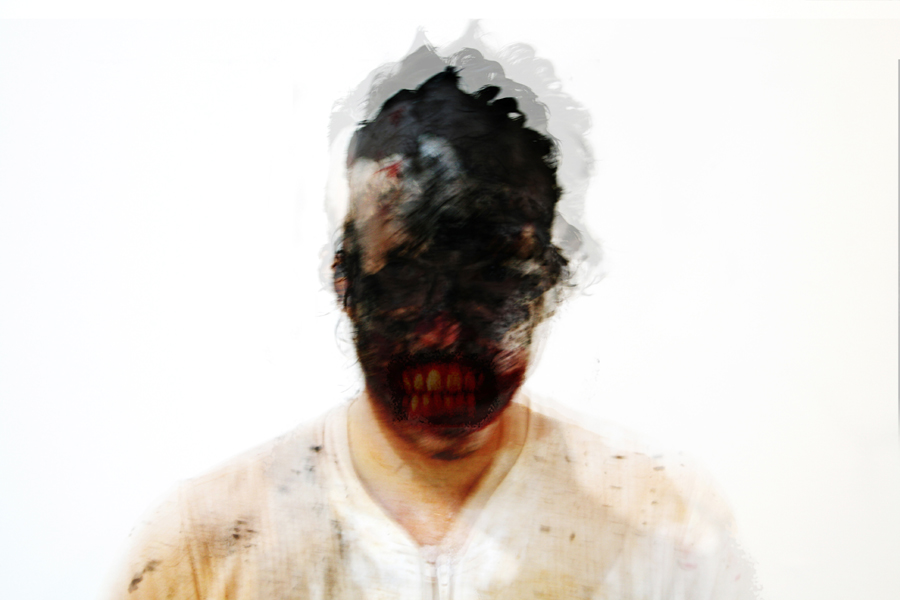 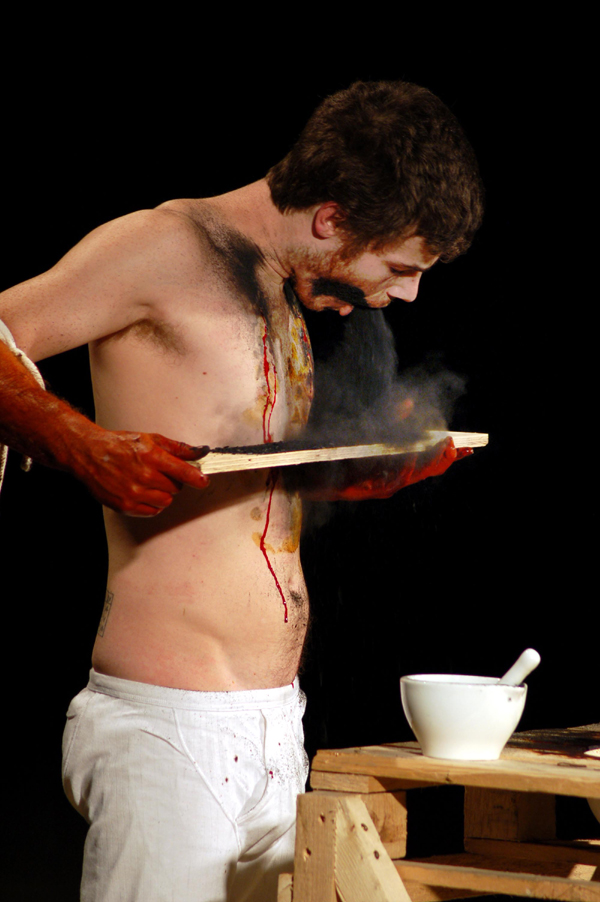 Some of the props are used so as to deliver live magic tricks, such as the balloon that turns into a wine bottle. Other props refer to the world of slapstick acts, for example a standalone door and frame holding a bucket that will predictably fall when the performer opens it. The inclusion of magic generates moments of wonder that work well on various audiences. For the spectator used to seeing all sorts of personal takes on performance art, the straight magic brings back a wow factor, a direct link to childhood experiences at the circus. For a less informed audience, the magic works as an icebreaker, for seeing the performer appear from within a suitcase prepares the mind to open to the actions that follow, which might be less comfortable or familiar.

Tim Bromage's physical engagement is a vital part of his performance work, be it through singing, mastery of magic tricks, strenuous activities, the use of unconventional make-up or of potentially dangerous props. 'Untitled' (2011) is another recent work, for video, that brings to mind Roman Signer's experiments with pyrotechnics and gravity as well as Wood and Harrison's performances in precisely prepared environments. Sitting in a steel tub, Bromage fits several strands of string in his mouth before slowly shuffling the tub backwards in a large open space. As he progresses towards the back of the space, the strings lift three consecutive sets of vertical blue flags, providing the seemingly futile, exhausting exercise with a constructed purpose and a rigorous visual dimension.

Over the years Bromage's performance being has evolved from a dark clown with a sinister, self-harming edge towards a more subtle combination of artist-illusionist, thus preparing the ground for an original delivery of tales and actions that belong both to the solidly grounded traditions of popular shows and to a generous, resolutely contemporary practice of performance art.

Tim Bromage moved to Wales in 2001 to study Fine Art at the University of Wales Institute, Cardiff. He specialised in time-based practice, graduating in 2004. Since this time he has continued to live and work in Wales, exhibiting and performing at an international level. He has worked as a curator, producing and organising performance events throughout England and Wales. His performance uses costume, magic, and song, employed as a mode of symbolic demonstration that references the conflicts present within the human condition.

Born in Lyon, France, Granjon studied BA Fine-Art in Marseille, France and in 1990 became a freelance video and audio technician. He directed several short films between 1990 and 1999. In 1995 he moved to UK where his focus gradually shifted to performance and robotics. He still teaches on the BA Fine Art in Cardiff School of Art and Design, Cardiff.

Since 1999 he has developed and showed internationally a series of live performances with lo-tech robots and songs. Installations from his first UK solo show Z Lab 2001 were sold to the Arts Council of England and to the Museum of Modern Art of Luxemburg.

Since then, Granjon has developed a steady flow of machines for performances and exhibitions, as well as workshops, collaborations and other projects. He was awarded a Nesta Fellowship in 2004 and was one of the artists representing Wales in the Venice Biennale 2005, where he exhibited a Robotarium.