Home Archive Open Frequency 2012: They Are Here, selected by...

Open Frequency 2012: They Are Here, selected by Deborah Kermode 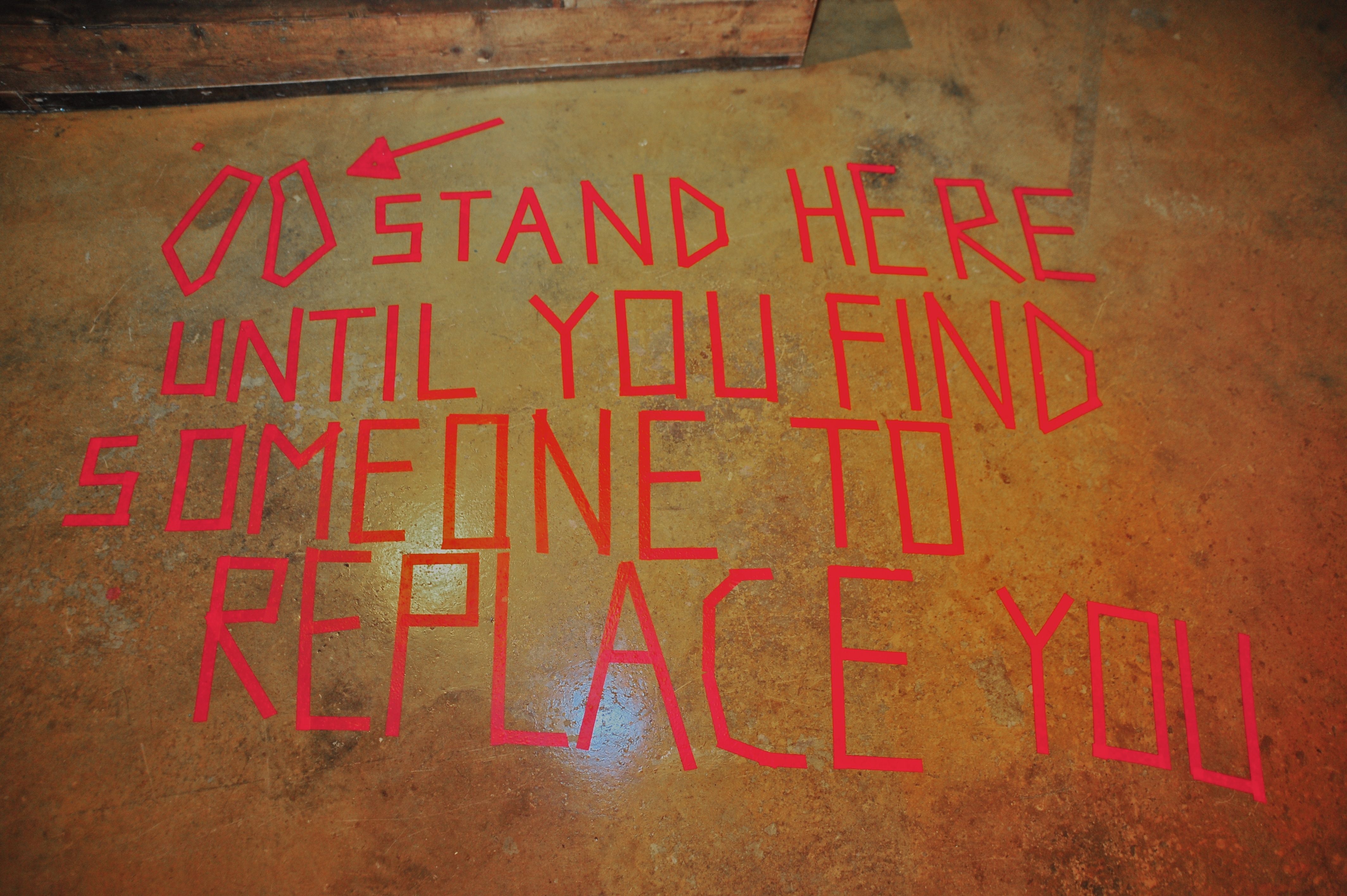 They Are Here, Stand Here Until You Find Someone To Replace You, 2009, dimensions variable, tape. Credit: The Basement, Brighton

Deborah Kermode, Deputy Director of Ikon Gallery, profiles the work of London and Birmingham-based collective, They Are Here.

Often artists pose questions that shape the outcome of their art and it is through this dialogue that communal action can arise. This is the territory explored by They Are Here, self-proclaimed ‘gatherers, editors, assemblers and facilitators’ whose practice stretches across media and sites from theatres and galleries to online and civic spaces, employing a clever use of populist structures such as Myspace or film promo parties, as a way to ask questions about important social concerns.

Together since 2006, They Are Here is a collective led by Helen Walker and Harun Morrison. Each project has its own unique collaborative framework that emerges through the contributions of various guests, often people with no connection to contemporary art. Sometimes these contributions assist in the development of a work or its delivery, but in all cases the primary impulse is to find new collaborative models. 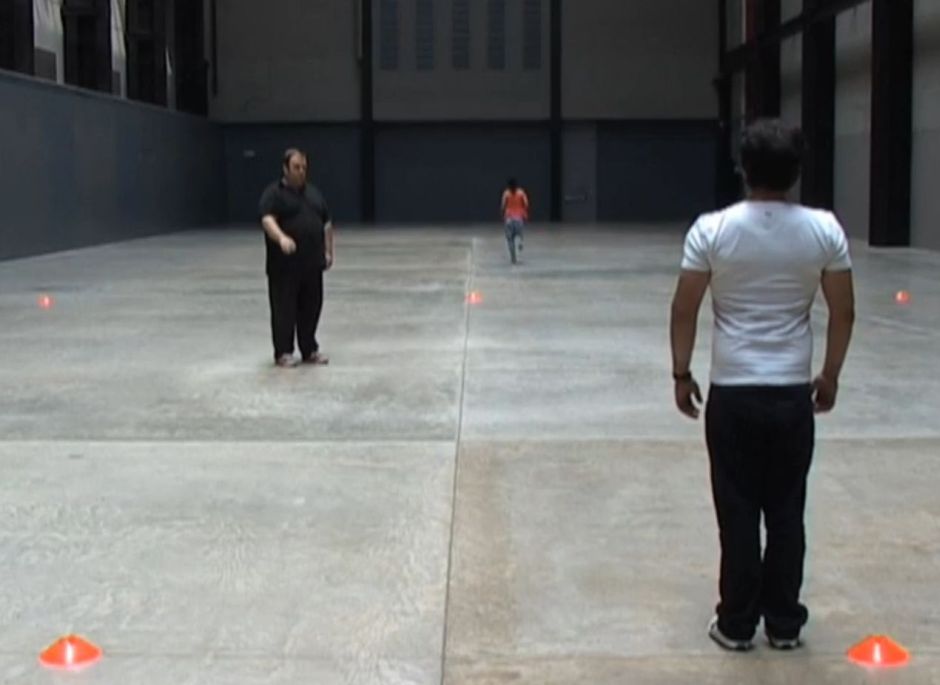 Unravelling the complexities of history and myth-making is a recurring interest in their work. A recent project, Trailing Henry, 2011, saw the collective conceal five hundred golden tickets in various books in Brixton Tate Library, books that specifically referenced themes such as sugar, Victoriana, labour and Black history. With a nod to a Willy Wonka-styled campaign, posters encouraged visitors to find the tickets, with the first twelve becoming part of a privileged party: their reward a three-day outing to explore the philanthropic legacy of Sir Henry Tate. In this commission by Tate Modern, the artists proposed to explore the politics of philanthropy specifically through the legacy of Henry Tate himself, a well-timed intervention in the present age of austerity.

Each collaborator’s brief, albeit a fairly open-ended one, was to explore the notion of historical philanthropy and to examine their own social responsibility towards gifting and individual giving. Although they had in common a knowledge of Brixton and a shared enjoyment of reading, the assembled strangers knew nothing of each other beforehand, nor were they given a conclusive endpoint.

Passing through some of Tate’s various historical landmarks, their shared line of enquiry led them to burrow into the often complex arrangements of assets generated by the Henry Tate & Sons sugar refineries, to the Tate Libraries and Tate Gallery we know today. This collaborative focus led them to a deeper understanding of one man’s profound legacy and, through this convivial group dynamic, a more active way of experiencing history that was also communal and at times performative.

But how might the patrons of Brixton Tate Library collectively make an impact similar to Sir Henry Tate's within their own cultural landscape in South London? This underlying question continues to be shaped by the artists and their collaborators, as the project unfolds at its own pace and we watch how their actions create a tailored philanthropic model for their local library. 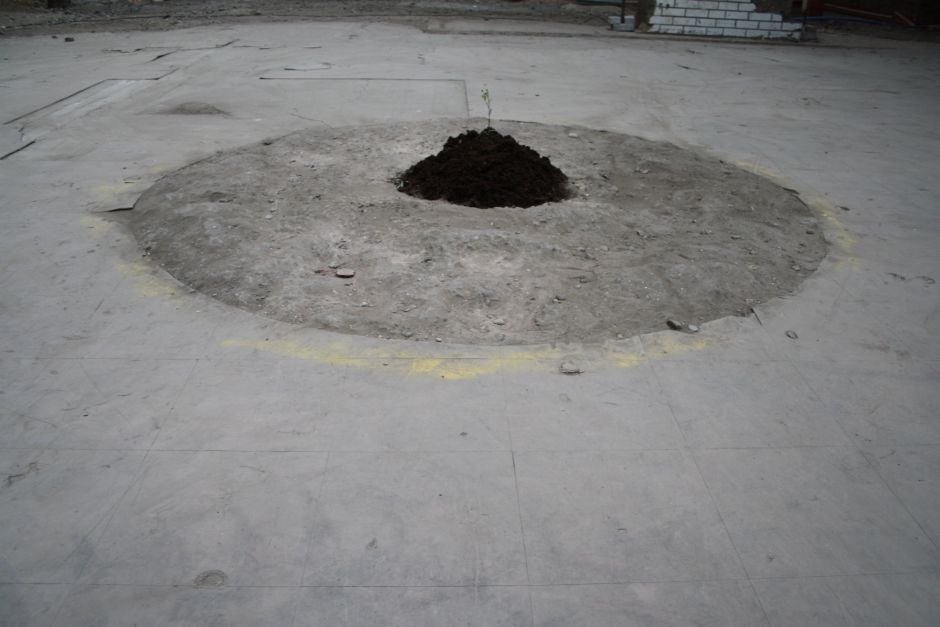 Some forms of interactivity are obviously good for art, as they are good for society, and many artists believe that the more democratically ideas and information are shared, the more accessible art will be. This is an important aspect of the collective’s work: they approach each new relationship with a commitment to ongoing exploration, despite the often unavoidable timeframe imposed by cultural institutions. They Are Here projects derive their legitimacy from the fact that they adapt to interrogate their own enquiry and develop a genuinely mutual respect between their collaborators.

Their projects can also be a great deal more discreet than the one described above. In a small, velvet-lined box rests a silver-plated spider web that references a mythical object believed to have been owned by Queen Victoria’s husband, Prince Albert. 'Prince Albert’s Web', 2011, is an exquisite work of art, recently included in the collective’s curated exhibition, Their Wonderland.

Here the collaboration was between the artists and the registrar from the Royal Palace, documented in detail through a series of letters that attempt to question the authenticity and provenance of the original object, if indeed it ever existed. One way to approach the difference between museum art and myth is through the interrogation of the object. The human capacity for revelation is manifested through this project, in which we are led away from the object into the lives of real people, seeking narratives that connect different professional communities, in this instance historians and archivists.

They Are Here use their art to create an arena for action in which the meaning and nature of things are constantly reviewed. Their work does not aim to judge, classify or improve anything in their collaborators' lives. The meetings and interactions they arrange are poetical practices which bring together ethics and aesthetics. They are processes that could almost be regarded as performances in which a group of people meets and gets closer, and the outcomes of these meetings are recorded in a poetic form, such as performance, object and documentation, as a means of prolonging the dialogue and keeping us all asking more questions.

They Are Here is a collective practice steered by Helen Walker and Harun Morrison since 2006. They Are Here are based in London and Birmingham.

Since 2011 Debbie Kermode has been the Deputy Director of Ikon Gallery, previously she was director of Bright Space, an arts education charity that delivered the Creative Partnerships programme for Birmingham. After completing an MA in Museum Studies at Leicester University Debbie became curator at Ikon Gallery where she developed the internationally acclaimed Off-Site programme.  More recently Debbie worked as Producer for Fierce! Festival promoting ground breaking live art across the West Midlands by inserting it in to innovative public situations. She continued to pursue this practice of participatory work with Birmingham Opera Company, RSC and Capsule bringing programmes as diverse as opera, live art and heavy metal music to younger audiences. She is also a trustee of Pentabus Theatre Company and Fierce Festival.