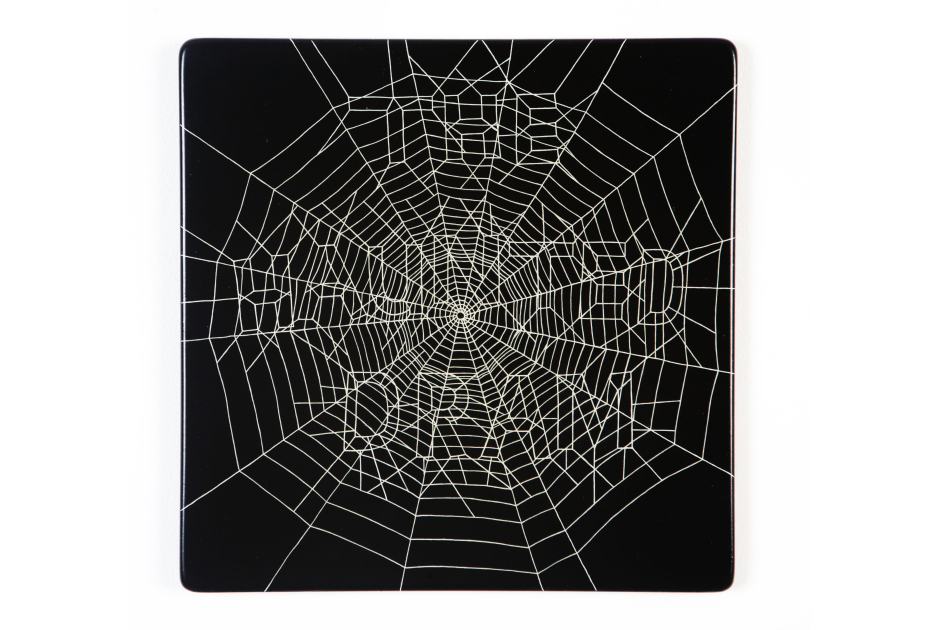 The Lonely Piper was genesised in 1999 as the sole protagonist in the film 'I Can't Play The Bagpipes', a romantic yet humorous deconstruction of Scottish stereotype. His body of work to date has a Caledonian twist yet stems from the universal concerns of natural history, life, death, the paranormal and a love of folklore. Modestly referring to his output as 'not the most prolific', part of the enjoyment is that each piece has been re-worked and built up over time, slowly creating a mythology that is tangentially unique to the Piper. Drawn towards a visual form of storytelling, he treats folklore as a contemporary rather than antiquated concern.

In an ongoing painted series of spider's webs, the 'silk' from his spinneret weaves a sentence and a story into each web, entrapping a voice from the natural or spirit world. In 'The Water of Life, a Spirit Not To Be Exorcised' (2006), the bon-motif of the web reads 'The Haunted Dram', which alludes to the following piece of Piper paranormal folklore. “The Haunted Dram' refers to a memory system in which everything remembers, not just humans. A murder from the 1700s remains unsolved. Stabbed over a petty financial or political squabble, 'he that shall remain nameless' was buried in unconsecrated bogland. Through centuries the land changes. Drained to become farmland, it now grows barley to supply the local whisky distillery. The distillation process accentuates a paranormal window for these barley heads that have sucked up the victim's horrific last moments. The mind of any drinker tasting this particular dram becomes a conduit for the re-animation of this dying man.'

For The Lonely Piper, the memory system of his own work alternates between the story he carries with him, the actual artwork and its title. In another web, 'Every Moment's a Masterpiece' (2005), the woven inscription 'The Rugged Grandeur Gallery' resonates as a crystal phrase but also more so when one learns from the Piper that, 'This gallery exists out-with architectural confines. It is a geographically and geologically defined gallery of unpainted landscapes. The Highlands of Scotland are distilled into a gallery that the Lonely Piper represents, rather than the other way around.'

The Lonely Piper also makes collages that unite the natural world with the transcendental. 'Frozen Waterfall Traversed' (2006) depicts a group of salmon going one step further than the river's source, encapsulating them mid-leap on a mountain summit. 'The Cosmic Monarch' (2006) is a photomontage representing a 'Pagan Rudolph' against the backdrop of The Horsehead Nebula. His nose is a red Fly Agaric mushroom. This multi-layered approach to meaning is also apparent in The Lonely Piper's sculptural work 'The Cancerian' (2007). The shed antler of a red deer has very subtly had its top fork shaped and painted to represent a crab's claw.

It is no surprise that in noting the eloquence of words in his artwork, The Lonely Piper is also a gifted writer, with a unique style drawn to both archaic and contemporary language. His swiftness of mind and unerring love of puns has clocked up many memorable phrases. In his 2007 essay for the Crafts Council of England, a group of potters are referred to as 'serial kilners'.

Recent published writings include: The Hydro-Electric Ladyland for The Nemeton Tour (2008), a series of collaborative journeys with both visual and written outcomes for an eventual publication as part of the Nemeton project developed by Dr Norman Shaw; From a Macclesfield of Dreams (2006) commissioned exhibition text for David Shrigley's solo show at DCA, Dundee; The Sandblasted Pillars of a Sandstone Community (2006) essay for The Young Athenians exhibition catalogue, edited by Neil Mulholland; 'Bird of the Devil' (2006) A Strict Nature Reserve Book by Edward Summerton and published by ET4U Denmark; 'Bird of the Devil' (2006), feature Article for MAP Magazine, Issue 7; Hunter's Expedition of Discovery (beyond the final parallel) @ Generator Projects, Dundee (2002), review, Flash Art International.

The Lonely Piper lives and works in Dundee.