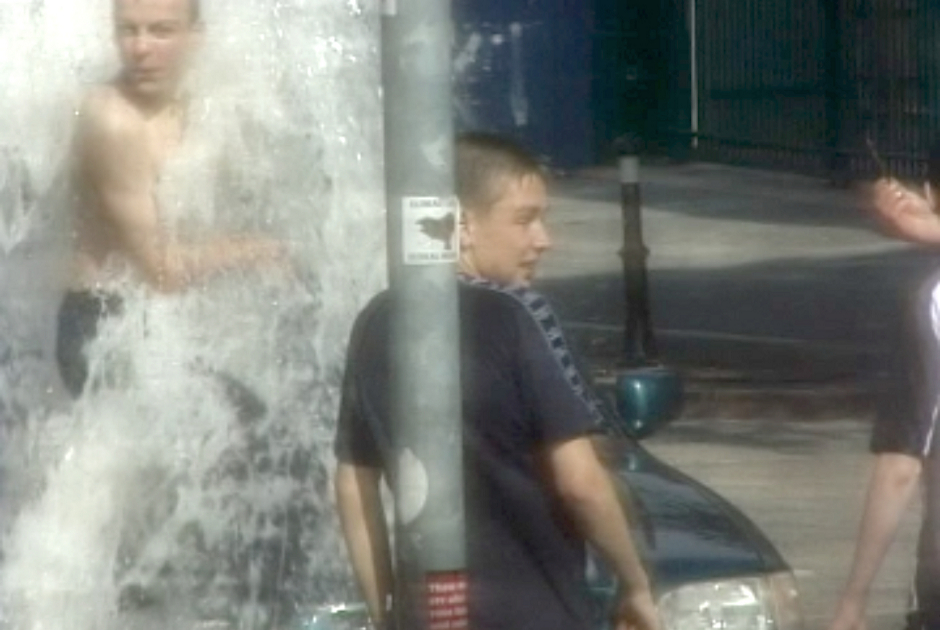 We asked lecturer and writer Declan Long to select a Northern Irish artist for Open Frequency. Here he profiles the film work of Seamus Harahan.

Seamus Harahan: Of Time and the City

The first work I ever saw by the Northern Irish artist Seamus Harahan was 'Holylands' (2003), a thirty-minute video montage composed of discreetly snatched moments from the everyday life of a South Belfast street. Shot through the artist’s front window over the course of a year, 'Holylands' has a fidgety, hand-held informality that is disarming in its seeming simplicity. So simple, maybe, that I was at first a little slow to see the full skill and scope of Harahan’s art.

Gradually, though, my eyes were opened to the way Harahan himself maintains an assiduous openness to the world. He makes films that are deliberately unforced in style, unassuming in attitude and ‘absent-minded’ in their apprehension of day-to-day reality. He pictures urban landscapes with a canny kind of casualness, offering many diverse instances of what he has termed “the dislocation of the familiar”.

In 'Holylands', as with many of Harahan’s films since, we see life on a city street just as it is, in all its acute, unspectacular specificity. 'Holylands' is a film of ardent ordinariness and absolute locatedness. And yet there is little that identifies or defines this place in any straightforward way. This is Belfast — but with few obvious markers of place, with hardly any of the expected geographical ‘certainties’ associated with this city. Instead, Harahan cultivates — and celebrates — a heightened spirit of unpredictability about place. He maintains a commitment to all that is real and recognisable, but also transient and minor. 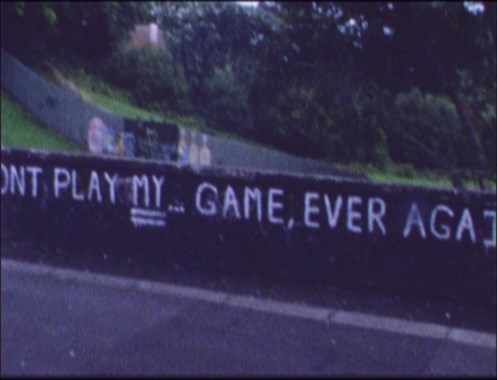 Seamus Harahan, still from 'Before Sunrise', 2008

It’s an artistic impulse that perhaps echoes the German writer Robert Walser’s belief that “we don’t need to see anything out of the ordinary. We already see so much”. Indeed, as Susan Sontag has written of Walser, Harahan’s art similarly advances “the claims of the anti-heroic, the limited, the humble, the small”. One result of such a modest, understated vision, Sontag says, is that “the important is redeemed as a species of the unimportant”. Where we do gain corner-of-the-eye glimpses of Belfast’s damagingly ‘important’ territorial delineations — as in the film 'Before Sunrise', which charts a stroll through a public park divided by a ‘peace-line’ fence — the distracted drifting of the camera renders the authority and significance of such structures surprisingly negligible.

Attentiveness to anti-heroic subjects, to marginal or ephemeral features of city experience, emerges in Harahan’s films out of a curious combination of artistic patience and restlessness. Harahan’s gaze can often linger for surprising length on what might appear to be next to nothing. The insistently ‘slight’ recent film 'Ubaldo Continiello' (yet to be shown) concentrates only on the movement of raindrops as they run along a series of outdoor cables. Soundtracked with the steady groove and melodic glide of a piece of 1970s Italian movie music, this patiently observed minor phenomenon takes on a peculiar, sensual elegance. 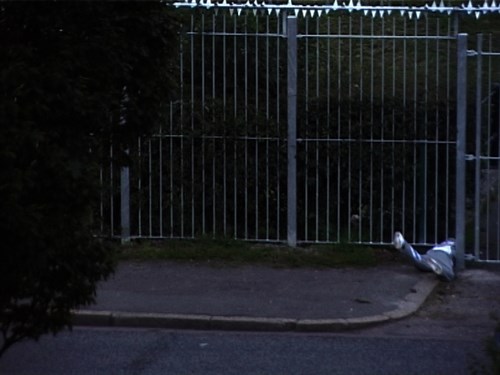 Elsewhere, music is crucial to the way in which Harahan’s innate artistic restlessness is registered. In the longer urban montage films such as 'Holylands' or the ongoing and evolving work 'Cold Open' (shown during March alongside 'Before Sunrise' at Kerlin Gallery, Dublin), each edited slice of street-life is accompanied by a different piece of appropriated music, all in wildly divergent styles. We rapidly jump from one musical mood to another as jolting shifts are made from one unrelated scene to another. In one sequence (of one version) of 'Cold Open', we are allowed a curtain-twitching, neighbourhood-watcher’s view of an unremarkable local event: someone moving a badly parked car late at night. There’s no especially compelling ‘action’ here; but backed by grinding, clattering drum ’n’ bass, the focus of this amateur ‘surveillance’ accumulates sinister connotations. The abrupt cut that soon follows entails a radical change of atmosphere, introducing — to the sound of a traditional Irish reel — a gang of track-suited kids throwing play punches. Their routine roughhousing is lent a kind of tenderness by the music’s effortless lilt, creating a tone wholly at odds with the enforced intensity of the previous episode. And so it goes in 'Cold Open': each idiosyncratically sound-tracked scene giving temporary access to co-existing, but often wildly contrasting, everyday micro-worlds.

At certain moments watching Harahan’s films, whether stilled by their simplicity or swayed by their unpredictable rhythms, I’m reminded of similarly emotive combinations of sound and vision in the films of Terence Davies. Davies’s art is of course considerably more cinematic. But as David Thomson has written, in Davies’s films, “nothing happens, yet lives and a time have been opened up”. Thomson describes one film by Davies as “a poem to ordinary bliss …in which sometimes nothing more momentous happens than a change in the light”. As with Harahan, however, we know that under the right artistic circumstances, such small, fleeting alterations in reality can indeed feel truly momentous.

Seamus Harahan's video, installation, film and sound based practice engages directly with place. His starting point is not the making of the work; instead his strategy is to forget and just film the social and cultural environment around him.

In November 2013- March 2014 his work was featured in Assembly, A survey of Recent Artists' Flms and Video in Britain 2008 - 13 at Tate Britain, London. 'Cold Open' received the Jury Award at Ann Arbor Film Festival, Michigan in March 2014. He represented Northern Ireland in the 51st Venice Biennale in 2005 and received a Paul Hamlyn Award for Artists in 2009.

August 2014,' Holylands' will be on display in a solo exhibition in Outpost, Norwich

Seamus Harahan lives and works in Belfast and is represented by Third Space Gallery, Belfast and Gimpel Fils, London

Programme Director (with Francis Halsall) of the MA Art in the Contemporary World at the National College of Art & Design, Dublin. Declan is also a regular contributor to Artforum International and Source Photographic Review.

Meanwhile in Belfast by Declan Long >