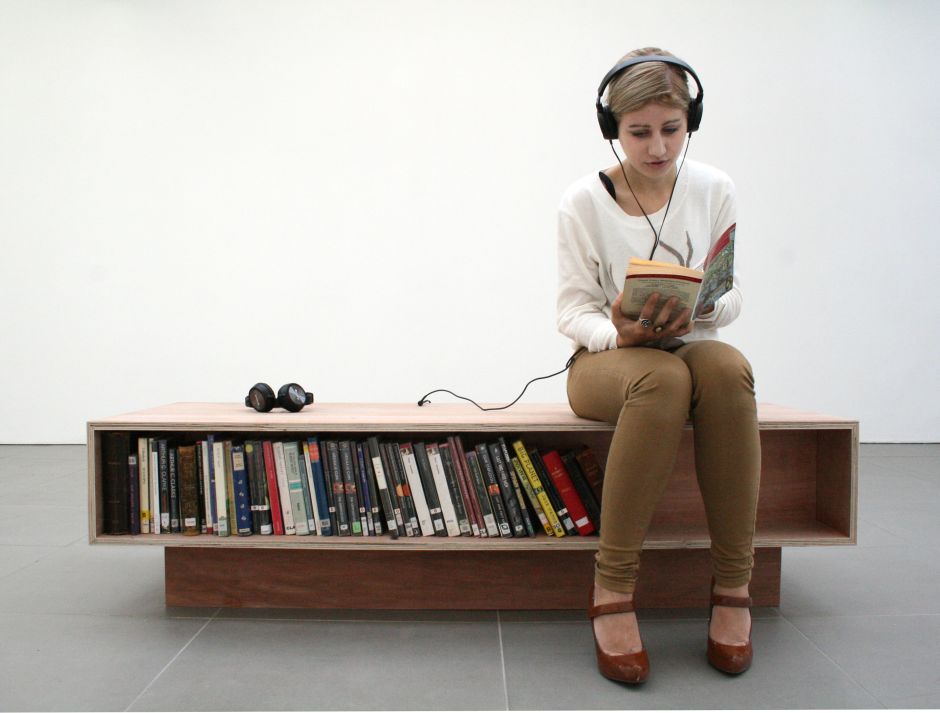 Her contexts draw from the history of social structures and the way in which knowledge has traditionally been used as an instrument of social control. Her interest in the hierarchies revealed through the availability of knowledge to a public interestingly connects to the role of the archive as preserving not just bodies of knowledge, but also these hierarchies themselves.

'All the Libraries in London' (2011), shown in December 2011 at Cell Project Space in East London, is a text work presenting a comprehensive list of all the publicly accessible libraries in London. Categorised alphabetically and typographically by sector, the wall-based work contains public and private libraries owned by local authorities, universities, professional bodies, charities, government agencies, NHS services, embassies, places of worship and independent cultural organisations. The complexity of access (and restriction) to many of the archives through membership and socio-political standing continues to contribute to the history of the knowledge’s significance within society. 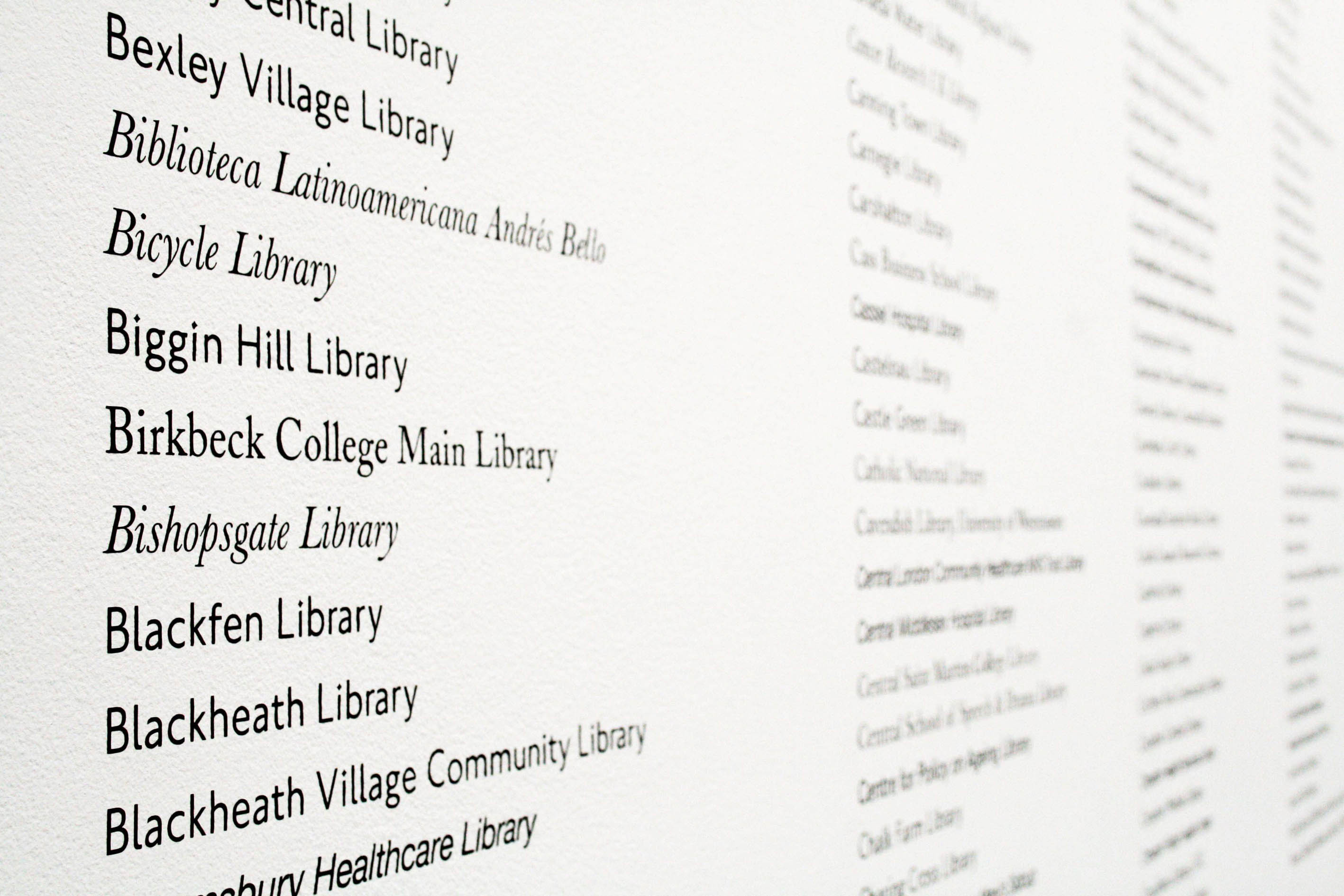 Ruth Beale, All the Libraries in London, 2011 (wall detail) 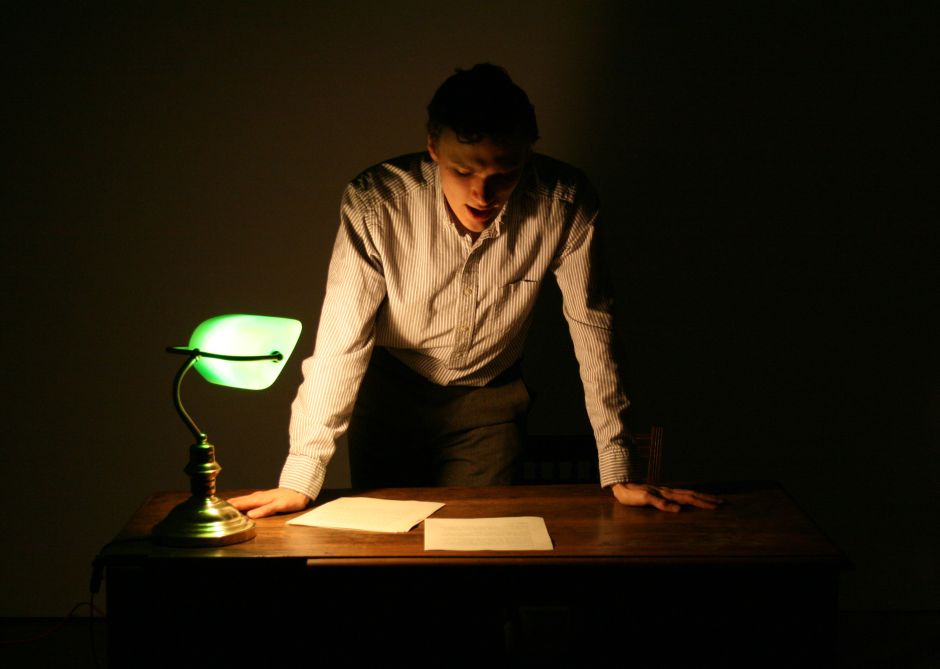 The work brings to mind Alberto Manguel’s book The Library at Night, which amongst its sensory and evocative descriptions of leather book jackets and Dewey classification systems, proposes the library as a repository of memory, upholding the Renaissance dream of the universal library of infinite knowledge. Another work 'Now from Now' (2012), set in relation to 'All the Libraries in London', is a narrative sound-piece documenting a journey through a fictional London, where all the libraries are closed but intact. Beale presents this work with a shelf-full of loaned Utopian novels for the audience to dip into and pull out sublime and abstracted moments.

As part of the 'Public Knowledge' series commissioned by Cubitt, Beale hosted an informal evening film salon consisting of clips and excerpts exploring the varying representations of the library in film. The salon culminated in a screening of Alain Resnais' 1956 film Toute la Mémoire du Monde (All the Memory of the World), a documentary that characterises the printed contents of the Bibliothèque Nationale de France as ‘prisoners’. Resnais refers to the books as being ‘imprisoned’, and library patrons, in taking the books out, both liberate the books and themselves.

Another ongoing performative work, 'Miss B's Salons', are based on the historical understanding of the Salon as a place for ideas and exchange. Traditionally facilitated by women or Salonnières, these regular discussion events bring together artists, curators and other specialists to present and discuss their work and selected topics. The salons explore varied thematics from direct discussions on topics such as ‘Agency’, ‘Monumentalism and Performativity’, to more specific debates such as ‘Can artists deny their political references?’. With Beale as the Salonnière, the events continue to contribute knowledge to the public sphere and also reflect on current critical art practice and thought.

Through these works and her wider body of practice, Beale insightfully explores our cultural history and our tacit understanding of knowledge. In making transparent the nuances of society’s relationship with culture Beale offers us a library card of our own, to not just explore the contents of the books but the spaces in between them.

Ruth Beale is based in London and completed an MFA at Goldsmiths in 2010. She completed her BA at Edinburgh College of Art, after which she started a peripatetic events and exhibitions project in Edinburgh called Aurora. Since moving to London she has been hosting 'Miss B's Salons', themed discussion events at private and public venues. She writes, and makes drawings, prints, audio works, performances and tailored furniture for installations. Projects often involve collaborators and participants.

Current and recent projects include a collaboration with Amy Feneck at the Working Class Movement Library; Cultural Pursuits, a festival of local amateurs convened in a school gallery; The Pamphlet Library, an ongoing collection of political pamphlets; Public Knowledge, a series of events which explored relationships between the social purpose and cultural significance of the library and archive; and Art for Virtue's Sake, a lecture about the relationship between education and 'culture as a social project'.

Karen Gaskill was born in Manchester and currently lives and works in London. Karen is an independent curator and researcher, and works across the fields of contemporary art and media practice.

Karen is Exhibitions Project Manager at Crafts Council until April 2013, and Guest Curator at Somerset Artworks managing three new commissions for the region. Recent exhibitions include Constellations at Cornerhouse Gallery, Manchester, 2011, co-curated with Michelle Kasprzak. She was Art Program Manager for FutureEverything in 2010 and Art Award Manager for 2010 and 2011.

She was the founder, co-director and curator of Interval from 2005-2009, an arts organisation based in Manchester, which provided a critical forum and exhibition platform for emergent to mid career artists.

Karen is a Senior Lecturer and Researcher in Photography and Curatorial Studies at Sheffield Hallam University. She is currently external examiner at Liverpool John Moores University for the Digital Media Design Course International Programme, 2012-2014. Previously she held an academic post at the University of Huddersfield as a Lecturer in Fine Art Media, and has been a guest and associate lecturer at various institutions across the UK.

She has a PhD in Social Curation and Contemporary Practice, an MA Research in Fine Art and a BA (Hons) in Fine Art Textiles.

Open Frequency keeps you in touch with new developments in contemporary art practice from across the UK. The artists are selected and profiled by leading curators, artists and writers, presenting the work of significant emergent artists.