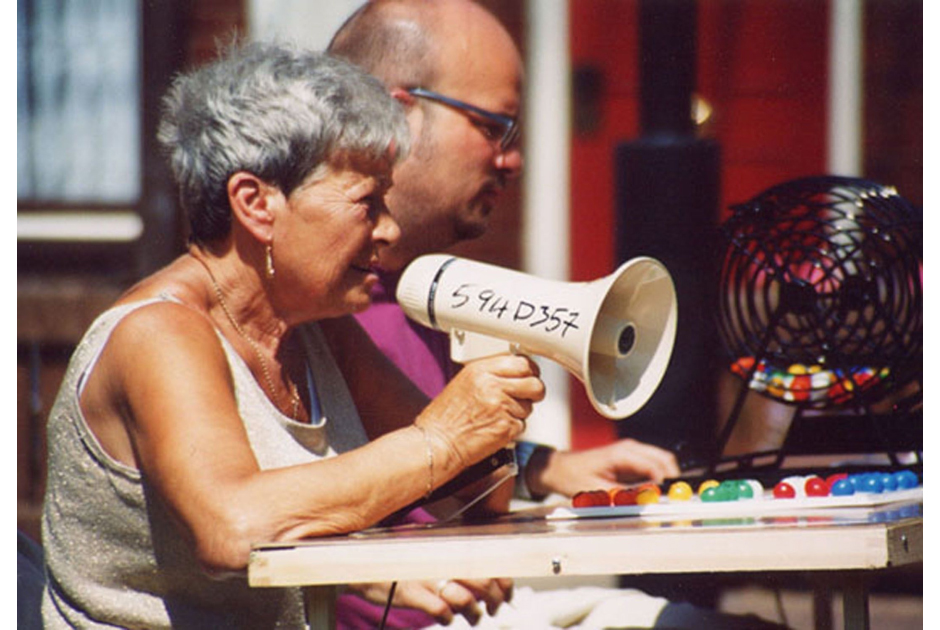 For the past 12 years Michael Needham has lived on St. Peter's Estate in Bethnal Green (London, UK). Since 2003 he has commissioned artists to work with residents of the estate to produce events and artworks for 'Neighbourhood Watching'. Adelaide Bannerman interviewed the artist about this ongoing project.

AB: Earlier on today with you, I began with my thoughts about artists' interactions with the cultural and built environments of housing estates, citing artists such as Stephen Willats and Renee Green. Superflex now comes to mind, Marcus Coates and even recent Artangel projects by Roger Hiorns and Catherine Yass. In light of those initiatives your project 'Neighbourhood Watching' has established a different engagement in that its activities are prompted intermittently by observations that you make as an artist and long-term resident of St Peters Estate. Earlier on today, you mentioned your feelings of mixed obligations as an artist using his environment as the starting point to make work from, and then as a responsible tenant and neighbour, involving himself in facilitating initiatives that intervene and make some form of difference to the wider community.

Could you perhaps elaborate on those senses of 'obligation', and then go on to talk about your recent experience in Amsterdam, and how it's informed your thoughts around how 'Neighbourhood Watching' has progressed over the years?

MN: Obligation… whilst it used to be a word or notion arrived at towards the end of discussions, I understand its significance and treat it as a priority from the outset of the a project, and recognise the conscious and subconscious manner in how it informs my practice. The precedent of what I do and what the organization achieves only sets its obligation to the estate and the residents. Expectations have been set high; I am a professional and deliver high calibre projects.

A committee of four residents and two invited members governs 'Neighbourhood Watching', and whilst it adheres to the conformities of managing an organisation … for me in the first instance it is a creative project, and in order for it to progress in an innovative manner it has to be a 'project'. This allows for freedom and fluidity to experiment … not having to answer to a council or social agendas. The project evolves at a pace that I set. 'Neighbourhood Watching' has played a significant part of my life for the past seven years; as an artist it challenges me. I am the public face of the project and the primary communicator.

AB: Could you perhaps talk about your Dutch counterparts and their location, the project you embarked upon and how it developed?

MN: 'Op zoek naar het Noordgevoel' is a project based in Amsterdam North, and is providing a platform for residents to interact with each other and their surroundings. Amsterdam North is the working class area that straddles the land to the rear of Centraal Station, and is now experiencing some regeneration in parts. The aims of the project were to identify the characteristics of this particular part of Amsterdam and in doing so define the 'Northern Feeling'. I was invited to take part in an artists' residency and was living for one week in a house in one of the poorer neighbourhoods, with the aim of defining my 'Northern Feeling'.

The area was very similar to Bethnal Green, my own neighbourhood, and I spent the first few days cycling and talking with local people, beginning to make connections. I suppose that this time working to a certain time-frame and knowing that you have to make a piece of work, spurs you onto make decisions and act quickly. I found myself identifying the flag on top of the Shell Building as the emblem of 'feeling' … a proud feeling, which led to wanting to create a flag for the people of the North.

Choosing clothes I had found in a bag on the pavement with shirts, scarves and dresses, I found a sewing materials shop, and was led to a local community centre where an elderly group were willing to help. A natural train of events occurred.

AB: If I understood you correctly 'Op Zoek Naar het Noordgevoel' has a dedicated gallery space in one of the houses? In contrast 'Neighbourhood Watching' projects are focused outwardly into the environment- where you've commissioned interactive events that provide a meeting point for residents to get together. You're off to Tokyo soon, what have you heard is going on there, and are there similar artist-led projects happening there too?

MN: Yes that's right, the project in Amsterdam has been ongoing for about 18 months and the residency aspect has happened more recently. With regards to my project, I had felt beforehand it would be an opportunity to digress from my usual participatory led practice, but I quickly immersed myself into my traits of communicating with the locals and steering a project from these encounters. I don't often show work in gallery spaces, and so the flag is a departure from the usual outdoor activities and events-style work. As for the commissioned events with 'Neighbourhood Watching' and some of my past outdoor projects, I do enjoy the self-promotion that's achieved on the day through actually doing the activity. That unknown quantity of who happens to pass by usually welcomes people into the event and conversations develop … a meeting point is a good choice of words. I've been facilitating an art group at Age Concern on a regular Monday afternoon for the past four years, and whilst I've initiated some great pieces of work from those involved, at the end of the day it is a meeting point for creativity.

For my research trip to Japan I am there to deliver a series of presentations to students in Housing Policy at Chukyo Unversity in Nagoya, and at CNAI a community organisations hub in Tokyo … a lot is happening in Japan so actually being there will help me to understand the opportunities for my work. For Australia, I've been invited to deliver a small project by Melbourne City Council in the Carlton district, which I'm really looking forward to. The neighbourhood already has an established artist-in-residence scheme with previous projects by Lucy Orta and Angela Bailey.

Michael Needham was born in Derbyshire in 1965. He completed a BA Hons. Fine Art at the University of the West of England (Bristol) in 1995, then went on to complete an MA in Audio & Visual Production at London Guildhall University in 2002. He inititiated 'Neighbourhood Watching' the following year, facilitating a relationship between artists and residents on the housing estate where he lives.

In addition to the many works and events Needham has helped create for 'Neighbourhood Watching', he has successfully delivered several other commissions independently for a variety of clients, including: Inventory of Aliases- Wouldn't It Be Nice at Somerset House, for Abake (2008); Space/ Bow Older Peoples' Project- 21 Stories, for The Old Ford Housing Association (2007); Growing up in Tower Hamlets, for the East London Business Alliance (2007); Banking on Shadwell for Deutsche Bank (2006); Phone a Friend/ Intergenerational Project for Magic Me & Age Concern- Tower Hamlets (2006).