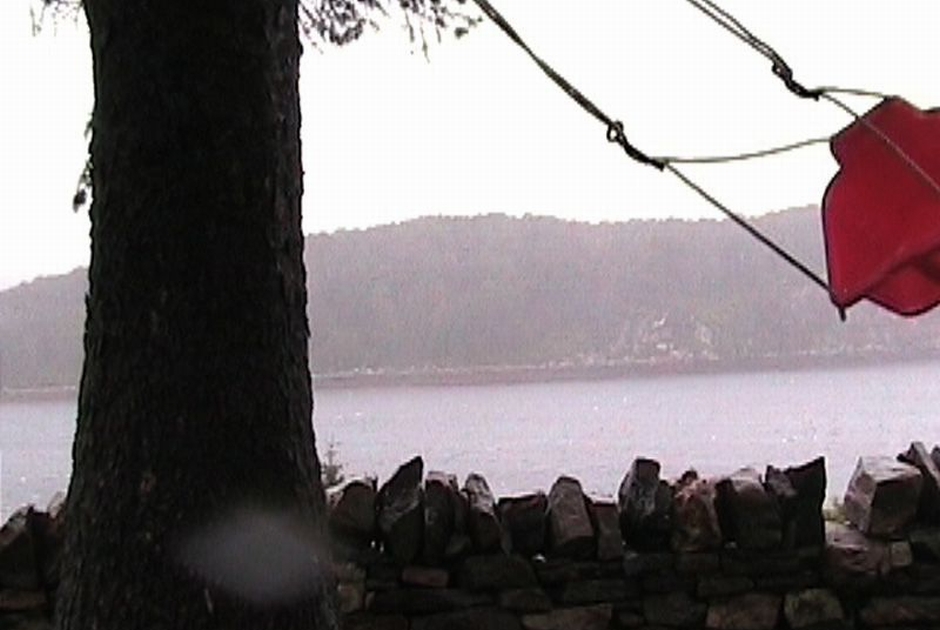 Lisa O'Brien's performance and installation work stems from her interest in sound. In the 1980s she studied Expressive Arts at Brighton Polytechnic which included components in music composition, performance and sculpture. She developed an interest in working with instruments and vocals and much of her subsequent composition and performance investigates the potential of music and language to interpret an event, place or experience.

O'Brien acknowledges that the time and space based elements of sound are co-dependent and approaches the audio and visual with equal importance. Generally working with video, performance and installation, O'Brien intentionally disrupts the natural link between sound and vision. In her Artist's Statement she states 'It is the indivisible aspect of time and place and their contribution to a precise consciousness which intrigues me. By juxtaposing sound and image, not always using matching field recordings and real time, I want to draw attention to temporality, to question realities, to take time to experience fleeting moments and their universal qualities' (2006).

In 'Swing' (2005) O'Brien manipulates our perception of duration as we watch a child's swing struggle in a strong wind. She states, 'A swing, with its predictable metronome movement, could measure time, at least there should be a regular rhythm to the action of a swing, but here the regular rhythm is disturbed. The swing never passes forward of the halfway marker fixed by the tree but is consistently blown backwards upsetting our expectations' (Lisa O'Brien, 2005). The visual footage is layered with a soundtrack featuring a child singing a Gaelic nursery rhyme: 'hello, how are you, I'm fine thank you'. O'Brien sets up an ordinariness in this scenario which she then proceeds to deconstruct. Everything is set slightly off key as the strange delivery of the song and the offbeat rhythm of the swing disrupt our experience.

This power of disorientation is also utilised in 'Light' (2005) in which O'Brien attempts to film a coastline in the pitch black. The soundtrack consists solely of the overpowering roar of the wind and it is only with occasional bursts of illumination from a nearby lighthouse that we can grasp a slight outline of land. Stripped of all regular visual and audio cues the viewer is left stranded. The only means of orientation becomes our own consciousness and an awareness of the passing time. As O'Brien describes, 'it is no longer where are we?' but 'how long have we been here?'

In 2006 O'Brien represented Scotland on the JIPB cube project with the commissioned sound installation 'Disturbance'.

JIPB Cube Gallery is an international collaboration between four spaces in four countries - Jarnac in France, Chinomiya in Japan, Portree in Scotland and Bovlingbjerg in Denmark. The project was set up to provide an opportunity to show new exciting developments in the contemporary practice of artists from different countries, and to raise and develop the awareness of contemporary art in rural locations. Each venue sites an identical glass cube of 80 cm3 whereby the artists creates a specific work for the gallery space. The work is exhibited at all four galleries and becomes part of a network, to develop a forum for dialogue, discussion and exchanges among artists.

O'Brien's glass cube takes the form of a sound piece which relays audio footage of an unknown protagonist who occupies an isolated house midst the depth of a storm. Shrouded in the darkness of the black cube (which reflects the inevitable electric blackout caused by the storm) we hear the sound of footsteps pacing, doors and windows opening and closing. Occasional bursts of the radio interrupt the time frame as snippets of music and information come through on the intermittent reception. 'Power cables down across the whole of the Highlands', 'ferries no longer running', 'rail services suspended'. O'Brien draws us in, playing on our sense of anxiety as the sound of the storm which has been fading in and out builds to a thunderous finale:

'Sound and visual are of equal importance in my work, I want them to comment on each other and present shifting perspectives. And by interrupting the natural link between sound and image I want to try and raise the viewer's awareness that they are not the centre of the piece. Exposing the construction of some pieces is an attempt to suggest an alternative reality to the viewer. To show a truer reality in addition to the spectacle' (Lisa O'Brien, artist's statement 2006).

Lisa O'Brien (b.1967) studied Expressive Arts at Brighton Polytechnic (1989) which included components of musical composition. Her work as a composer has been performed nationally at venues such as the British Music Information Centre (London) and the National Geographic Building (London). She was shortlisted for the Pepinieres European Award for young composers (1992) and won the Princes Trust Young Composers Award (1992) with her piece 'Losing Gravity'.

Steven McKenzie joined An Tuireann Arts Centre in July 2004 as programme co-ordinator/curator. Situated on the Isle of Skye it is the Hub for International Arts Development on the West Coast of Scotland.

McKenzie's recent coup was to secure An Tuireann as the only Scottish venue for the JIPB CUBE gallery (an international collaboration between artists and galleries from France, Denmark and Japan). This project aims to encourage the awareness of contemporary art in a rural environment, with an emphasis of commissioning new artists to produce challenging experimental work.

Working as a practising artist he uses the portrait to develop work which is crossing the boundaries between photography and painting, but more recently developing work with minority language, considering the translation/interpretation of visual art. He has exhibited widely in the UK, Europe and has been invited to take part in a residency in Canada 2006. The combination of his background as an artist and his relatively new experience as curator, he feels they compliment each other and combine to form an understanding and awareness of artistic development which is both aesthetic and context led.