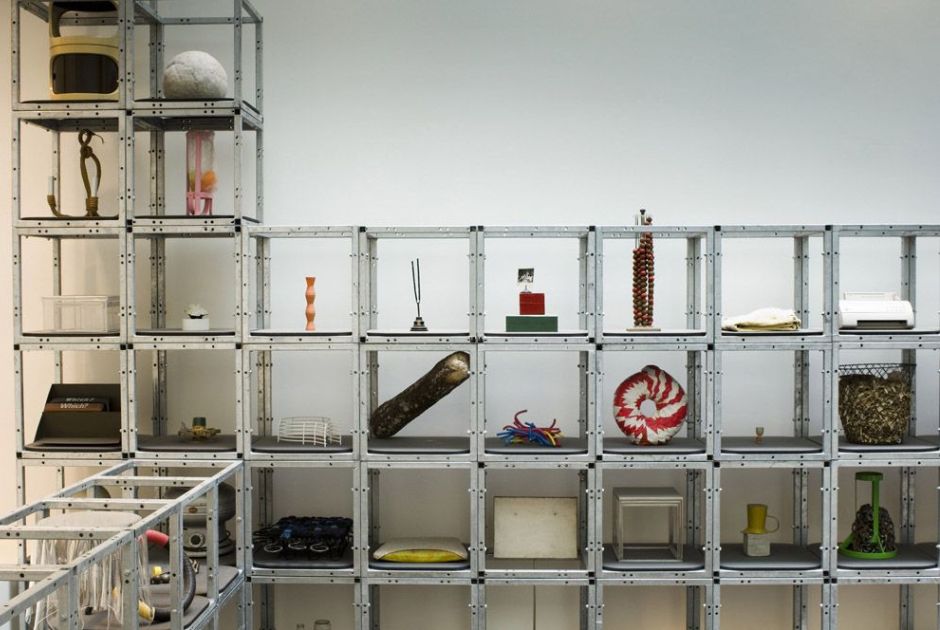 Sport is a good starting point for discussing Keith Wilson’s work. His sculptures are often created with a particular internal logic that one may associate with ‘rules of the game’, informed as much by subjective feelings as by formal or aesthetic concerns. One of his early works, ‘Football in Railings’ (1997), is exactly that, a deflated child’s football, with black and white hexagonals sandwiched between a section of iron railing. A case of incident or accident, the resulting narrative typifies the artist’s deftness of touch, subtle humour and ongoing intent in enjoying the impact when such stuff called art collides with the stuff of everyday life.

Sport provides another anchor for discussing Wilson’s recent sculptural projects, in the contingent relationship between spectator and performer. In the galvanised series of works which have occupied the artist’s recent practice, Wilson begins to acknowledge the body as part of the power relations that make up these day-to-day interactions. The genesis of this series is a work from 1999 entitled ‘Leaning Rail’. It took the form of a white, toughened plastic rail that one might find at a racecourse, positioned on the common in Bournville, Birmingham, as part of the exhibition In The Midst of Things (1999). The work had a practical function of supporting the body, a social function as a place to meet, and formally its presence drew a minimal sculptural line in the natural environment.

Indeed Wilson’s work often attempts to salvage from the muddiness of everyday urban life the clarity of minimalist form. More recently the metric cube – that icon of the minimalist canon – is irreverently re-named a ‘breakfast bar’ as utility has art theory ‘for breakfast’. The breakfast bars are not the finely engineered aluminium constructions that we may equate with 1960s minimalist sculpture, but the slightly dishevelled cousins brought in from the country, playing the part but distinctly uncomfortable in the role. Like most of this series of work they have been fabricated by a farming company that makes them the more likely candidate for an ‘off-the-peg’ solution – a readymade in line with Wilson’s often hands-off approach to his making.

Wilson is acutely aware of the sculptural tradition within which he operates, and language is often the vehicle that connects him to the potency of an art historical past: ‘Leaning Rail’ – Tilted Arc (Richard Serra, ‘Tilted Arc’, 1981, Federal Plaza, New York City [destroyed]). The reference to Serra's seminal public art intervention isn’t simply a flippant exercise of irony or parody, but an intelligent punning that furthers the artist’s shaping of both material and meaning.

In ‘Periodic Table’ (2005), now on permanent display at the Wellcome Collection, London, a number of these ideas coalesce; the found structure, the underpinning knowledge system, the studio work, the formal reference to an historical sculptural practice, the bodily engagement of the viewer. In appropriating the format of the periodic table, he playfully subverts the very scientific structure that orders the matter, the material, the stuff that daily passes through the artist’s hand in his studio practice.

Keith Wilson's work is featured in various public and private collections including the Arts Council Collection, the Saatchi Collection, Leeds Museums and Galleries, and the Wellcome Collection. He lives and works in London.

Michael Stanley is Director of Modern Art Oxford, one of the country’s leading venues for the presentation of international contemporary art. Previously he worked as Director of Milton Keynes Gallery (2004 – 2009) where he was responsible for two Turner Prize nominated exhibitions; Yeah…..you, baby you! by Phil Collins and Cathy Wilkes in 2008, as well as a range of first UK solo exhibitions including Roger Hiorns and Phillip Allen and by international artists including Pae White, Carlos Amorales, Carlos Bunga and Adrian Paci. Most recently he curated the widely acclaimed survey exhibition of work by Marcel Broodthaers and an exhibition of work by the late James Lee Byars. He has also introduced new strands of programming including offsite projects by Johanna Billing, Wolfgang Weileder and Langlands & Bell.

As Curator at Ikon Gallery, Birmingham (2002-2004) he curated the Turner Prize nominated exhibition by Anya Gallaccio, as well as the critically acclaimed exhibition by George Shaw; What I Did this Summer. He has worked with international venues and artists creating collaborations, including SMAK, K29, St. Gallen, Centre d’Art Contemporain, Geneve, MUDAM, Luxembourg and Birmingham Museum of Art, Alabama.

Michael previously worked as Curator of Art at Compton Verney (2000-2002) where he took the lead curatorial role in developing a series of major projects including Aleksandra Mir and the capital development of the gallery which opened in 2004. He also founded an independent commissioning organisation called epilogue (1997–2001) where he curated non-gallery exhibitions such as Tabley (2000).

Michael received a First Class Honours degree from the Ruskin School of Drawing and Fine Art, Oxford University (1992-1995). He is a Trustee of The Contemporary Art Society, a school governor and married with three young children.