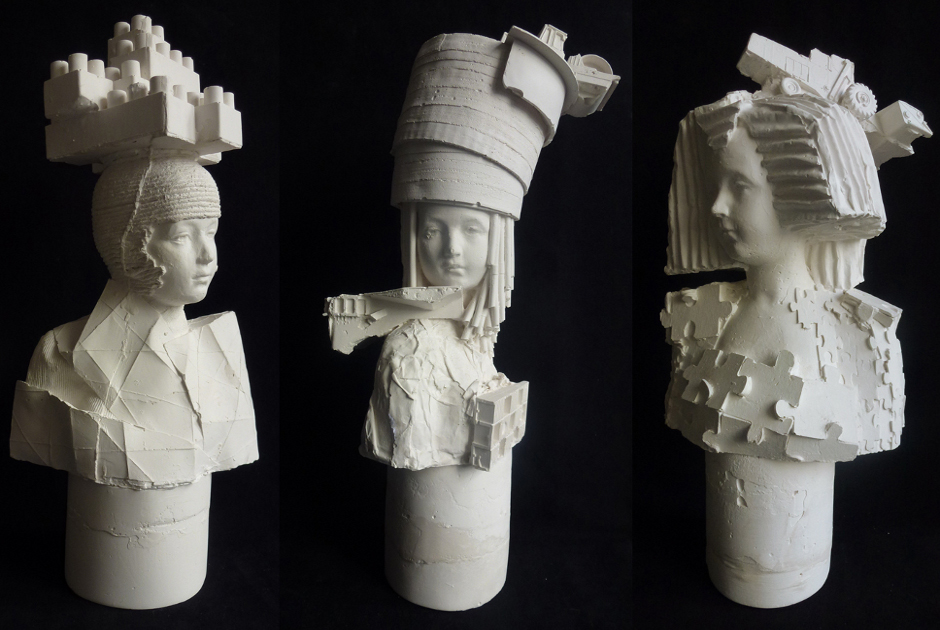 We asked art historian Julia Kelly to select a sculptor for Open Frequency. Here she profiles the work of Kathy Dalwood

Kathy Dalwood’s practice explores the shared concerns and connectivities between sculpture, found objects, and decoration. Fascinated by the swags and curlicues of sculpted reliefs, found high up on the facades of eighteenth and nineteenth-century buildings, she replicates these not by processes of carving or modelling, but by casting and imprinting found objects: pieces of fabric, industrial off-cuts, old toys, small model buildings.

Our cities, public buildings, cemeteries and homes are covered with vestiges of the decorative interests and images of earlier centuries, small carved and moulded details wrought with care and attention despite their apparently peripheral status.

In her work, Dalwood combines these details with the clean lines and angular forms of modernist architecture, one of her other abiding sources of inspiration. The resulting sculptures, friezes, planters, urns and tiles marry the smooth and pared-down aesthetic of modernism with the intricacies of eighteenth- and nineteenth-century ornamentation, whose shapes reveal on closer inspection the traces of unexpected and everyday objects.

The slippages in Dalwood’s work between sculpture and interior decoration have important precedents in the work of twentieth-century sculptors active in the orbit of surrealism, like Alberto Giacometti, who produced plaster vases, planters, firedogs and small cast pieces to complement interior designs by Jean-Michel Frank.

The surrealist fascination with found objects resonates too with Dalwood’s work, as does her imaginative reinvention of earlier historical forms of architectural decoration, reminiscent of Salvador Dalí’s de-familiarising reappraisal of the ornamental details of the art nouveau architecture of Hector Guimard’s Paris. The motif of the glove, so important to the surrealists, appears in Dalwood’s plaster frieze for the St David’s 2 shopping centre in Cardiff (2008 - 9), where it becomes part of a repeated pattern and is exploited for the textural qualities of its soft, twisting fabric forms.

Her series of concrete tassels with their play on weight and tactility recall the unsettling cast of a bronze glove once owned by André Breton, while Dalí’s Retrospective Bust of a Woman finds a contemporary counterpart in Dalwood’s extraordinary plaster busts, her most recent body of work. 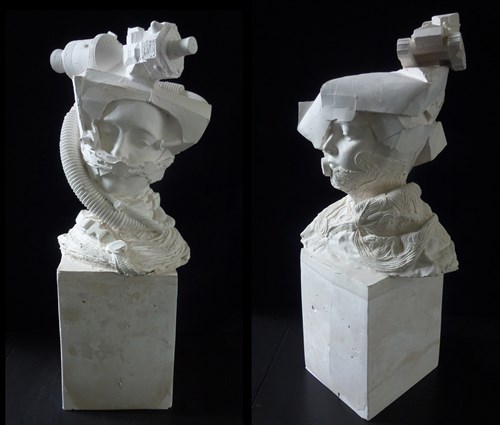 Dalwood’s busts bring together references to extravagant fashions of the eighteenth century with a decidedly modernist sensibility: elaborate hairstyles are rendered through tanks, toy airplanes and vehicles, lego bricks and tourist-size models of civic buildings and monuments. The joins of their assembling are left deliberately visible to give an effect of multiple structures, experimentation and rough materiality, evoking the textured surfaces of mid-twentieth-century British sculpture (of which her father Hubert Dalwood was a key exponent).

Their hands-on manipulation of surfaces and materials in a collision of simultaneous imagery recalls another early twentieth-century precedent: the plaster sculptures of the Futurist Umberto Boccioni, like 'Head + House + Window', whose architectural references are shared by Dalwood’s heads. 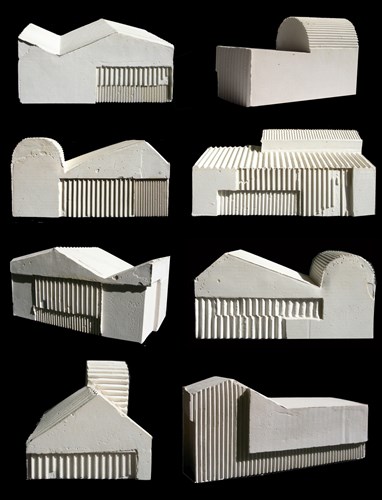 Dalwood’s materials  - plaster, concrete, ceramic, porcelain - take advantage of a unifying colour and texture, bringing a classical solidity to the disparate and provisional sources of her imprints. A series of small-scale plaster models of farm sheds in 2009  - ungainly shacks pieced together from ill-fitting parts - took on shades of Greco-Roman temples, with the plaster impression of corrugated cardboard mimicking the fluting of stone columns. 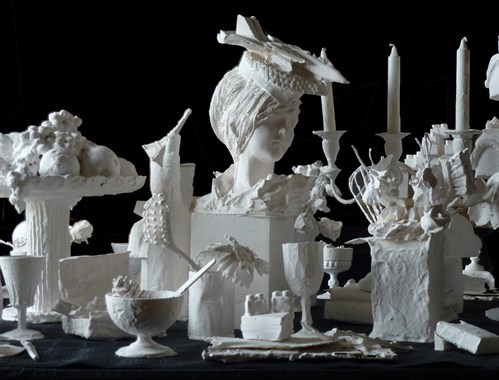 In her works based on historical busts, Dalwood’s use of plaster points to not only its sculptural employment for working models, but also to its suitability for making casts of existing figural forms: antique sculpture in the tradition of the glyptotheque, but also casts from the body and life-masks, with their uncanny stillness and blank expressions. Combined in complex ensembles on large banqueting tables, their cast volumes resonate with other domestic objects around them: bowls, baskets, burger boxes, cups and drinking vessels, playing upon the logic of casting as a process, the container as object. The found objects here are mainly dipped and covered in plaster, which encases and immobilises them, freezing them in time and space, if only momentarily.

Powdery like dust, salt and the icing sugar of elaborate cakes, plaster in these installations by Dalwood is also eminently fragile and friable, a resolutely indoor material. Sculpture and decoration in her work exists in a complex conjunction, challenging and full of surprises, but also imbued with delicacy and a certain vulnerability. 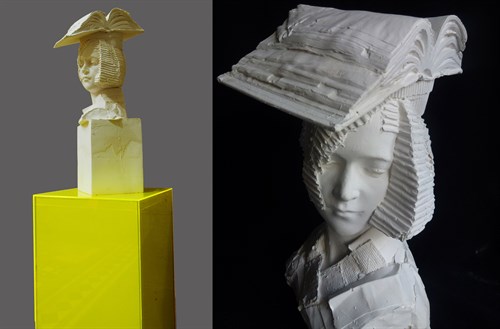 The collection is a contemporary response to the traditionally sculpted statues and busts of the 18th and 19th centuries, but rather than sculpting in clay or stone, the busts are made by direct casting from real things.

The initial sculpture is a 3D ‘collage’ constructed from a huge palette of materials and found objects – model buildings and vehicles, plastic and cardboard packaging, creased paper, electrical and plumbing parts, haberdashery and embossed fabrics etc etc. The plaster casts made from these originals recreate the texture and detail exactly introducing an air of realism beyond that seen in the historical busts which they reference.

The idea of placing architectural monuments, iconic landmarks and random objects on the headdresses was inspired by the intriguing 18th century fad of decorating hats with very large scale, incongruous objects - famously Marie Antoinette adorned a hat with a huge ship in full sail.

The references and objects chosen are diverse but all have a strong three-dimensional form and sculptural presence - whether an architectural structure, a bulldozer, a jet fighter, a book or the extreme three-dimensional headgear and costumes created by contemporary fashion designers such as Junya Watanabe or Alexander McQueen. Juxtaposing different scales, objects and materials, as well as producing unlikely personae, draws attention to the intrinsic qualities of those objects and materials, many of which are low-status, mundane or throwaway, creating a kind of ‘anti-luxe’ aesthetic.

The ‘Secret Society Sculptural Banquets’ are installations in historic settings which provide a ‘live event’ for the Plaster Busts Collection. 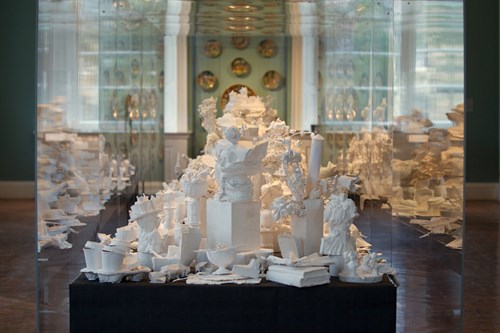 2 August - 7 September 2014
‘Secret Society Banquet’ Installation of plaster busts at a plaster banquet in the Great Hall featuring in the sculpture exhibition: ‘In Beauty May I Walk’.
Doddington Hall, Doddington. Lincolnshire LN6 4RU

Julia Kelly is an art historian and curator based in Leeds, with interests in twentieth-century and contemporary sculpture.

See Julia's profile on the University of Hull's website

Ten artists whose work you should be collecting now >

Take a look at the Open Frequency archive >