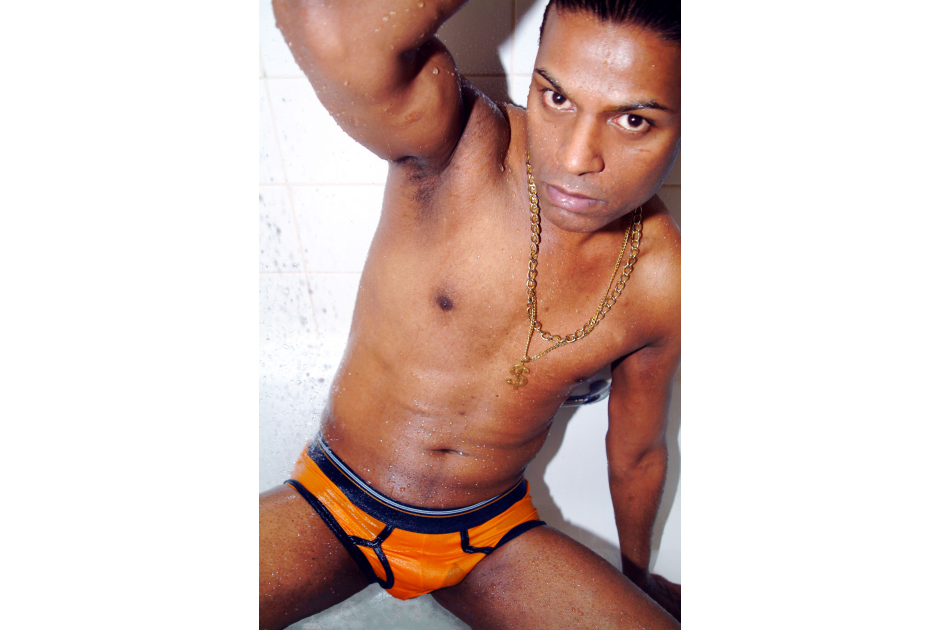 There are many, many examples of literary and visual artists who have adopted alternative personae to apprehend particular experiences, enabling them to physically and intellectually engage with specific discourses or critically interface with an audience. The first few examples that come to mind are Clarence Sanders aka Vaginal Davis; Marcel Duchamp as Rrose Sélavy; Adrian Piper as The Mythic Being; writer Fernando Pessoa and his seventy-two heteronyms; writer and artist Brian O'Doherty as Patrick Ireland (and several others); Oreet Ashery as Marcus Fisher- all characters functioning for time-limited or long-term strategic purposes.

George Chakravarthi has similarly utilized this mode of inquiry and presentation to 'de' and 're' construct definitions of gender, racial identity and sexuality within his live, photographic and video performances. Sometimes he does this by hybridizing culturally-specific iconographic figures, in works such as the video installation 'Shakti' (2003) where an axial character is formed from the Hindu deity Kali and Leonardo Di Vinci's 'Mona Lisa' (1506). In 'Olympia' (2003) Chakravarthi again reprises the position of the central female figure (this time Edouard Manet's 1863 Olympia) and enacts a queer-ing[sic] of this modernist painting in video.

The video installation 'Barflies' (2004) is a performative exploration of transgenderism: surveying the perceptions, interactions, excitement and doubts played out in the public environments that the three protagonists are singularly situated in.

Chakravarthi's very recent works follow a literary trajectory formed from relationships with specific groups and later with the wider public. 'To The Man in My Dreams' (2006) was based around the elusive character of 'daddy' to explore real and projected imaginings collapsed around the relational and sexual overtones of the term 'daddy'. 'Johnny Shekontai', Chakravarthi's latest persona, gestated from his previous work with male and transgendered sex workers to investigate the parameters of gay pornography. In particular the penchant for the 'straight guy' genre, which Chakravarthi endeavors to inhabit across all visual and communicative realms (including the web), to invite and mobilize a multidisciplinary and interactive relationship with the viewer.

George Chakravarthi lives and works in London, where he completed his MA at the Royal College of Art in 2003. He was born in India and was brought up as a Catholic, schooled by one of it's rigorous teaching Brotherhoods - yet because of other family influences, he also absorbed both Hindu and Buddhist philosophies. This childhood, filled with a complex multi-cultural trinity of deities, icons and belief systems did not particularly affect or disconcert him until his move to England at the age of ten. Settling in the U.K. was not so much a re-location as a dislocation, triggering an ongoing process of exploration which now informs his work. This examination of his own selfhood has created work that deconstructs socially accepted definitions of gender, sexual and racial identity, the intense scrutiny of his personal experience challenging those received wisdoms.

Chakravarthi has performed and exhibited his work nationally and internationally. Previous commissioning bodies include the BBC, Artangel, INIVA, ACE, The British Council, The National Review of Live Art and Body/Space/Image. He was 'Thinker in Residence' at The Live Art Development Agency in London (2007) and is currently a Visiting Lecturer at The University of Brighton.