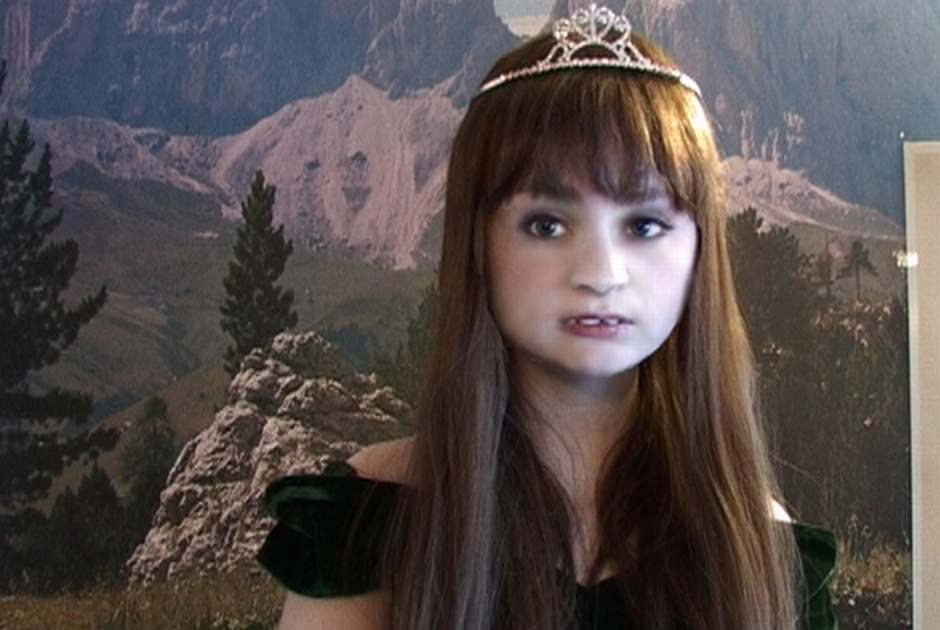 Erica Eyres is a Canadian artist, living and working in Glasgow. Inspired by society's modern-day desires hot-housed to an extreme by American trash TV, her uncompromising drawings and fictional documentary-style video works continue to create a growing cast of characters reacting to the vicissitudes of life.

The artist herself, with the aid of make-up, wigs, costume and props, plays each character in her video melodramas. In 'Baby Marleena' (2006), Eyres is the exploitative mother, the mermaid daughter and the troubled teenage boy whose parents pay for him to visit Baby Marleena at home in her bath tub in order to be 'cured'. The dysfunctional family unit is further explored in 'Jenny Johnson' (2006), where a fawning, disadvantaged daughter who has so obviously escaped the tyranny of dental braces, is driven to kill popular pupil Jenny Johnson for a star-shaped earring as her domineering mother has denied her the same ear piercing rite of passage. The need for belonging and fitting in is a feature in Eyres' works, taken to the extreme in 'Without Arms' (2004). The story is recounted through individual interviews with four women who form their own sorority during college by collectively deciding to cut off their right arms. Moments after, one member decided to have her arm surgically sewn back on. As a result, the group excludes her. In the age of cosmetic surgery, 'Destiny Green' (2006) takes the need to erase unwanted features to black limits with a child beauty pageant queen choosing to have her whole face surgically removed in the ultimate rebellion against this industry.

Ideas of attractiveness, sexuality and beauty are further turned on their head in Eyres' drawings of teenage girls and women. The co-ordinates of the perfect symmetry of the face and body are morphed in these portraits. Eyes are too small and squint, small breasts sag, large trout pouts droop. A procession of older women with rich names evocative of past Hollywood beauties such as Lana and Rita pose for an unseen presence – Shirley with her slumped shoulders and coquettish strapless baby doll top smiles demurely stage left. Eyres' drawings may be provocative in their focus on elements of the grotesque but they are never cruel. All meticulously rendered in ballpoint pen the details of the hair for example, such as the soft wave of a 70s flick or the blunt cut of a sculptural fringe, is sensitively and lovingly created on the page. The women all have an air of self-possession and confidence too. Their eyes, almost sticky with the viscous quality of the pen's ink often directly meet the gaze of the viewer or of themselves in the mirror.

Erica Eyres (b.1980, Winnipeg) studied Sculpture at University of Manitoba (1998-2002) then went on to do an MFA at Glasgow School of Art (2002-2004). Forthcoming exhibitions include a solo show at Rokeby, London in April 2008 and a group drawing exhibition at Jack Hanley, San Francisco.

Eyres lives and works in Glasgow and is represented by Rokeby, London.