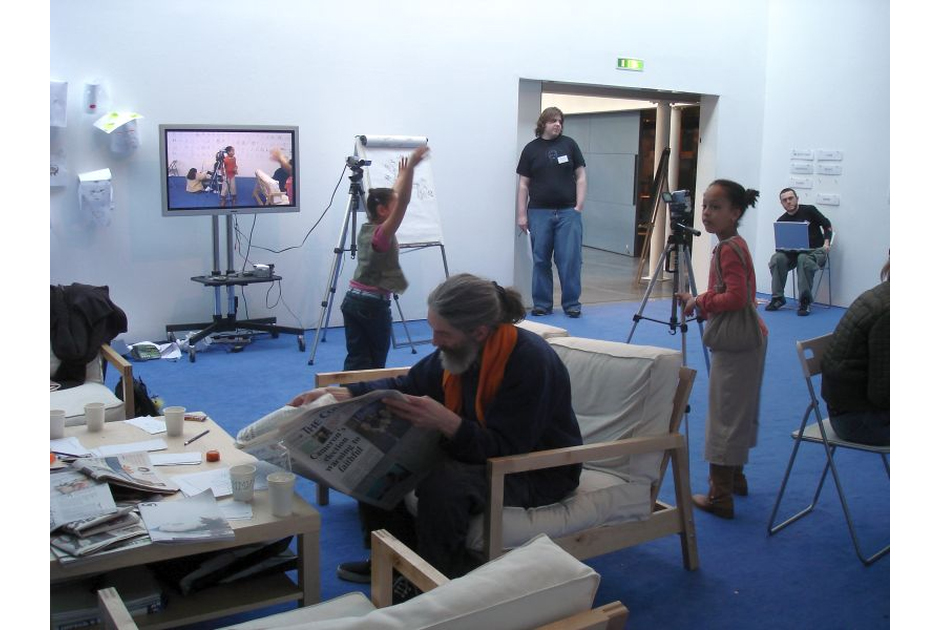 Derek Lodge reckons that he has something in common with Tracey Emin - you have to like him to like his work.1 For his videos, audio works and performances, Lodge takes on the role of the narrator and in doing so becomes the genial host introducing his practice. Seamlessly through his storytelling, by uniting disparate groupings of artworks, film sequences and social groups, his verbalised thought patterns are deftly arranged into melodic verse. Given free-range, they roam from subjective musings on his failures as a contemporary artist, through objective readings of existential philosophical texts, arriving at internet experiments with glow-in-the-dark tomatoes. The songs, set mostly to synthesizer and acoustic guitar, lend the work the multi-tasking intensity of a one-man-band, the solitude of a boy's bedroom, or as Lodge ironically coins it, the air of 'an upbeat hypnotherapy cd'.2

For an early audio work made for The Sculpture Show (2005),3 Lodge took the other artworks on display as his starting point. The visitor circumnavigated the exhibition, listening to Lodge's reactions to the artworks, mixed with musings on his upbringing and hometown of Dundee – the latter a certain liberty to take, as the show was located in Glasgow. Lodge further refined his approach of bringing autobiography and his own creative process together in 'Statement of Practice' (2005). Here he took the ubiquitous artist statement – a testament to creativity, concepts and commitment – to a new level with his own set to music: 'Got a 2:2, then signed on, got a job, I work now in the DCA as well as this'. By telling the truth about his situation, Lodge's work creates a conspiracy between artist and audience. By establishing a friendly familiarity with the listener, he de-mystifies art practice and the stereotype of the contemporary artist.

One of Lodge's adages is that if art were a business you would think of the customers. Derek Lodge & The Duty Managers: Word Processor (2006) brought the autobiographical to a bigger stage – Derek's place of work as an invigilator at Dundee Contemporary Arts. Normally with a remit to interpret and advocate art to the DCA's audience, the tables were turned with Lodge the artist on show. He divided the gallery into a music studio and social space. Teams of 'word processors', made up from a changing group of collaborators, were invited by Lodge to interview gallery-goers on diverse topics of their own choice. A filmmaker was also invited each week to make a film of the events. Every Friday evening during the show's run, Derek and his chosen band performed live a score that was created from the phrases that had been word processed, whilst that week's film played to the gathered audience. The immediacy of this process created a real connection between artist and audience. This was an artistic experiment that saw the artist staunchly remaining in the space rather than walking away once the work was up on the walls.

In 2006 Lodge completed a residency with Yorkshire ArtSpace, Sheffield. The resulting exhibition The Butcher Called me Love is what Lodge jokingly refers to as a 'musical documentary' in the mould of The Who's 'Tommy'.4 Lodge used his eight weeks meeting four different groups. The film is made up of vignettes of these people who obey their enthusiasm without question, ranging from Sheffield City Morris Dancers and the Sir Cliff Richard Meeting House of Sheffield to the Sheffield Caledonian Society. Artists are democratically included in the mix. In the section entitled 'Life Drawing' we see Lodge become a member of a life drawing class in Sheffield, following an invitation from two women who attended his first artist's talk there and heard him express regret at no longer drawing. As Lodge concentrates to fit into the role of an artist who can draw and paint, we see slightly tragic pastel offerings of out-of-proportion reclining nudes. 'I was sure I had some natural ability but it turns out I need to be retaught'.5

The film 'Revisited' (2008), the result of a residency at Cove Park, retains the ideals of the artist's residency by providing Lodge with the space to make new work. With time on his hands however Lodge chooses to focus on introspection, examining his ideas -good and bad- and the emotional difficulties fraught in the artistic process: how to get started then make something meaningful?, 'I only seem to be able to make work when the right combination of guilt, fear and stress triangulate and pull the trigger of the starter's gun'.6 Letting himself be guided by random influences 'Revisited' is a travelogue of revisited ideas; on the residency, from old college sketchbooks, to a message he leaves himself to activate in his future artworks in ten years time.

Lodge's process of telling you his process is akin to the performers of Sheffield Circle of Magicians in The Butcher Called Me Love. Their gestures are at pains to show the audience what they are presenting is a normal everyday coin, only to transform it into an outrageously shiny uber-sized coin by sleight of hand. Lodge is driven to share with us his artistic failures, but his acute observations and unerring ear for pathos and comedy ensure his work is something special.