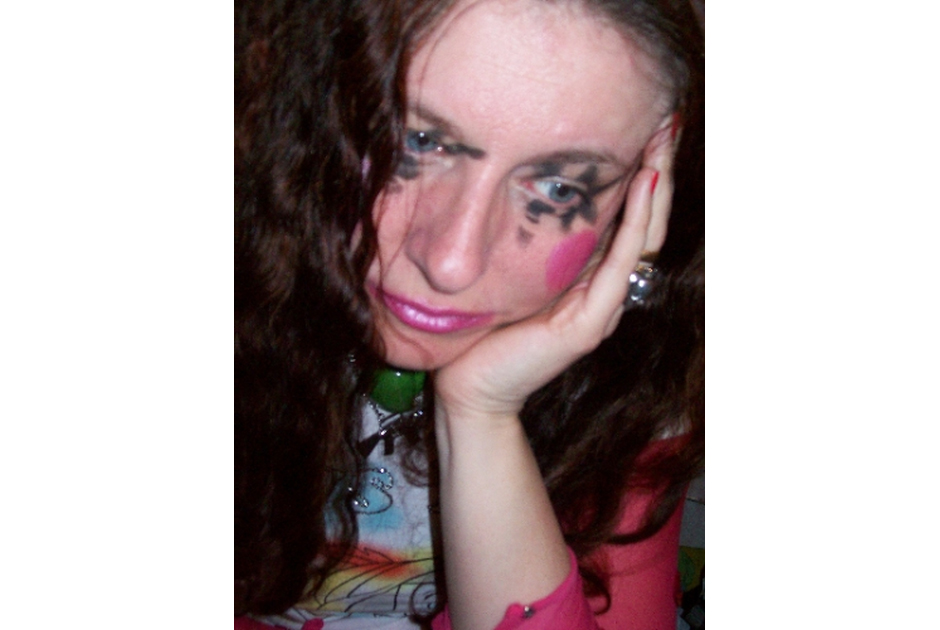 Delaine Le Bas's magpie practice encompasses painting, sculpture, film, embroidery, installation and well just about everything else in a crazy mixed media bricolage. Her Romany background is apparent in every flourish and twist but is never a forced point, integrating effortlessly within the fabric of her installations.

Her work often has a very hard and sinister edge, unearthing uncomfortable truths and featuring troubling imagery. She uses cute fairy tale-ish motifs such as a skipping lamb and a sweet looking girl but these are then juxtaposed with monstrously over garish embroidered flowers, scrawled obscenities, sequinned skull and cross bones and a cornucopia of other images in a hellish hallucinatory landscape. Her installations are often positioned in small rooms or enclosed spaces and again the little girl appears this time manifested as a sinister child mannequin with a Union Jack hood conjuring up images of the dwarf murderer in Nicolas Roeg's film 'Don't Look Now'.

One of Delaine's most poignant series of works was her 'Rubbish Dolls'. These were made in 2005 when there was an ongoing NIMBY news story about Gypsies and The Sun famously led with the headline 'Meet Your Neighbours' and an image of a rubbish strewn caravan site. The Rubbish Dolls are assembled using cheap plastic doll faces around which is twisted a black bin liner to create a rudimentary body. In Delaine's show 'Room' at Transition Gallery in 2005 one of the dolls was fixed on to a small circular canvas featuring psychedelic flowers and a mock Tudor house while others were left scattered in the corner of the gallery, like any pile of rubbish.

Le Bas's work has an intrinsic honesty to it which is at odds with much current contemporary art practice. She has not invented a persona or cobbled together the real with the fictional. Her art is real life and much of her inspiration is from direct experience. This has often unfairly categorised her as an Outsider artist despite the fact that she attended art college and is very knowledgeable about contemporary art. 'All I can do is my work, to address all this bullshit about stereotypes. But I do have to address it.' She wrote in a correspondence with the artist Alex Michon in 2005, 'I'm painting, embroidering, drawing and going crazy with it. It's like a huge traffic jam in my head and I can't move it and work fast enough to clear it but I'm trying.' Her 2007 appearance in the first Romany pavilion at the Venice Biennale has led to wider recognition and although her background is very important her work is now being noticed in its own right.

Le Bas is represented by Gallery Giti Nourbakhsch, Berlin and Galleria Sonia Rosso, Turin, Italy, where she will have a solo exhibition later this year.

Cathy Lomax's curatorial interests are very varied; her projects are drawn together by a theme which is generally quite tangible and is often based in aspects of popular or everyday culture. Most of her curatorial work takes place at Transition Gallery which is the space that she set up in 2002 after finishing her Fine Art MA at Central St Martins.

Lomax is also a practising artist; she likes to draw all the strands of her practice together which means she will often make work for projects that she is curating. In her curated shows she likes to mix together emerging and more established artists often combining practitioners from different strands of the arts. Previous projects have included fine artists alongside illustrators, fashion photographers, costume makers etc etc.

The educational background of the artist is irrelevant and she often works with outsider artists and practitioners who haven't followed the traditional art school route. 'I like to relate my curated projects to where thay are taking place and generally avoid traditional 'white cube' style exhibitions.'