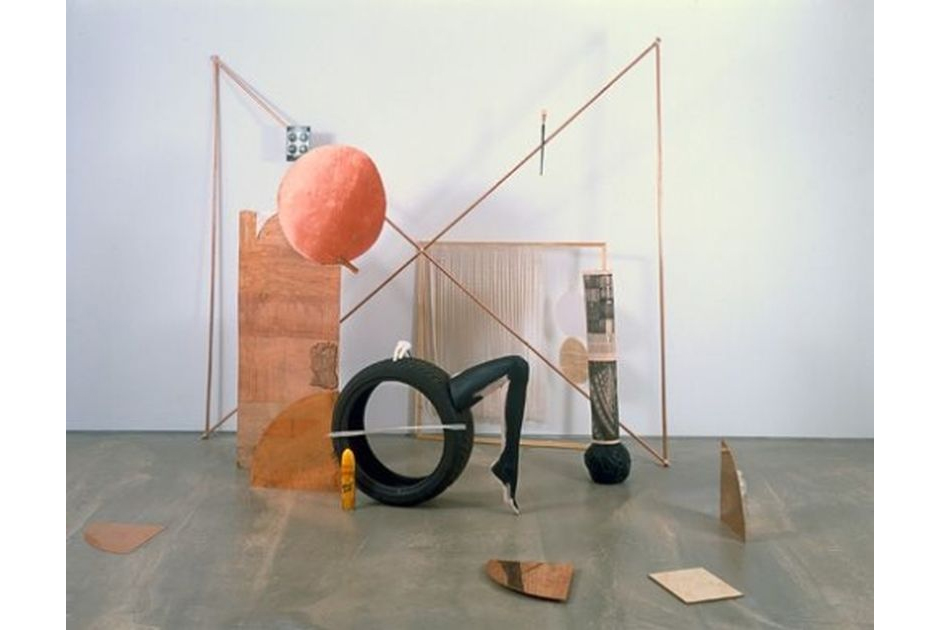 If you want to view paradise
Simply look around and view it
Anything you want to, do it
Want to change the world
There's nothing to it

Its interesting to still observe that the effervescent spirit of Dorothy Gale from The Wizard of Oz continues to be omnipresent in the work of Anthea Hamilton. Since coming into contact with her work in the 2002 Tate Modern show, From Tarzan to Rambo which featured Hamilton's languid single-screen video rendition of Over The Rainbow, Hamilton's practice still continues to utilize the genre of performance across the disciplines of photography, drawing, and video.

More recently her practice has developed towards sculptural compositions; creating installations that incorporate ready-made objects, ephemera and drawings creating a series of tableaux that express from her perspective a desire for change and other possibilities. Her recent shows such asAthens, 2006 (IBID Projects, London) and Cut-Outs, 2007 (Galerie Fons Welters, Amsterdam) and her most recent two-person exhibition with Thomas Kratz, 2007-8 at Mary Mary, Glasgow creates the opportunity to discuss this sculptural development in her work.

AB: So the last show that I saw of yours, Athens, in 2006 at IBID, featured a move towards installation and sculptural compositions. Could you perhaps talk about the movements in your recent practice and what concerns you are exploring?

AH: The format may have changed from video to now three-dimensional work but it's still very much performative, or about creating a performative space. The limitation that I found with appropriating existing film was that there wasn't enough space for a personal, self-initiated action, and so the movement in to making three-dimensional things was that these were props to put into my own narratives, but then the films never came into being, and then they happily existed by themselves [as objects]. They were self-portraiture in a way – previous works had featured me, but now the objects represent me or are connected to myself.

AB: So besides these props being representations of you or sculptural formations, can the spectator activate them in some way? What is the spectator enabled to do in this scenario?

AH: That's something I'm interested in getting closer to - a situation where the work can actually be touched and physically be interacted with, I guess conventional viewing usually restricts this in galleries and and so on, also because I enjoy making quite fragile things - you can't touch them, they'll break or topple over - that restraint of touch is something in the work too. That's why it's important for me to make an environment, for example in Athens the space was tiled; it was about sensations , hearing and feeling your heels going across the floor, or in Cut-Outs the gallery was all blue…

AB: People like Franz West and his Adaptive sculptures or even thinking further about the bodily relationship of scale in your work, artist Stanley Brouwn comes to my mind … so do you feel that this is what you're trying to work towards or might it point towards other materials that you can use that might enable that kind of engagement?

AH: Yes, I'd like that, I make decisions with the body always as the first point of reference so it makes sense to think of developing things in those terms.

AB: Aside from the performative responses or scenarios that you try to present, what are the themes that interest you in particular?

AH: It's really wide-open and can change from work to work. Sometimes there are more formal concerns like having a work sit in a certain way at a certain scale, and those decisions might be informed by art historical or cultural references, all of that's employed or adopted or appropriated so that I can go on and explore these things on a private level; its self-positioning in a way – like an apprenticeship perhaps - there's a certain degree of acting out that goes on.

AB: So in a kind of way it sounds to me that you're creating another kind of environment as a way of getting to know yourself through an alternative scenario, sounds therapeutic…

AH: Kind of, it's definitely a way to explore something, like a lot of references in the Athens show came from research into ancient Greek or Roman civilisations, and its about spending time with a particular set of ideas or beliefs, trying to learn about that history...

AB: The exhibition then is a form of making that information tangible?

AH: Yes - for myself - but I don't expect that to translate as a set of information that's the same for everyone

AB: The environment that you created at Galerie Fons Welter, what were you exploring in that one?

AH: I wanted a space that would be blank, neutral, even more than a white box gallery, which is something I think can be quite mannered. With blue-screening the idea is that you fill that blue in with anything you want at post-production level, so when you're in that space, you're in something that's still in production and in an unfinished state

AB: So it's in progress…

AH: Yes, and perhaps also that the surroundings a work is in shouldn't be taken as the context to read it.

AB: If I'm allowed to ask, what are your plans for your solo show at Chisenhale?

AH: I don't want to go into it too much at this point, but maybe can say that it's a continuation of ideas about environments for work and combining that with specific sensations or energies from chosen pieces of music and the characters that come out of that process. I'm kind of going back on myself to filmic mimicry but after a period of working exclusively with materials and composition - so its all kind of folded in on itself - its about the energy that that event has, and using it as a framework.

Upcoming shows in 2008 include the group shows Art Now: Strange Solution, Tate Britain, London (2 February - 13 April 2008), The Martian Museum of Terrestrial Art (Barbican Gallery, London, March 2008) and a solo show at the Chisenhale Gallery, London in May. Hamilton lives and works in London.