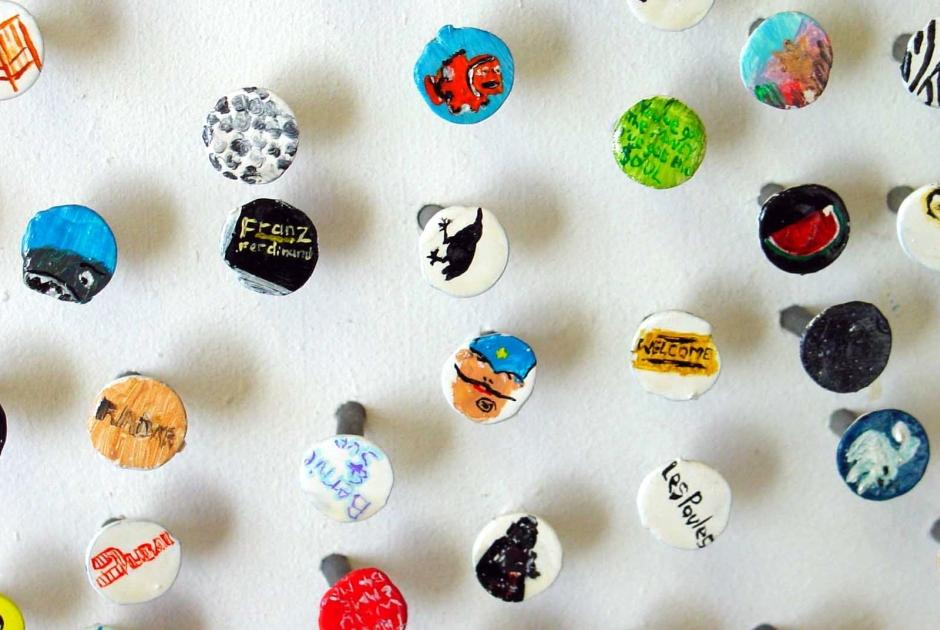 Andrew Bracey gains inspiration from a vast array of sources: advertising, cinema, the internet, holiday snaps, catalogues, music, magazines... his work exploits the enormous amount of choice that exists in a culture increasingly saturated by the visual. He states, 'I like just stumbling across things, or latching onto something that's a bit odd. DIY stores and pound shops are a really big influence'. (1)

Bracey is well known for the mixed media painting based installations, 'Clout' (2003- 2006) and 'Various Titles' (2004-2005). 'Clout' is a myriad collection of minute paintings applied directly onto the heads of roofing nails. The work appropriates a vast quantity of subjects: Jesus, Johnny Cash, a wind farm, album covers, business logos, the Union Jack. The plurality of the work; the freedom of its visual systems allow for multiple readings. As Bracey states, 'They can be viewed as a load of nails, individually as separate paintings or on mass as a big dot painting'. (2)

In 'Various Titles' (2004-2005) 750 tiny canvases depict a plethora of images with the same non-hierarchical approach adopted in 'Clout'. Ranging from the alluring to the downright banal (amidst a handful of more poignant depictions such as a pre 9/11 New York skyline) Bracey exhibits all canvases with equal authority. No two individuals would take the same route through this installation; everyone is free to arrive at their own narrative, to make their own choices and to apply their own personal significance to the mass of material presented. 'Its like flicking through a Sunday supplement, where you pass over most things', says Bracey, 'In this culture we live in, we're used to moving between things, using the remote control, and only giving a small snippet of time to anything. Its like the way the internet works. You click on a site which takes you somewhere else'. (3)

Bracey's installations are composed of a quantity of individual works that amalgamate to make a whole. The overall structure of the work is vital to our experience. Critic Tim Dunbar believes Bracey is 'driven by a concern for the basic language and historical precedents of modernist abstract painting, especially the quintessential pictorial effects associated with the interaction of mark/dot with colour as pattern'. (4) Indeed, despite taking an experimental and playful approach, Bracey is keen that his work is seen first and foremost in the context of painting. He states, 'it is similar to the way Stockholder (Jessica) says her work is painting rather than sculpture (5). But rather than making reference to one particular period or mode, the work is about the boundaries of what painting can be.

German entrepreneur, Carl Hagenbeck opened a new zoo outside Hamburg in 1907: the Stellington Tierpark. The zoo presented uncaged animals for the first time, with all species appearing to enjoy a deceptively close existence amid the carefully constructed moats and terraces. Visitors were also offered the illusion of close proximity and the zoo became known as Frienlage - free enclosure.

Inspired by Hagenbeck, Bracey recently undertook the construction of his own 'Frienlage', playfully collating a vast menagerie of creatures. Bracey painted his images on scraps of mdf, corrugated cardboard and sea-scoured beach-glass. Each exhibit was then displayed in an appropriate habitat with the aid of domestic props. A knob of blu-tac becomes a meerkat mountain; a set of kitchen scales makes an inviting penguin pool.

Critic, Judith Palmer states 'the works in the 'Frienlage' series aim to understand and replicate the essence of the zoo-going experience ... To view the polar bears, you must peer through the glassy curve of a jam-jar; to spot the owl, blink into the gloom of a cardboard box. Examined through a model-makers magnifying glass ('Dance', 2005), a painted monkey slips in and out of sight, offering up tantalising glimpses of tail-tip or ear-tuft before mischievously disappearing from the observer altogether... a jumble of animal portraits are propped randomly along a shelf. Tapirs rub haunches with hippos, each jostling to catch the viewer's eye... Scale is in constant flux: a pachyderm's trunk is the same size as a parakeet's beak, a jaguar is dwarfed by a tree frog. The shifting perspectives of receding and advancing genera mimics the visual confusion of first emerging through the turnstile, as the zoo-visitor attempts to wrestle with the conflicting choices on offer'. (6)

The zoo has always been an artificial creation. 'A mock wilderness in the midst of the urban environment' (Judith Palmer) and Bracey's 'Frienlage' acknowledges this artifice. The installation also exposes the links between gallery and zoo, highlighting the parallel between how we consume works of art and how we consume nature. In 1985 a study of visitors to London Zoo revealed that spectators visited the monkey enclosure for an average of only 46 seconds and spent just 32 minutes in a pavilion containing over a hundred cages. As Judith Palmer reminds us, 'this is probably about the same time it takes to scan glazily past a wing-full of art treasures, before succumbing to exhibition overload'. (7)

Bracey manages to engage with matters of the everyday, taking ordinary commonplace images and materials and transforming them through his skill for combination and arrangement. He deals with the man-made and the hand-made, the individual and the mass, the artificial and the natural, connecting and repersonalising images through the process of painting. Each subject is approched in the same playful and open manner.

Sally Lai is a curator and currently a fellow on Clore Leadership Programme. She has an MA in curating from Goldsmiths College, University of London.

Until recently, Sally was curator at Chinese Arts Centre, UKs centre for the promotion of contemporary Chinese visual arts where she was responsible for devising and running of the organisations artistic programme. Amongst the curated exhibitions were Happy and Glorious, a solo exhibition by JJ Xi and Cai Yuan,(Mad for Real),Re-fashion, a fashion based exhibition which featured designers Julian and Sophie, Justin Oh and Maria Chen Pascual, Whodunnit?, a murder mystery video piece by Ming Wong.

Her previous experience includes working as a Visual Arts Officer at Arts Council, London, curator of contemporary Asian art in Hong Kong and curator of freelance projects. She has given talks and lectures at the National Portrait Gallery, Photographers Gallery, FACT, MMU, the Fashion Curation course at London College of Fashion, and presented papers at conferences at University of Westminster and Emily Carr Institute, Vancouver.

Her advisory roles include acting as a Specialist Advisor to the Visual Arts Department of the Scottish Arts Council, a member of the Cultural Diversity Advisory Group Manchester, a nominator for the 2003 Paul Hamlyn Award for Artists, a member of the Think Tank for Freeness: a music project by Chris Ofili.

She is currently on the Action Group of Missions, Models, Money: a national action research programme addressing the challenges faced by cultural organisations in enhancing sustainability, a member of Culture Northwest, and a RSA fellow.