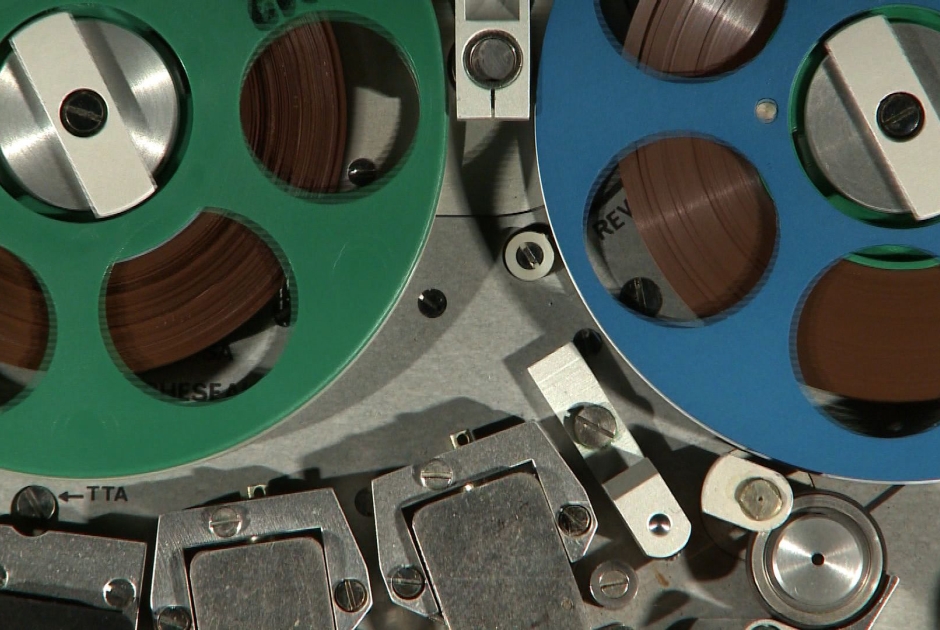 Peter Richards is a Belfast-based artist and writer. Here he profiles the sound and video work of Allan Hughes, an artist working from Orchid Studios in Belfast.

The voice forms an integral subject of Allan Hughes's practice; it is at once narrative, material and ideology.

Hughes negotiates this apparent contradiction as an aspect of the duplicity inherent in its recorded and mediated form, and its role as the primary component of a synchronised and homogenous representation. For Hughes, the voice is not simply a medium for communication; it has a political currency in its materiality and has exchange and use value beyond communication.

His video and sound installations explore the precarious space between subjectivity, history and remediation - the processes of refashioning. The works produce a dialectic position between spectator, installation apparatus and subject matter, challenging the standpoint of each through that of the other.

Practising primarily in video and audio, Hughes establishes the listening position and the voice as primary agents in the dialectic exchange, and as the fundamental devices for the deconstruction and recontextualisation of historical narratives and ideological representations. In particular his works have focussed on the function of synchronisation as that point which both splits and sutures our experience of the audio/visual construct. It is within this fissure that Hughes's synchronised, two-channel video works explore our role in the production of remediated forms of history and its representation.

'Nagraphobia' (2009), Hughes's most recent configuration of works, is centred on the synchronised, two-channel piece ‘Point of Audition (Reverse ADR)’ and features an actress attempting to lip sync a reconstructed vocal performance of a transcript from Jane Fonda’s Radio Hanoi broadcasts which she made in 1972 – though the actress appears as Jane Fonda in her role in the 1971 film Klute, while also making discrete references to the Dziga Vertov Group film, Letter To Jane (1972). The work is constructed around the concept of a stalled fantasy; the idea that a recovery can be made of both meaning and voice. Moreover, it is concerned with the dialectic question of how a historical recovery can be made from transcriptions, recordings and memories. The act of listening is figured as the key aspect of the production by having an actress attempt a post-dubbed, synchronised performance of the dialogue whilst situating the spectator in the space between audio, analyst, and image.

Hughes’s preoccupation with the construction of historical narrative is unsurprising given his experience of living through the heavily mediated ‘story’ of Northern Ireland. The ‘Troubles’ may now be over, but it is at this historical juncture that a narrative of the past forty years is being written and rewritten. In living through this process Hughes’s practice questions the narrative forms that not only describe the past, but also re-imagine it as a mediated reality.

In a recent series of photographic works, ‘The Listening Station (post-production)’, 2010, Hughes created an epilogue to the video works he had made prior to the recent dismantling of the British Army communication post on Black Mountain in Belfast. The post, located on its strategic vantage point above the city, had become an iconic symbol of Britain’s political and military surveillance.

In documenting the partial and ongoing dismantling of the military apparatus, Hughes enters into a negotiation with the unstable history of the site through capturing something of its psychogeography. The idea that through this process of devolution the place will some day return to a ‘neutral’ existence is manifest through the conditions of surveillance: contrasting the exterior panoptic visual profile of the facility against the internalised speculative activities of the viewer.

In simulating established forms of mediation, Hughes engages with deconstructing the accepted narrative structure of audio-visual representation, combining the implied transparency of documentary representation with the opacity of fictional narratives.

Allan Hughes lives and works in Belfast, Northern Ireland. He studied at the University of Ulster, Belfast (BA Hons Fine Art, 1996-99 and Master in Fine Art, 2003-05) and has exhibited widely including Spain, Germany, Finland, the US, Taiwan, Russia and Japan. He has received a number of awards and residencies, most recently the Irish Museum of Modern Art Artists Residency Programme in 2009. His work is held in the collection of the University of Ulster.

Allan Hughes is represented by the Golden Thread Gallery, Belfast.

Peter Richards is an artist and curator, born in Cardiff in 1970, and based in Belfast since 1994. He spent two years between 1996-1998 as a director of artist-run Catalyst Arts working alongside the likes of Phil Collins, Mark Orange, Niamh O’Malley, Susan Phillipsz, and Dan Shipsides. Whilst at Catalyst Arts he began to share time between his studio practice, and creating contexts and opportunities to explore the works of others, a way of working that he continues to this day.

He became Gallery Director at the Golden Thread Gallery, Belfast, in 2001, and has devised its artistic programme since, realising solo and group exhibitions in the gallery and at venues across China, USA and Europe, working with artists such as: Locky Morris, Franc Purg, Kevin Atherton, Susan MacWilliam, Paul Seawright, Willie Doherty, Gerard Byrne, Marjetica Portc, Seamus Harahan, and Colin Darke.