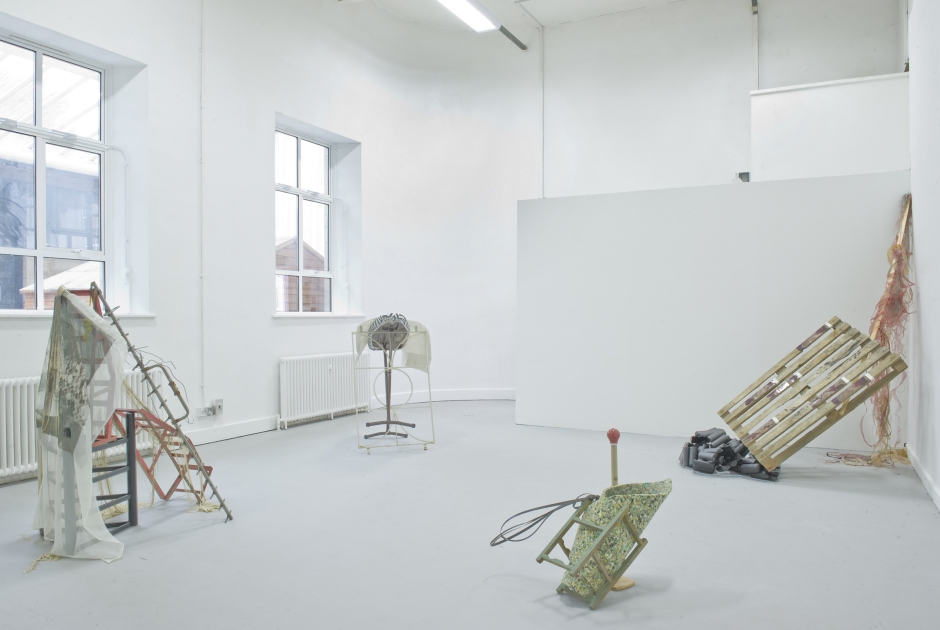 There’s a nervous energy in American-born Zanne Andrea’s precarious sculptural assemblages. Tangled and teetering, they incorporate all manner of industrial, domestic, cultural and historical detritus; however her chaotic arrangements belie a sophisticated consideration of object, image and form. With a confident and subversive visual language, Andrea’s work stood out at the Bath Spa MA show, brashly demanding attention.

In 'Untitled' (2013), a chevron-patterned ironing board tilts in the air, both caught in and propped up by a rusting wrought-iron gate. Draped casually on top is a map of Northern Africa, with several blue plastic ice cubes clustered around countries involved in recent social uprisings, like pieces on a battle strategy game. On learning that the map is circa 1954 and the ironing board from the 70s, echoes of past revolutions, power struggles and political upheaval filter through. 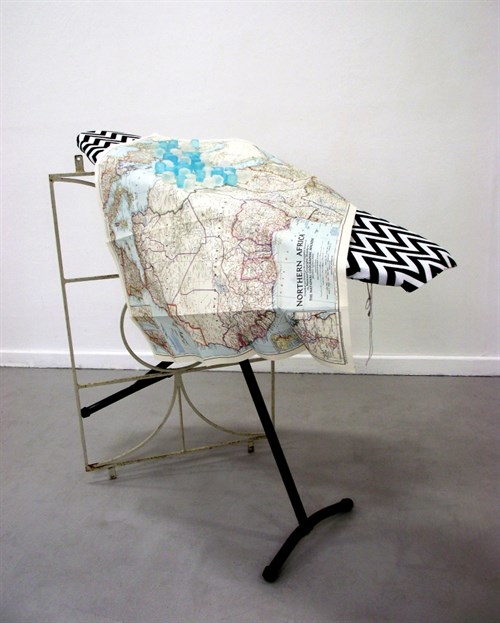 Provocative titles, along with very specific lists of materials, emphasise provenance and open up layers of meaning. The tower-like 'If people behaved like governments, you’d call the cops' (2013) incorporates an aerial and a television stand among other things, coarsely referencing media and propaganda. Shrouding the structure is a translucent curtain with a black and white image transferred on to it. Purposely difficult to make out, it seems to depict an important gathering of suited men, no doubt at some significant historical event. In the small, tightly arranged 'Blowback' (2013), a colourful cone of carpet underlay sourced from the US is trapped between a slanting wine rack and mug tree. An erect unlit red bulb and knotted mesh of black binding tape signal an ominous warning in a seemingly impotent situation. 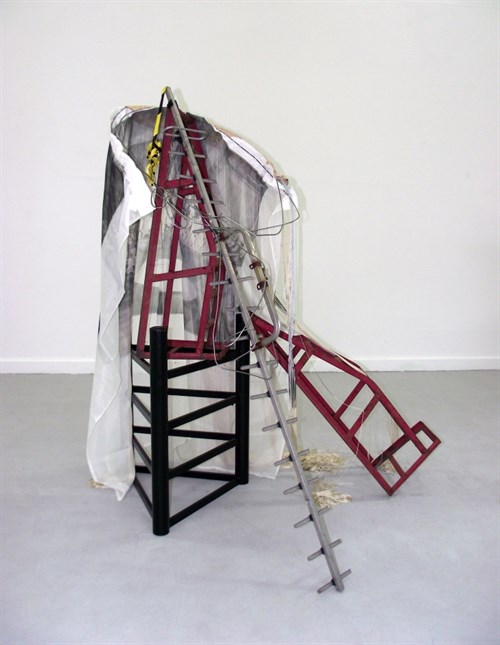 The works bring to mind the carefully structured, associative yet open-ended sculptural assemblages of Isa Genzken or Rachel Harrison. Similarly, Andrea takes an intuitive approach to sourcing, reconfiguring and fusing materials which relate to her research, until reaching a kind of critical mass. Ballsy, on the brink of confrontational, whether alluding to government, economy or conflict, her works address a deep anxiety surrounding the current global state of instability and the slippery nature of collective memory. They lure you in and invite you to enjoy and puzzle over the visual details – texture, pattern, form, colour, image – and unpick the myriad possible meanings.

Leela Clarke is a curator, writer, arts producer and arts marketing professional based in Bristol. She completed a BA in Fine Art at the University of Reading in 2008. In the past she has worked with Ffotogallery, Tate Britain and Picture This and she currently works on freelance projects and writes for Aesthetica Magazine, this is tomorrow and Photomonitor.