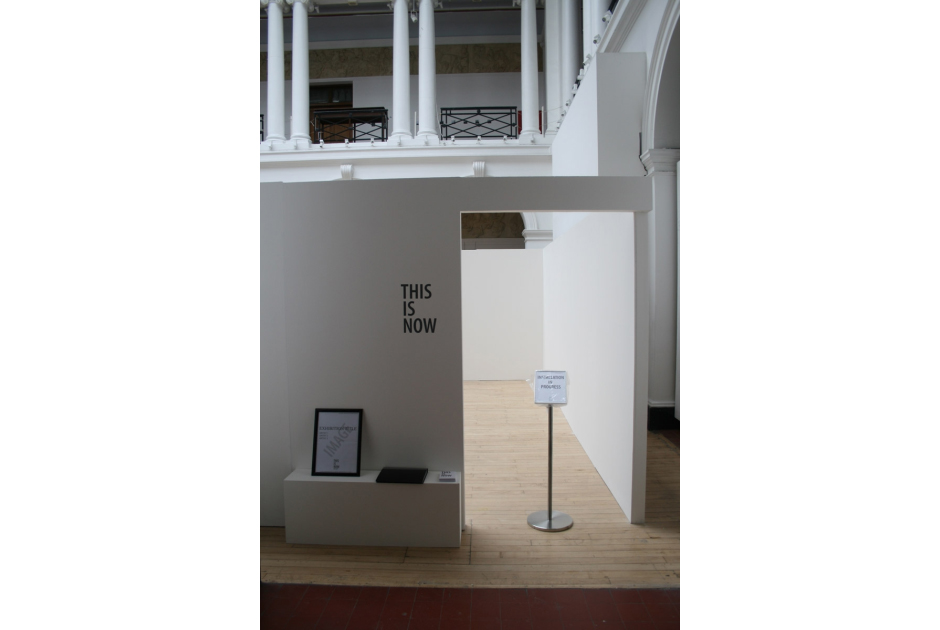 This Is Now
For his degree show at Edinburgh College of Art (MFA Contemporary Art: Practice), Stuart David Fallon produced a series of nine daily exhibitions from 11 to 19 June entitled This is Now. Each exhibition was curated, installed, interpreted, branded and promoted. The project website presented critical accounts of the project, from Rachel Cloughton’s intelligent understanding of its conceptual forebears (such as Victor Burgin’s 'Room', 1970) to Neil Cooper’s eloquent responses to individual exhibitions and the entire project.

Fallon's exhibitions, mostly guest-curated or co-curated by freelance and senior curators, featured a selection of work from the concurrent degree shows of other ECA graduates. His exhibition space, an uncovered, purpose-built, compact room situated on the ground floor of the sculpture gallery of ECA, could be entered or viewed from above. Over the preview period, the space was inhabited only by viewers and an ‘Installation in Progress’ sign.

Exhibitions often were not completely installed until later in a day, but this meant that the ‘now’ of the installation process itself became the exhibition, revealing what is usually hidden from view. The range of work included live performance (as in Pat Fisher’s 'The Stars Sang Last Tuesday', featuring Sarah Hardie), film and video, painting, sculpture, photography, textiles, installation, design and printmaking. Most of the exhibitions played with ideas of temporality, theatricality, performativity, and conversations between objects, as was the case with Lindsay Hanlon’s Act V (featuring Kate Edwards and Manuela De Laborde), Diana A Sykes’s A Conversation (featuring David Fern and Sophie Neury), Kendall Koppe’s to be titled (featuring Edwards, Hannah Knights, and Danielle McNeil), Fallon’s Doubling the Others (featuring Thomas Adam, De Laborde, Knights, Margaret Malcolm) and Laura Simpson’s Sight-Size (featuring Grace Sherrington and Tommy Stuart). Exhibitions also raised questions about, and blurred, institutional and disciplinary boundaries. Francesca Nobilucci’s Most Fit for Purpose (featuring the work of Calvin Laing, McNeil, and Joe Skilton) elegantly transformed a shirt into a sculpture and performance, enmeshed in film and conceptual art.

Occasionally works were placed just outside the space, on a nearby wall or on one of the space’s outside walls, or off-site. In Found Face Down and Other Works, curated by Fallon and Andrew Gannon (featuring Rachel Barron, Patrizio Belcampo, Emma O’Sullivan, Martha Richardson, and Skilton), Richardson’s ‘realigned’ wall panel piece cracked open a wall, the narrow gap a more unsettling gesture than one might expect. Some artists were selected more than once, as were some works, including the headless, footless and castrated plaster cast of Apollo, Edwards’s 'Untitled', and Knights’s film 'Dive'.

This is Now captured time, both the present moment and the passing of time, particularly on the last day, with This is Now/A Grand Tour (curated by Fallon and Ailsa Lochhead). Over the course of the day, the exhibition introduced Megumi Fukae, an artist making work in the space, to timed tours. Fukae’s ‘durational drawing performance’ referenced all the works exhibited in the space, bringing all the past ‘present moments’ into the present. Tour leaders took groups through the building, on the same route, looking at some of the previously selected works and works too unwieldy to be exhibited, but talking about the works in completely different ways, all grand tours in themselves; together, tours and drawing performance operated as a complex institutional critique: a profound, political grand finale to an expertly curated series of exhibitions, nine enthralling days of Now.