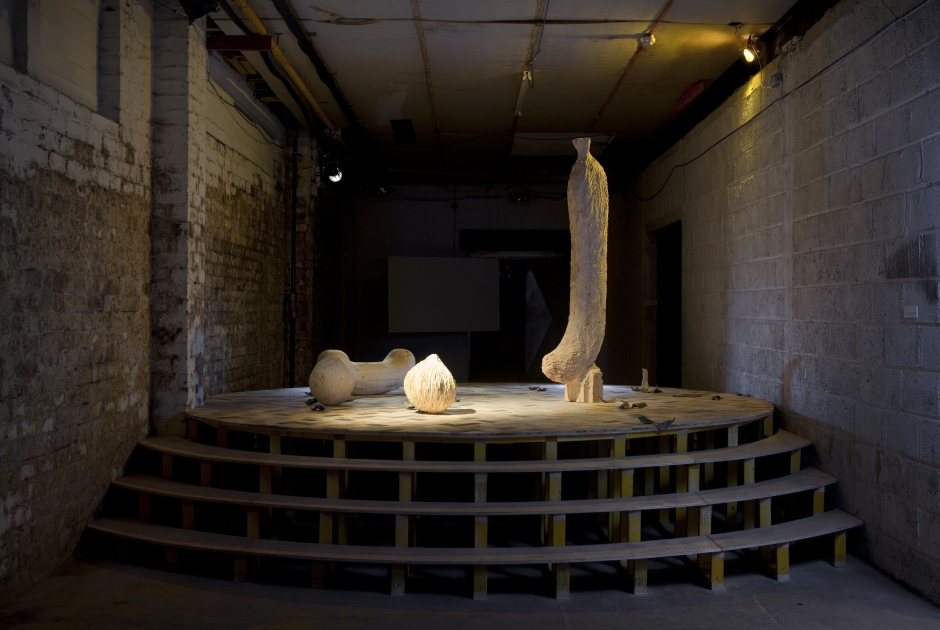 As a strategy to get noticed - to stand out (literally) from your peers, Stephen Murray’s modus operandi was effective and very cheeky. GSofA’s 2013 MFA degree show was held in the striking post-industrial space of the Glue Factory. Murray claimed as his temporary territory an initially unprepossessing thoroughfare within the maze-like layout and, to emphasise the point, urinated all over it. (The artist’s urine, fortifed by Guinness, was an essential component in the patination of the bronze sculptures).

'Common Wealth Games (Fairtrade, 95% Pork, Century Eggs)', 2013, was a hand-built tiered stage on whose parquet floor (laboriously constructed from 2,500 pieces of discarded sheet material) were carved and cast sculptures made from a long list of materials: reclaimed timber and sheet material, re-used oil and gas industry fittings (bronze), urine, glue, fixtures, fittings, MDF, CLS and lights. This podium was an obstruction to the vistors' circulation around the exhibition; they were forced to make a choice by climbing over it and thereby interacting with the art work, or by finding a detour through adjacent rooms in order to bypass it. 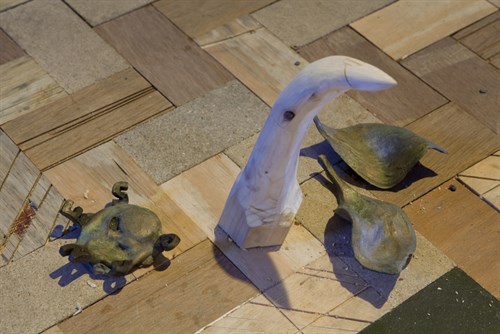 Glasgow will host the Commonwealth Games in 2014 and a high-profile nationwide celebration of 25 years of Scottish contemporary art, Generation, will provide a complement and antidote to all that sport. By entitling his installation 'Common Wealth', Murray is questioning who will really benefit from the much hyped games, preparations for which have seen controversial 'development' of the east end of the city. Murray is not conveniently jumping onto a topical bandwaggon, since as a member of artist collective GANGHUT he was invited to Melbourne in 2006 to participate in the cultural festivities around the Commonwealth Games. He remembers 'how every single bit of graffiti and posters and anything had been removed. What I regard as a lot of the edge or the visible traces of life and lifestyle had been covered in grey and magnolia paint.'

Murray's concern with authenticity and sustainablity is further shown in the bronze 'Century Eggs' which incorporate 'wise words' - DIRTY, TRUTH, AUSTERITY... together with a moral compass the wrong way round and a hand with a third eye in it. The reclaimed timber carvings - a banana, a sausage, an orb and a nut/onion - reference the ethical fairtrade produce he advocates.

Murray is currently working on an 'unofficial” sculptural performance project planned to coincide with the 2014 Games.

Andrea Kusel has been Curator of Art at Paisley Museum and Art Galleries since 1996, where she has curated and commissioned numerous exhibitions including Equals - Celebrating Women’s Creativity (2012) and Decade - ten years of collecting contemporary art (2010). Her contemporary collecting and commisioning for Paisley Museum was recognised by Modern Painters who listed her as one the fifty most exciting art collectors under fifty in 2012. Andrea is Chair of the Board of Street Level Photoworks, Glasgow, a gallery space and members’ organisation committed to fostering public interest and participation in photography. She has degrees in art history, film and television studies, museum studies, and contemporary art and art theory. She is currently an Affiliate Curator in the School of Culture and Creative Arts, University of Glasgow and is on the panel of the Margaret Tait Award to commission artists’ film in association with the Glasgow Film Festival.