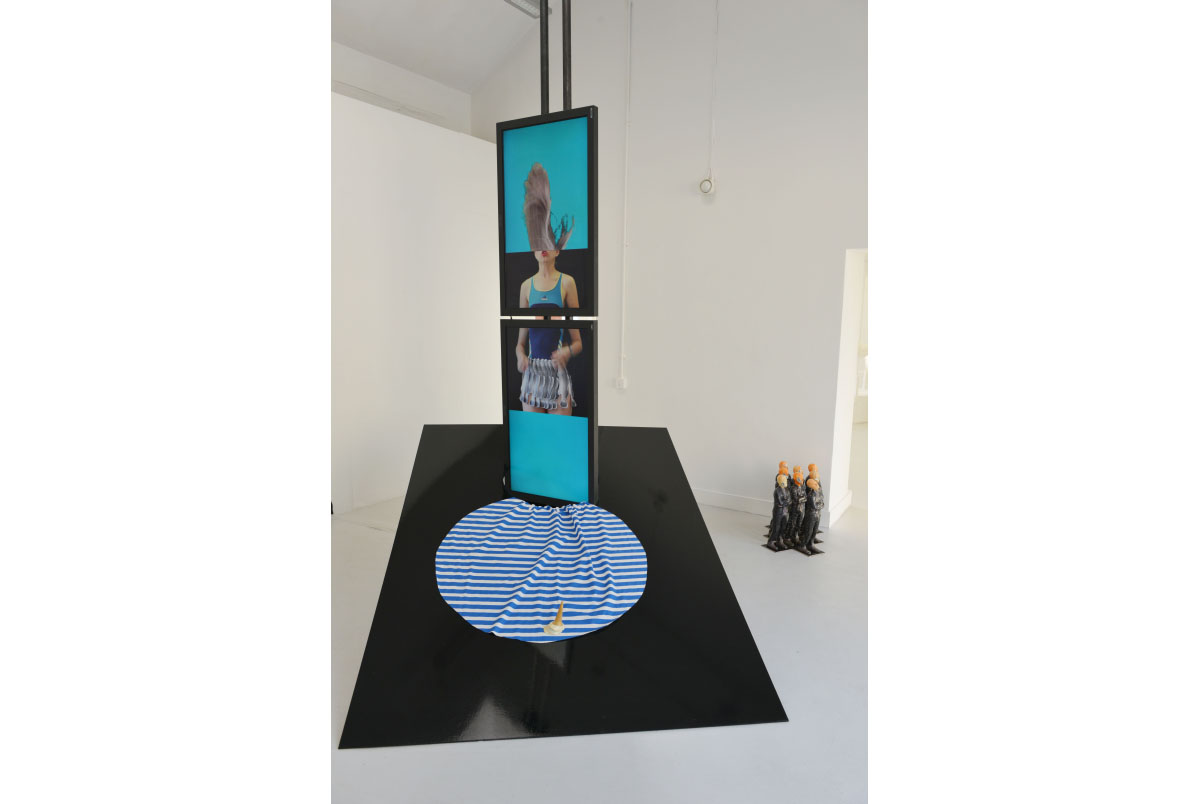 Sisters From Another Mister are a collective comprising Amelia Prazak, Milda Lembertaitė and Michelle Houston, who met in 2010 while studying for their BAs in Performance Design at Central Saint Martins. Their free-wheeling practice employs absurd scenarios, gender play, witty sculptural forms and musical interludes.

At Chelsea they present a jointly authored installation, 'Afterparty' (2014). The central component is a video work, presented on two large flat screen monitors stacked in portrait format and bolted to floor-to–ceiling scaffold poles. The screens show one image that scrolls vertically across them. A female figure in swimsuit stands against a black ground, and around her waist hangs a skirt of paper fish. A member of the Bass family perhaps – as in 'Big Mouth Billy Bass', the novelty wall-mounted rubber singing fish which caused a splash around the turn of the millennium.

The top part of the image is a rich turquoise, which comes down to crop the figure’s head abruptly, just above the mouth. This makes the woman's mouth the focus, her red lipstick contrasting with the more practical swimsuit. The mouth mimes to an Italian song, which turns out to be from the final scene in Rossellini’s Stromboli (1950). This movie starred Ingrid Bergman as a Lithuanian who marries to escape a refugee camp, but ends up in a sort of 'second prison' living on the island. As the mouth sings, a long train of hair shoots upward, superimposed on the turquoise background. Defying gravity, it forms a comic cone-like form, suggesting a world shaken upside down, or imagination taking flight. 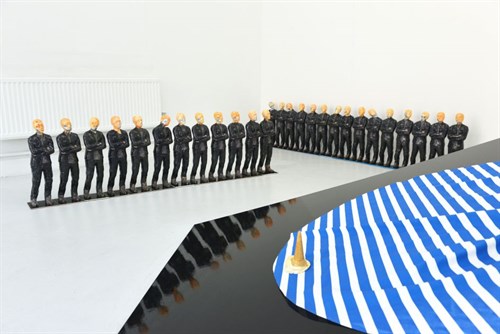 From the bottom of the screen slopes a large sheet of black board covered in a circle of fabric- a second ‘skirt’ for the figure, or a void from which she has risen.  Blue and white striped, and adorned with a trompe-l'œil model of an upturned 99 cone, it emphasises a slightly abject English-seaside, Punch-and-Judy feel to proceedings.  A Sports Direct Siren singing to passing sailors, perhaps.

There are two other elements to the installation. A single channel video on a screen shows two fishy figures on a pebble beach. Writhing and flapping horizontally, they lead you to wonder if are they fully-clothed mermaids, or play-fighting drunken friends. The silver tarpaulin costumes they are wrapped in occasionally pulses with zings of fluro colours added in post-production. The final part is a set of floor-based male figurines, lined up in regimented rows, all dressed in ominous black. This feels more like a curve-ball addition to the mix, probably not needed in the same space. They suggest something militaristic and oppressive, observing the activity from a distance. Sisters From Another Mister offer energetic, rich work which, that while being aesthetically crisp, also leaves meanings distinctly slippery, like melted ice cream on a concrete wall.

Paul Luckraft is a curator based in London, currently employed at Zabludowicz Collection. Recent exhibitions and publication projects include those with artists Lizzie Fitch/Ryan Trecartin, Trisha Baga, Samara Scott, Michael E. Smith, Adriano Costa and Sam Falls. Working with young and emerging artists through a process of curatorial support and collaboration is an ongoing commitment, demonstrated by the curation of the Invites series, which gives artists without gallery representation a chance to make new work for a project space at the Zabludowicz Collection.

Paul previously worked at Modern Art Oxford in the role of Curator and Exhibition Organiser (2010–13) delivering shows by artists such as Friedrich Kunath, Jenny Saville, Abraham Cruzvillegas and Howard Hodgkin. Prior to this Paul was employed at Urbis, Manchester (2008-10), and FACT (Foundation for Art & Creative Technology), Liverpool (2003–2008). After graduating from Liverpool School of Art in 2001, Paul pursued his own art practice before focussing on the establishment of new non-profit spaces in the city. In 2004 he developed a new gallery space within Arena Studios, and in 2005 was one of four founding co-directors of The Royal Standard, an artist-run studio group and gallery space, based for the early part of its life in a former pub in Toxteth.