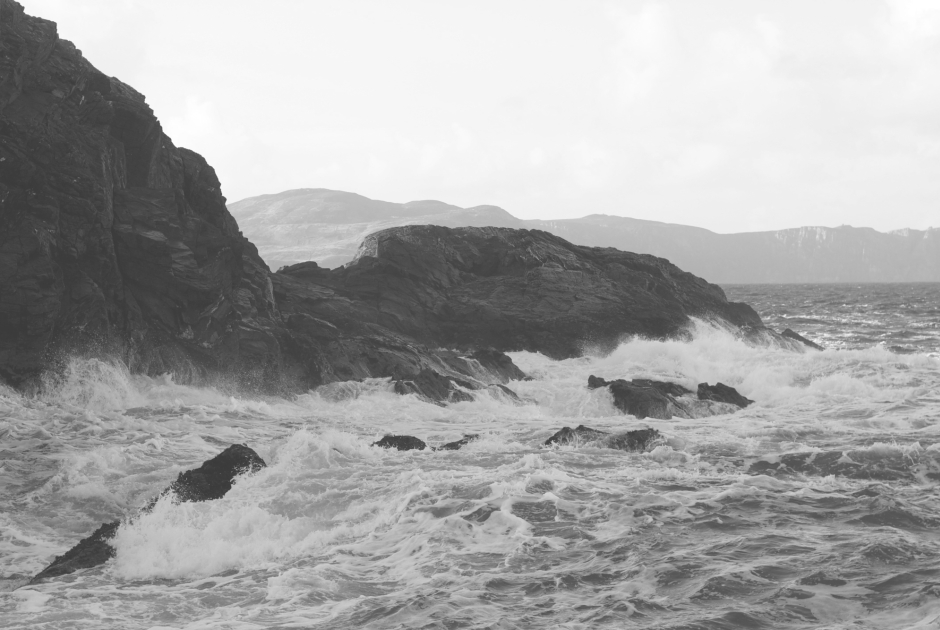 Documentary is a deceptive, manipulative creature, masquerading as fact, reality and truth, or as the 'creative treatment of actuality'. Ryan Moffett’s 'Hood' (2013), shown in a darkened, intimate space at the University of Ulster Master of Fine Art degree show, displays a keen awareness of the subjective and powerful qualities of the (faux) documentary medium.

On a large projected screen a slideshow begins. The soft, Scottish male voiceover narrating in the recognisable, detached National Geographic-esque fashion of the anthropological documentary format adds an aura of authority, believability and weight to the images: stark, monochrome stills of sea, coast, forest, a bucket, a hooded figure; impossible to connect to a definable time or location.

The narrator describes the ceremonies of a tribe that dries mud in caves over winter, takes hallucinogenic substances and eventually sacrifices a young female to drink her blood.

This narrative charges the images. Scenes are revealed that may be situated in the contemporary: rubbish-strewn dens, alleyways with hooded figures. Watery washes of colour creep in.

These scenes are staged – or possibly may not be. Moffett’s practice is characterised by an exploration of this ambiguity –evident also in past works such as 'Ones Who Have Been Told the Ancient Things' – and 'Hood' is a logical development from this.

Movement now: slow-motion footage from the film Black Stallion (formerly King of the Sierras, 1938) of a frenzied white stallion in a mud pit being attacked by a pack of wolves. The animal’s protracted attempts at escape are painful to watch as the pack closes in. The first bite…then darkness.

We observe tribal behaviour with the cold, calculated, disconnected eye of the anthropologist or perhaps the explorer, visiting a group of natives in a distant land. Yet we often operate and behave following tribal codes of conduct in what we call ‘civilised’ society. Moffett taps into something ancient that we attempt to deny, something older and deeper inside: an animal in us all. The images in 'Hood' are dangerous and visceral, and the animal becomes a potent symbol for the type of behaviour that we humans often attempt to mask.

'Hood' successfully explores multiple truths, playing with fact and fiction via a process of layering in order to reveal new meaning. The imagery is rich and seductive, the edit powerful and deliberate.

This work offers the exciting promise of an emerging young artist whose practice has the capacity to continue to intrigue and excite.

Born in Amsterdam in 1986, Alissa Kleist is a curator, artist and writer currently living and working in Belfast. She is co-director/curator and Chair at Catalyst Arts, works for Source Photographic Review, Belfast Exposed Photography, for the Forum for Alternative Belfast and as an independent curator.

She is one of the co-founders/curators of Household–a Belfast-based curatorial collective, and is a founding member of the artist collective PRIME.