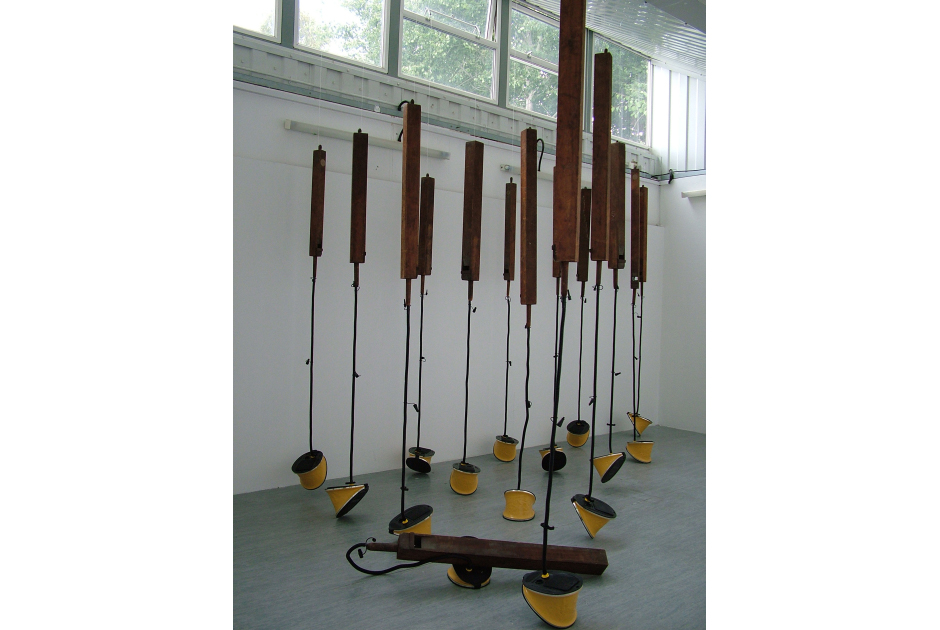 The installation presented in the first studio of the AUB MA show has a strength of presence that belies its fabricated, institutional setting.

Rosemary Edwards has utilised sets of vintage organ pipes in this work but despite the romantic nature of these found objects she has resisted the temptation to be seduced by sentimentality. Instead, 'Scry III' (2013) is a conceptually strong and confident work, with a balanced awareness of sculptural form and aesthetic.

In the centre of the space the viewer is confronted with a legion of suspended wooden organ pipes. Towering above the visitors they are upright and immovable. Their once musical openings have been inlaid with mirrored glass, reflecting back the viewers’ gaze and referencing the 'all seeing nature' implied in the work’s title. Each pipe has been conjoined with a plastic foot pump at its base and the entire space reverberates with a recorded rhythmic audio that replicates the sound of air being pumped through the pipes. 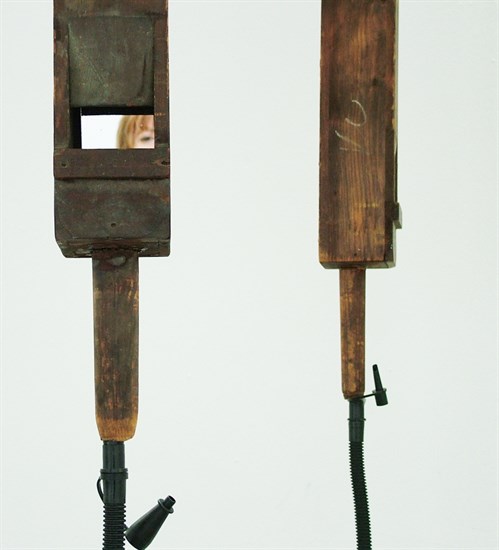 Now akin to sentient beings, these objects have had life breathed afresh into them and stand steadfast in the space, patiently monitoring the visitors like a new breed of pulsing CCTV cameras recording our existence. I can’t quite decide if I find their presence intimidating or reassuring.

On the back wall there are further sculptural arrangements of the wooden pipes. Some are stacked upon each other and supported by wooden frames, while others protrude directly from the wall in small semi-circular arcs. They suggest an abandoned armory and as with the suspended arrangement, a sense of melancholy pervades.

Notions of time, preservation and transformation resonate through the work. Edwards has engineered a new identity for her objects and in doing so created an emotionally arresting installation that conveys both strength and vulnerability.

Chantal Powell lives and works in Southampton, Hampshire. A PhD focusing on the psychology of human relationships informs her work as an artist. Powell's work has been exhibited widely in the UK and internationally, most notably at The Royal West Academy in Bristol, OCCCA in California and in collateral exhibitions at the 53rd and 54th Venice Biennales.

Her artistic practice focusses on materiality and demonstrates a baroque influence with emphasis often on excess and theatricality. Themes and imagery are referenced from literature including J.G. Ballard, Joris-Karl Huysmans’ Against Nature and George Sand’s Journey Into The Crystal.

Powell is currently exhibiting in the major exhibition Victoriana: The Art Of Revival at The Guildhall Art Gallery, London alongside other artists including Paula Rego, Grayson Perry, and Jake & Dinos Chapman.