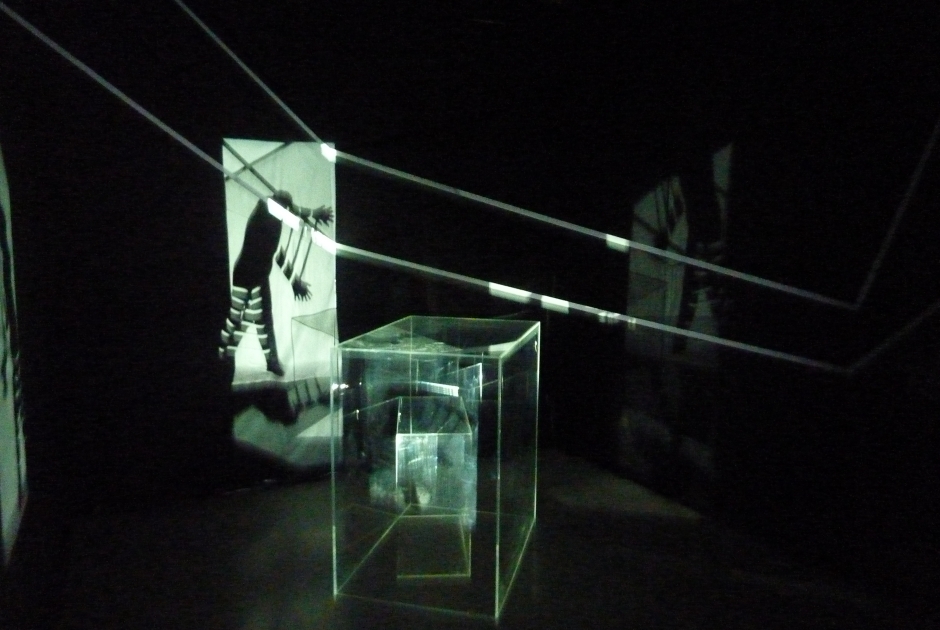 Rose Pickles is the artist I would like to choose from the MA Art and Science course. In my opinion this work stood out as the most visually engaging and developed piece, involving a complicated series of installations. This work seemed to have moved forward from its original idea to stand alone as an artwork, holding a significant dialogue with itself. It was well thought out, using projections and constructions, referencing architecture, animation, op art, kinetic work, optical illusions, traditional French mime and performance, silent film and also black and white film. 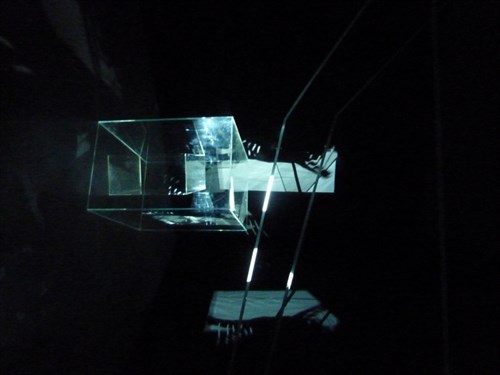 The artist did maths and physics at A level and then went on to complete an BA in architecture and I was interested to note the difference in her approach from fine art students and artists. The work was developed from an investigation into whether performance can be understood through documentation alone. We discussed the idea of audience and the differences between a live one, the audience in the gallery or the audience online. She staged the piece by performing herself, using photographs of the performance, animating them, filming them and then she projected the film into a small specially constructed space. She used a system called ‘beam diffraction’ which is a way of calculating the way that the beam splits on the edge of an object and then multiplying it, creating a flickering array of images. Her system of building the work is different from a fine art approach, and so has a fresh look and in some ways a more contemporary one.

This work resonated through art historical movements making the observer recall many other artworks but none specifically, and yet having an innovative style of its own. It is a good beginning of her career and looked refreshingly different from everything else on the course.

I have an MA fine art gained in 1991 and was a full time artist for 15 years completing 45 group and solo exhibitions.  In 2003 my partner and I designed and had built a house and gallery in the docks in Bristol called ROOM.  The gallery was supported by the Arts Council for 5 years in Bristol and then it moved to London where it opened in Hoxton. It stayed there for a further 5 years before moving to the west end in 2012 into a dilapidated Georgian building near Baker Street for one year.  The work had become much more concerned with its building and location.  We will open again nearby in the autumn.  We have now held 87 exhibitions, performances, films and talks.