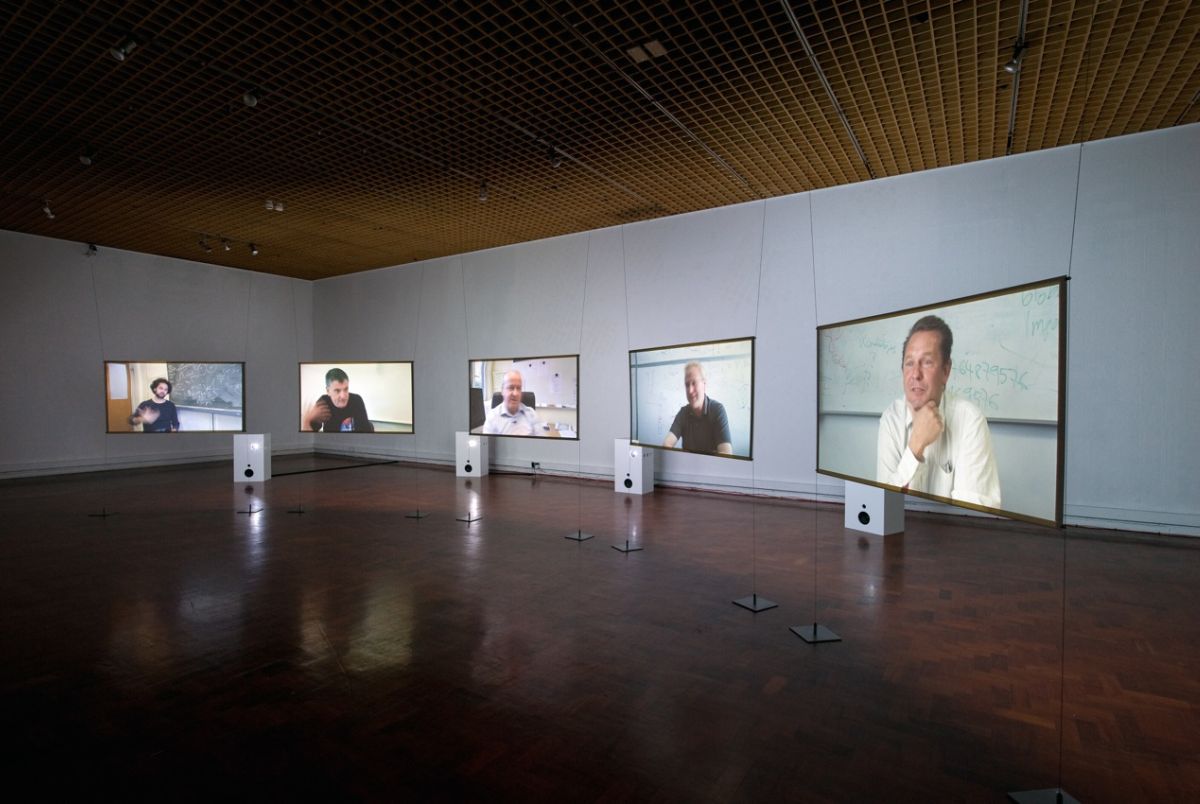 Since 2008, the Large Hadron Collider (LHC) at CERN in Geneva has dominated global news media. Whilst we may have at best a superficial understanding as to the function of this instrument of scientific discovery, the LHC, its corollary the Higgs boson particle and a lexicon of scientific terminology have entered into everyday vocabulary. Such has been the interest that an exhibition entitled Collider, explicitly about CERN, premièred this year at the Science Museum. Why? Because beyond our interest in physics or scientific discovery, we are also hooked by the promise of answers to the fundamental questions about our existence within the universe.

Over the course of the last year, through two periods in-residence, Rosalind McLachlan has actually been to CERN and met the scientists there. Unlike so many who engage in art and science 'collaborations', she therefore has first-hand experience of her subject, knows her limitations and recognises the confines of her understanding. If the CERN project is built around a belief system, constructed around a triangulation between belief in the LHC and the knowledge and understanding it promises to unveil, McLachlan’s research inverts this belief structure. Her MFA show work, 'sub specie aeternitatis', seeks greater understanding not through belief in the knowable, but in asking scientists to address the limitations of their field and forcing them to consider the ‘existential horror’ – the problems of our existence in terms of what we can’t know.

With such big ideas at the fundament of the work, McLachlan’s film installation is by necessity simple. The five-channel video is projected onto an arc of five floating projection screens: each alike in frame, each a talking head, each channel playing in tandem. Whilst at any one moment only a single voice plays, thinking aloud - struggling  to find meaning - collectively all five characters appear to be working together, evolving a visual language of gesture and animated body movement, grasping to find some shared form of resolution. CERN has been celebrated for the way international communities collaborate, put individual agendas aside, and share knowledge and understanding, and the visual simultaneity within McLachlan’s installation captures this collegiate approach.

Importantly, the original interview structure has been cut away to leave only talking heads. Because we don't know what they have been asked, they appear to be engaged in speculative reasoning. In a way they become de-professionalised, and here the signifier of the whiteboard as backdrop – laden with scrawled algorithms – becomes essential: it both reiterates their biographical credentials, and reinforces the alien themes they are being asked to discuss. In place of questions, the film instead employs a series of black screen pauses, in some instances marking the transfer of a thread of conversation from individual to individual and in others a total shift in the subject of discussion. These interventions not only punctuate the film, but also become a poker-like 'tell' that highlight the subjectivity of the edit. Whilst overall the film offers an alternative narrative to the idea of singular scientific fact – to presuppositions of true of false – here McLachlan confesses to her own fallibility, recognising that her alternative narrative is but one of many alternative positions.

Matthew Hearn currently holds the post of Collector Development Manager North East with the Contemporary Art Society. He is also a writer, curator and occasional lecturer. He recently curated a two-part exhibition, RIFF/T for BALTIC’s Project Space, BALTIC39 and in 2010 curated a large-scale group exhibition, Re-make/Re-model for National Glass Centre, Sunderland. Having worked with Locus+ for nearly five years previous, in 2012 he completed a practice-based PhD linked to the Locus+ Archive. As a writer and editor, Matthew has contributed to various magazine and publications and he has written widely around artists practice. He is currently co-developing [i'll be your mirror], a new online platform and events program designed to enhance and support dialogue, discussion and conversation in the arts.