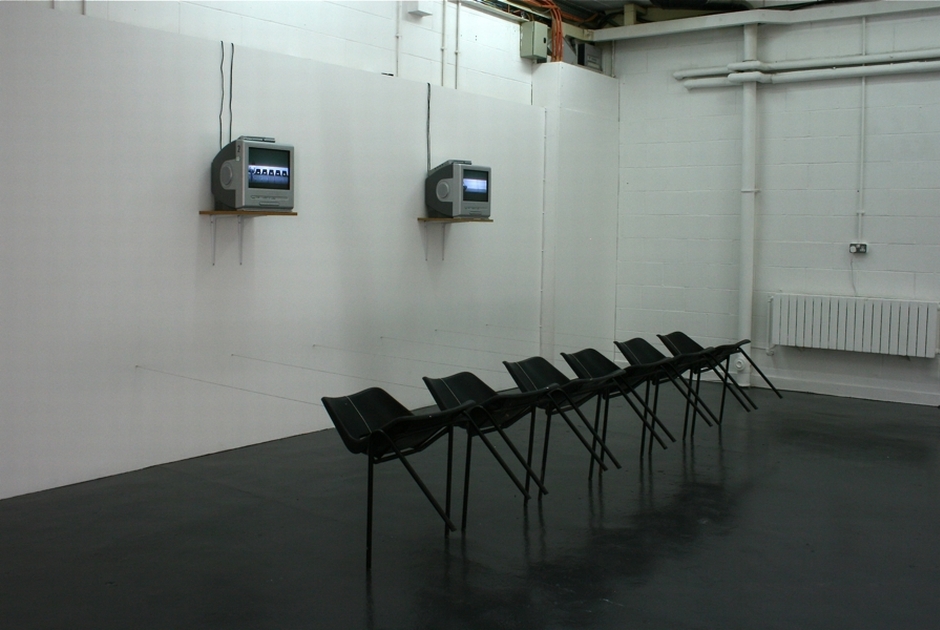 While trawling through the MA Degree show at Wimbledon School of Art this September, Robin Warsany's degree show stood out for its straightforward, no-thrills investigations into the sculptural object and its possible relationship to the body and action.

Warsany's degree show contained two main bodies of work. The first piece, a video/installation, utilised those ubiquitous plastic chairs that can be found in many colleges and other institutions. The chairs have been set up in line in what appears to be the artist's studio. Systematically, the artist sits on the first one and slowly tips it back until he falls backwards. This is then repeated until all the chairs are knocked over. The simple device of setting up objects in the studio and investigating them has very strong resonances with a number of artists working in the early 1970s, such as Bruce Nauman and Paul McCarthy. The camera is simply being used as a recording device, with an austere aesthetic which brings focus and clarity to watching the artist's body interact with the objects. With the repeated action of falling back to the floor, there is also a sense of endurance - less physical and more an ability to tolerate pain – which also brings to mind certain polemic artists of the same period as Nauman and McCarthy, whose work contains elements of physical discomfort and pain.

In a more complex presentation, four monitors sit stacked up together on what looks like an unpainted MDF plinth on its side, which is itself being held up by two steel trestle legs. On each monitor, the artist can be seen interacting with some form of MDF plinth. For example, in a very similar composition to how the work is being presented, an unpainted plinth is on its side being held up by trestle legs. Sticking out of the plinth are the two naked legs of the artist. In a rather absurdist fashion, the legs become part action part sculptural object. This is further played out with use of the plinth, an object that normally holds up and supports 'sculptures' being used as the sculpture itself, highlighting the hierarchy of such objects in our world. For me, there is also a slight underlying sexual undertone to the work. With the wriggling naked legs, I could only think about Vito Acconci's 'Seedbed' (1971) – a work in which the artist masturbated and murmured fantasies to visitors while under a low wooden ramp constructed in a gallery space. In another video, the artist is seen standing, still with the plinth over his body. Where his head would be, a red balloon is being slowly blown up until it gets too big and blows out somewhat comically. While formally the balloon acts as a simple representation or stand-in for the face, the separation between body and sculpture becomes complicated. In a similar way to Rebecca Horn’s body modifications and also some of Franz West's prosthesis-like sculptures, there is an exploration of the relationship between the body, the object and the space in occupies.