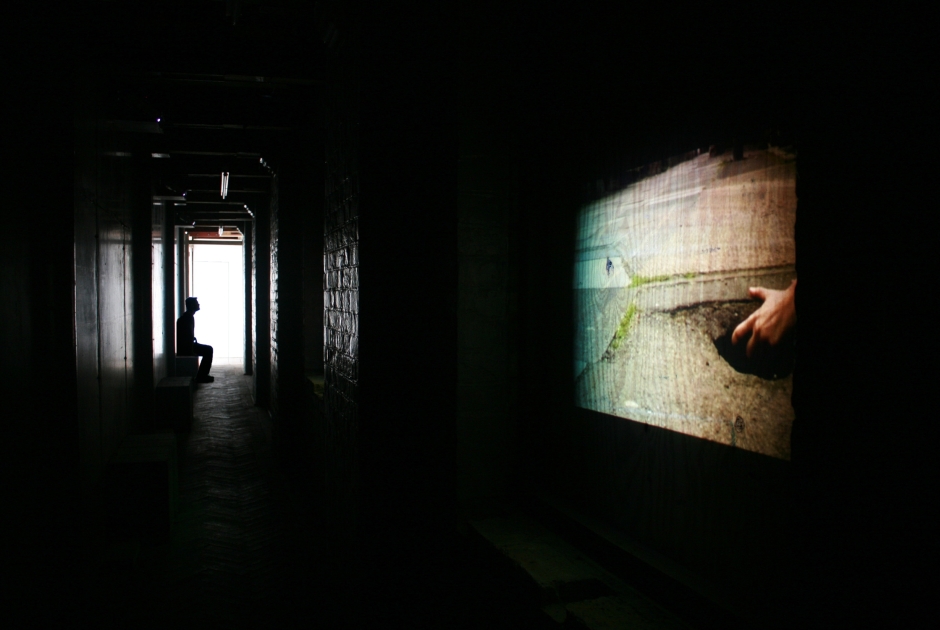 I encountered Mitra Saboury’s work in a derelict corridor of the Laurie Grove Baths at Goldsmiths College. The artist had carved out a discreet space for herself, away from the showier presentations elsewhere. A series of four videos were projected onto plywood with four breezeblocks arranged for seating. In one work, a girl, the artist perhaps, wriggles underneath the distinctive orange armrests of a London Overground train (which is, of course, a central artery for students travelling to New Cross) and lies motionless across a length of seats. Passengers don’t even balk - they just look, linger and then alight the train in a typically London fashion.

Something in the simplicity of the work reminds me of Yvonne Rainer and her experiments with video, particularly in Saboury’s third and fourth projections, which feature a finger probing a pothole in the road and a tongue licking a crack in the pavement. Watching a face pressed against a mottled paving slab, the tongue muscularly testing, tasting, the texture beneath, I thought of the whole canon of artistic analogies between skin and stone; and of an author like Ali Smith, whose protagonist in Hotel World (2001), after hurtling to her death in the opening paragraph, longs for nothing more than ‘To taste. To taste just dust’.

Saboury’s work seems particularly well sited in the Laurie Grove Baths, which were opened in 1898 and belong to a municipal drive at the turn of the nineteenth century to clean South London’s ‘great unwashed’. The context makes these sensual, gritty vignettes feel as substantial as they are slight. Saboury articulates the awkward relationship between the body and the built environment with a dexterity that belies her age and I wish her every success in the future.

Eleanor Nairne is a curator and writer based at Artangel, London, where she looks after The Artangel Collection at Tate. She has previously worked for Whitechapel Art Gallery and Barbican Art Gallery and in 2011 was the curator of Making a Scene at Southampton City Art Gallery. She is a regular writer for Frieze and has contributed essays to catalogues such as Self Portrait (2012) at the Louisiana Museum of Modern Art, Denmark, and was the editor of Yael Bartana: And Europe Will Be Stunned (2012). She presented the Your Paintings series for BBC2 in 2012 and in 2013 was made the Jerwood Visual Arts Writer in Residence.