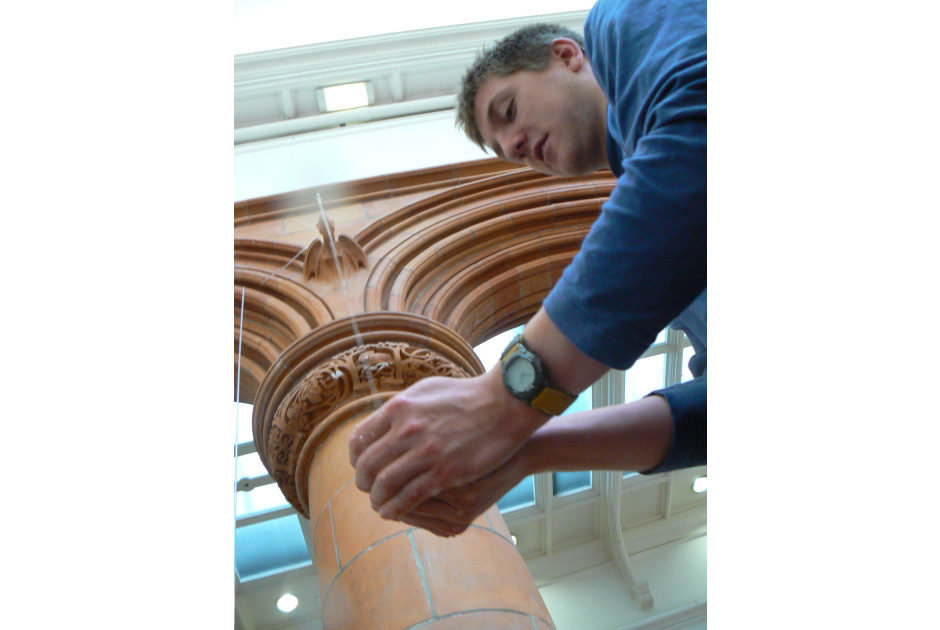 Mike Ferguson develops his work by experimenting and playing with the objects in his immediate surrounding and transforming their function through physical or technical manipulation. Ferguson's energy fused 'Forklift' is a video installation consisting of three monitors assembled one on top of the other. The footage on each monitor depicts the artist navigating a labyrinth runway in his studio made from tables that have been turned on their sides. Each monitor features the performative action from multiple viewpoints. The first from two different positions within the studio space occasionally capturing the artist as he zooms past the camera; the second is attached by a pole to the forklift and points down from above and the third is attached to the base of the forklift and points towards the edge of the runway.

'Gargoyle', more subtle than 'Forklift', is integrated into the fabric of the gallery architecture. After remodelling a broken gargoyle, a hose from a bin filled with water is fed up to it producing a fountain of water from its mouth collapsing from a great height back into the bin below.

Earlier works include a motorised revolving, belted blackboard with an arm and a piece of chalk attached to the side of it. It marks the blackboard continuously with a long vertical line down the left side. As the chalk marks become thicker it eventually smudges out its previous markings. In 'The Beast', Ferguson has welded together four windscreen wiper arms and motorised them at each joint. When switched on they swing violently in different directions with an animated primitive quality that, when held by the artist becomes a challenging wrestle; a potentially dangerous object that only the looping of the video can tame.

Ferguson's work is developed out of a curiosity of the objects' peculiarity or through a frustration with their in-animity not to perform what his imagination expects of them. His work oscillates between the humorous, the primitive, the self-destructive and perhaps an urge to challenge the conventions and boundaries of art.