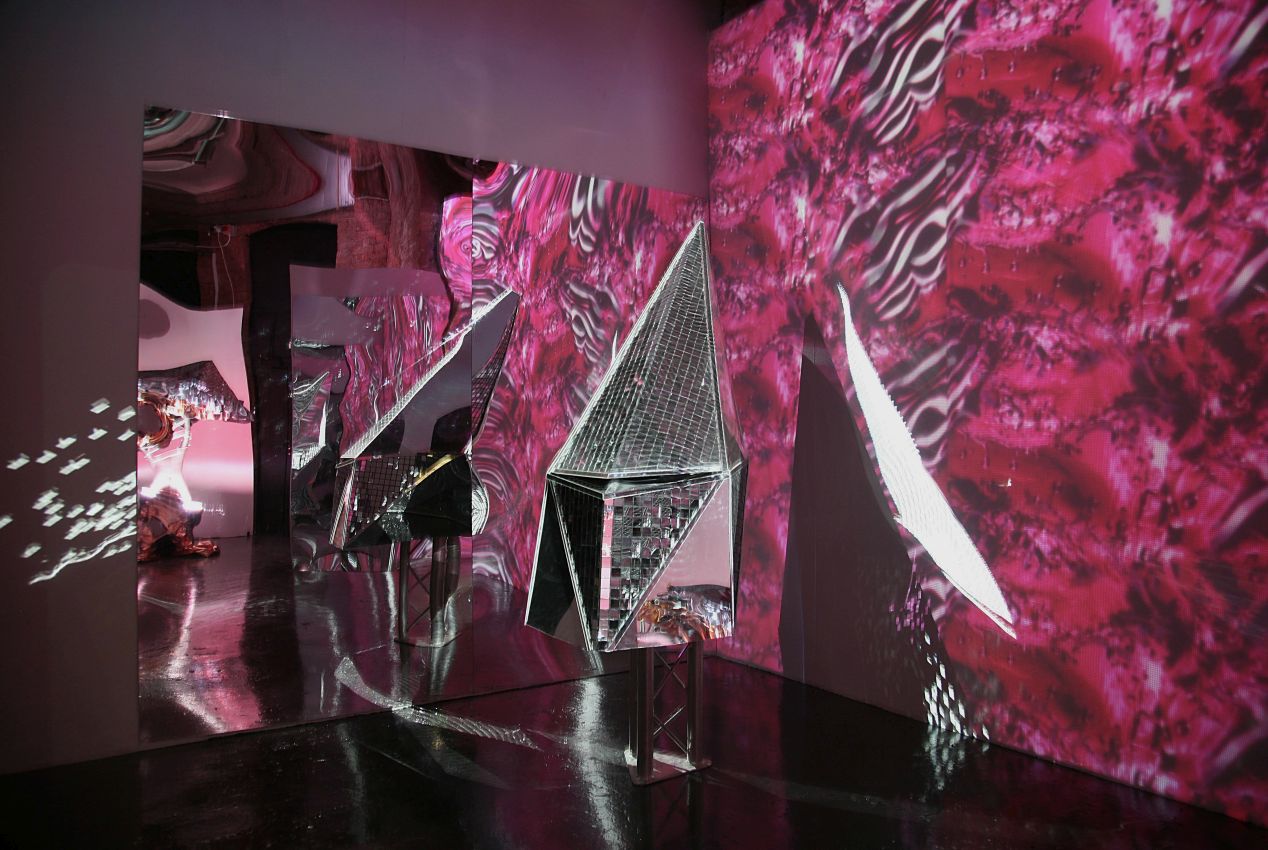 Stepping gingerly through a black curtain, we plunge into darkness and enter the 'Pleasure Prison'. A burly bouncer, arms crossed, stares you down, blinking rarely as though a sleepy sentry guarding the gates of Hades. The whirling drone of drum and base pounds whilst cascading light beams rebound: heady, throbbing disorientation.

Without warning Megan Broadmeadow tequila-slams us head first into a dystopic, neo-medieval nightclub.

A mirror maze unfolds, fringed with yards of metallic ruffs and Doric columns. At its heart is the video 'The Amen Beat'. A masked harlequin in gold jumpsuit caresses miniature mirror balls so tightly they bleed. Chequered-legged flamingo harlequins dance with jewelled jaws, oscillating to the pounding base. 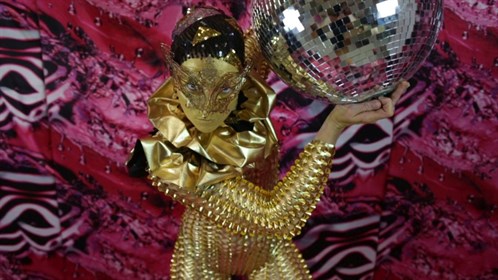 'Scintillate Flash Back' is an oversized rotating knight's helmet like you’d get on the 80s ITV classic Knightmare, but this time it's on speed, covered in hundreds of mirror tiles and the promulgator of the omnipotent mirrored light. The helmet refracts sophisticated backdrop projections: neon, chequer and zebra prints rebound, bouncing off the matt black floor.

In 'Festal' we meet another futuristic helmet, but this time it is reified, complete with its own ruff and shiny pantaloons. The only human signifier in this bizarre configuration is a tighted leg, the rest of the body camouflaged by a wash of gold and silver frill. The portrait is projected from the mouth of the helmet. The space is infinite and disconcerting. 'Anaglyph 3D' is perhaps the trippiest part of the installation, a subtle Pepper's ghost illusion peeps through an alcove. A large diamond floats in the air for mere seconds, then disappears: a trick of the light, a fleeting glimpse of a magic-eye puzzle.

Broadmeadow’s powerful aesthetic and all-encompassing methodology (referencing Maximalism, Fetishism and ritual amongst so much more) has close connections to contemporaries including Plastic Fantastique, Nathaniel Mellors, Marvin Gaye Chetwynd, John Walter and Bedwyr Williams, whose recent work 'Echt' (2014) also uses the dystopic nightclub of the future as its setting for an uneasy cautionary tale.

The staggering length Megan has gone to to overthrow the normally prosaic degree show format here is thrilling. I want to see so much more of this, and soon.

Judith Carlton is Assistant Director at Matt's Gallery, London were she has produced various large-scale installations and exhibitions by some of the world's most recognised contemporary artists including Susan Hiller, Mike Nelson, Benedict Drew, Willie Doherty, Lindsay Seers and Nathaniel Mellors.

Matt's Gallery is a non-profit Arts Council National Portfolio Organisation established in 1979 as a space to provide the time, support and resources for artists at all stages of their careers to take risks and challenge their own intentions.

Judith has worked at public institutions including The Serpentine Gallery, Cubitt Gallery & Studios and The Hatton Gallery, Newcastle. She has MAs in Philosophy & English Literature from The University of Edinburgh and Gallery & Museum Studies from the University of Newcastle and is an advisor to independent gallery Space in Between, London.