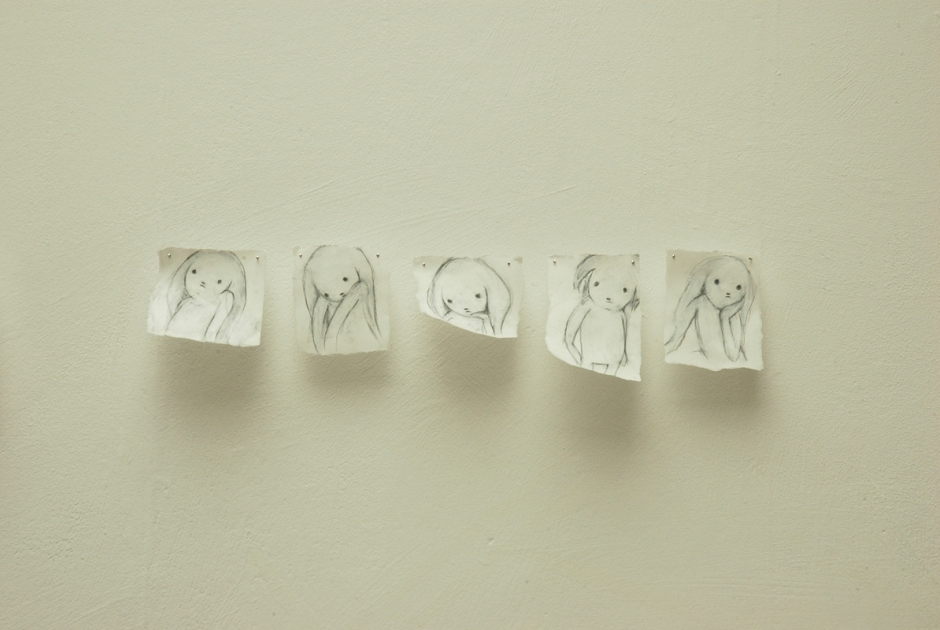 Maiko Kobayashi's artwork is expressed in drawings and paintings of an un-named character. It is a creature which is repeated over and again in her drawings and paintings. It is a simple being, appearing to be like an animal with a child-like face, but it is able to offer facial expressions which belie a deep emotional response to an unseen world.

The repetition of this character in this work is a process that draws on the spectrum of emotional expression. Kobayashi's MA exhibition consists of rows of small fragile drawings pinned close to the wall so that the paper hangs half loosely, and each drawing makes a shadow against the wall. Each single drawing contains a single portrait of Kobayashi's character and together they form a kind of emotional diary in their horizontal line along the wall.

In the second room of the installation is a large scale piece that was inspired by a visit to Auschwitz. Here the characters sit close to each other, gazing out of the image, close enough to comfort each other though perhaps not aware of each other. They have a ghost-like quality, and in their similarity it is not clear whether they are the one or many.

This work has a quietness that highlights the vulnerability of the character in the images. The images work in a comic like style and this familiar mode gives us a framework for approaching the work, in that the cuteness of the character is a way of accessing the emotions contained in the drawings. There is though, an uncomfortable silence in the face of so many renditions of this character's sadness, when the first impression is that we are about to encounter a simple endearing creature. There is a need to develop our own narrative to explain what the creature is feeling, but the newspapers that some of the creatures are drawn on only hint at a likely predicament.