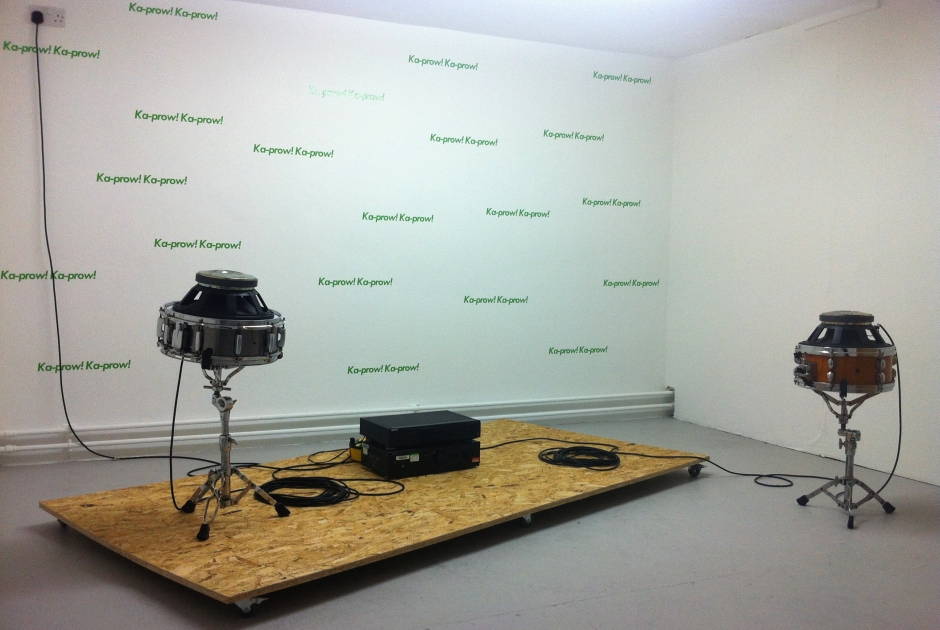 I was aware of Liam Jolly's work before I had even reached the space in which it was installed. From the corridor and adjacent space a muffled but recognisable snare drum was beating in an automated and simple rhythm.

Final year shows almost always happen in the college’s studios, a lick of paint on the walls, perhaps the floor too and hey presto – it’s an exhibition space – but the sense of these spaces as working studios is never obliterated for me.

As I opened the door on Liam Jolly’s installation, the bright red carpet covered with various piles of merchandise completely transported me.

There were hundreds of mugs stacked up, boxes of unopened t-shirts and perhaps most puzzlingly a single framed print still in its bubble wrap resting on the floor. Was this a stock room, a pop up shop? The mugs, t-shirts and print all carried the same printed red words in a fairly generic font. 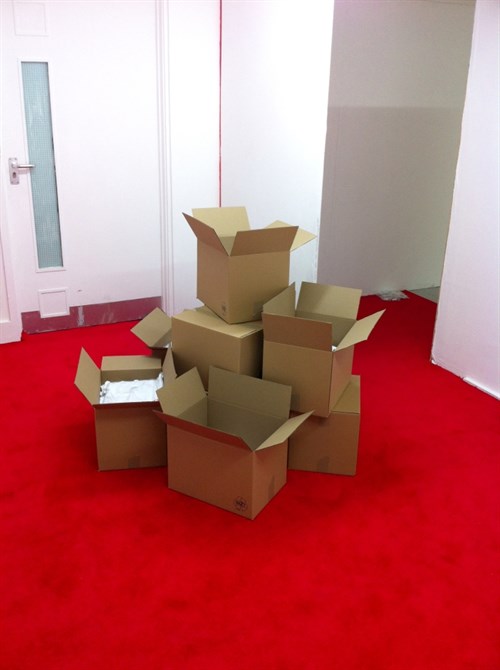 Was this simply the artist’s route from home into college, or some kind of reference to place? The directions assume a starting point which the visitors to the show are to ‘head southwest’ from, and arrive ‘here’. Suggesting a centre and a destination, London and Falmouth perhaps?

The source of the drumming, louder now, is not revealed until you move into the second room, where one is confronted by two cone-shaped speakers resting, face down, on two snare drums. The speakers, attached to an amplifier, are presumably generating a beat of some nature that resonates with the drums snare and appears to be playing the drum. Behind the drums the words ‘Ka-prow! Ka-prow!’ are repeatedly typeset across the wall in green, presumably an onomatopoeic imitation of the sound played through the drums. Two successive beats on one drum followed by the same two beats on the second drum – ‘Ka-prow!, Ka-prow!’ indeed.

Later as I left the building and walked back to my car, I passed a window boarded up from the inside. Installed in the void were a few of those mugs, some coat hangers and that now unmistakable red carpet. I had seen this insignificant arrangement on the way in but now it all meant so much more. I had been aware of Liam Jolly’s work even earlier than I first thought.

Liam Jolly’s work uses simple but effective devices to surprise and engage its audience. The question is whether it can linger and stand the test of time. My answer came more than a week later when I suddenly realised there was something odd about the spelling of the onomatopoeia 'Ka-prow!'. Of course - this was a reference to the performance artist Allan Kaprow. I look forward to the other unexplained elements of Jolly’s installation unfolding in the weeks to come.

Andy Harper is an artist based in St. Just, Cornwall. He is represented by Morgen Contemporary in Berlin, The Page Gallery in Seoul and Danese in New York.

Andy Harper has exhibitions coming up in Bern (Galerie Bernhard Bischoff & Partner, Jan 2012) and New York (Danese, March 2012). Announced as the winner of the Latitude Contemporary Art Prize 2011, Harper is now working on a major commission for the 2012 Latitude Festival, Southwold, UK.

Andy Harper co-founded Assembly with Abigail Reynolds. Based in a converted Wesleyan Chapel in St Just, West Cornwall, Assembly promotes dialogue. The space is used in a variety of ways, including seminars, talks and residenciAndy Harper teaches Fine Art on the MA programme at Goldsmiths College, London.