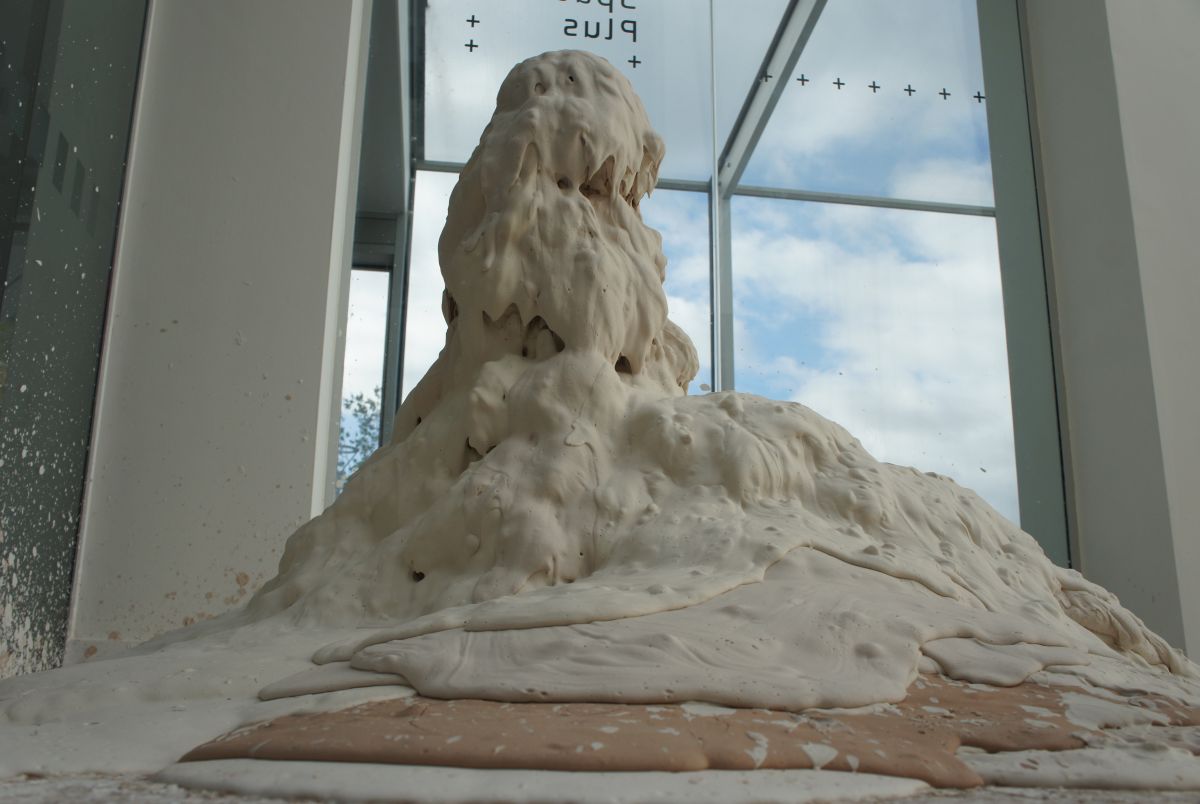 Someone has been making an unholy mess in the University of Lincoln’s flagship new Art and Design building. Plaster is splattered up the glass windows overlooking the landscaped turf of the Brayford Pool campus, home of the new Project Space Plus Gallery. Within, bags of plaster spill out onto the floor, and the resultant dust is trampled through the corridors. At points throughout the gallery, joyous mounds of solidified plaster rise from the floor. A workbench sits unattended surrounded by various mixing bowls and apparatus, and nearby rests an abandoned pair of shoes. This chaotic scene is the work of Laura Johnson.

There seems to have been much talk recently about a ‘return to making’. It’s a vague mantra, which - to the disdain of those who had hoped it might herald a new appreciation of artistic skill - appears to have inspired artists to become excited once more by the essential act of creation. It would seem that within our digitally saturated world, the experience of their own hands working with ‘real’ materials - and its embodiment in the objects they make - is becoming all the more important. This has led to a wave of grotesque ceramics, crude paintings-on-cardboard and anarchic assemblages being produced by emerging contemporary artists, as they veer away from traditional artistry, adopting instead a raw, rough-and-ready approach. 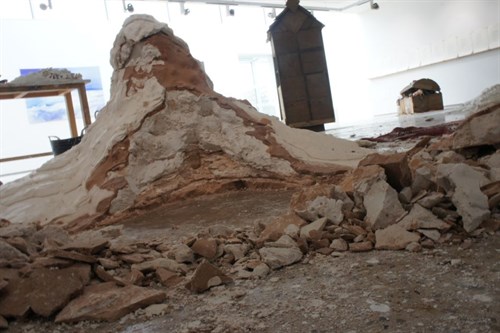 In the most primal way Laura’s work aligns itself with this engagement with material and the base act of creation. The process is simple: plaster and water are mixed and poured onto the floor; then the process is repeated. The ‘performance’ takes place daily within the gallery space for the duration of the exhibition.

Laura herself talks of the importance of the process of transformation of materials and the state of ‘formlessness’ that material passes through when transformed by artistic intervention. This is a transient state, for in time the natural properties of the materials themselves once more take control and form the basis of her sculptural works. The title of the work, 'Ousia' (an Ancient Greek noun often translated as essence but more analogous to the English participle being) hints at her attempts to negotiate the alliances between material and action.

The distilled nature of the act does nothing to dilute the visceral impact of the resulting work on the viewer, or disguise the bravery required to create it. As unwitting students and visitors traipse the detritus of her works through the building, the courage of the institution to host such mayhem without seeking to control it also increasingly demands our respect.

Dominic Mason is an artist and curator based in Sheffield and Scunthorpe. He is Exhibitions Officer at 20-21 Visual Arts Centre and Co-director of Bloc Projects, an independent gallery space that works with emerging artists. He is a former co-director of Art Sheffield/ Sheffield Contemporary Art Forum and previously worked for Museums Sheffield, as well as with independent projects including S1 Artspace and collaborative artist group Interstellar. As an artist he has been involved in numerous projects, including exhibitions, commissions and residencies at galleries including East Street Arts, Ceri Hand Gallery, S1 Artspace, South Square Gallery and the Nástupište 1-12 space in Slovakia.