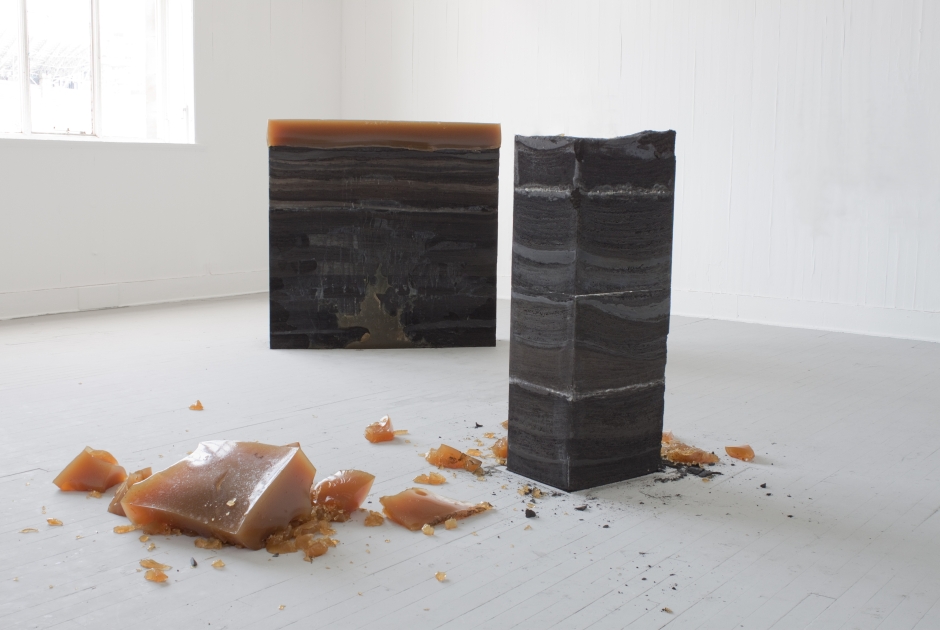 The last room of the ECA Edinburgh College of Art’s MFA Contemporary Art: Practice degree show was by far the most powerful. Framed by dramatic views of Edinburgh Castle crowning its outcrop of a site, and surrounded by atmospheric photographs of Scottish coastlines by Iain Sutherland, Kim W. Wilson’s black, white and amber sculptures entitled 'unbecoming' (2012) mirrored the colours and forms of the castle and outcrop. Originally made as two rectangular blocks of compressed layers of peat ash with a thinner layer of bovine gelatin on top, the sculptures took on a life and form of their own once released from their shuttering or formwork, the structure in which the materials were cast.

The sculptures themselves are a pair, both made the same way and with the same materials, but with different consequences. One of the sculptures is upright, a monumental presence, with impossibly clean edges for such unwieldy materials. When the other sculpture was set in place and released from its shuttering, however, the gelatin layer toppled and collapsed, splattering into several fleshy chunks and bits when it hit the floor. Together the sculptures look like form and anti-form, a kind of before and after, one solid and clean and the other uncontainable. Anthropomorphic and psychoanalytic associations aside, the works have such an intensely visceral quality partly because of the materials she uses and partly because we see the materials tamed and released. 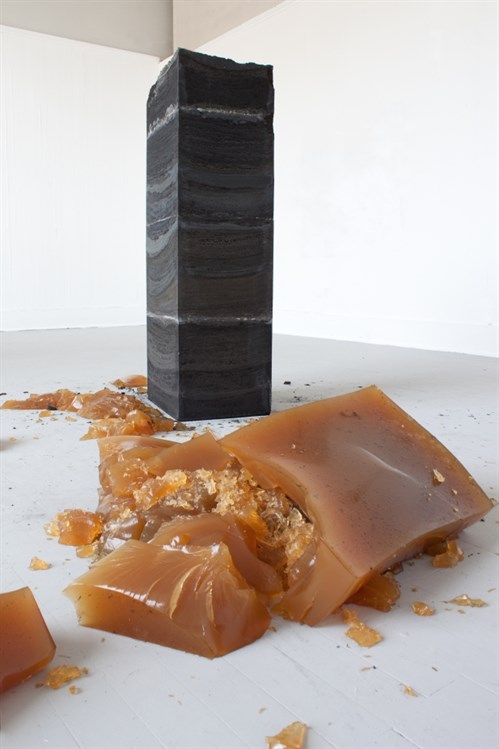 Wilson works with wool grease, peat and bone ash, lard and gelatin because they have as she suggests 'their own pre-histories and histories of transformation both natural and industrial'. Her ideas are grounded in writings on nature and culture by the philosopher Elizabeth Grosz (on Charles Darwin) and the anthropologist Tim Ingold. She is interested in the entanglements of cultural and natural processes, and time and duration. The work 'unbecoming' is a way of bringing earth and human, land and the body together.

Wilson is interested in these materials not only for what they signify, but also for their visual and physical properties. The physical labour involved in making the work is arduous. For these works, she compressed layers of peat ash inside a shuttering and poured in a layer of gelatin on top. Her description of a moment in making the work gives a sense of the process: '[…]for a while I have to rely on the shifts in sound of the tamper on the surface; the initial wet loose slush as it slops in through to the dulling thud as the water soaks into the layers below pulling the top ash in.' 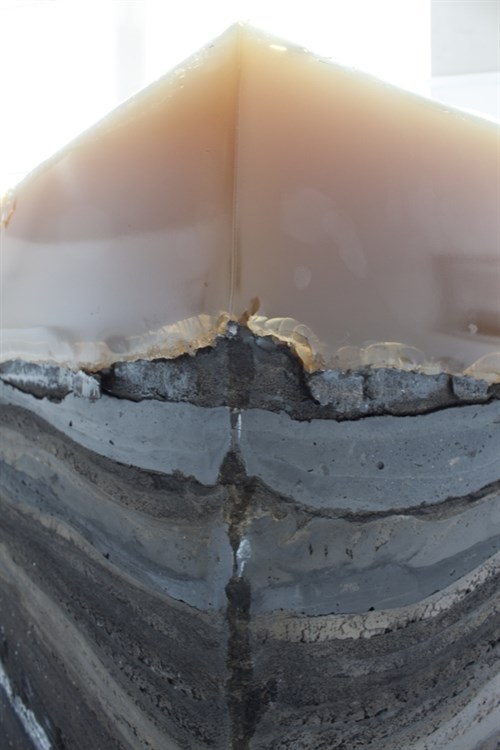 Wilson's work is redolent of Rachel Whiteread's cast sculptures and Karla Black's cake works, and she shares with Black the challenges of imposing form on uncontrollable, sometimes immaterial materials, but conceptually and visually her work inhabits an entirely different world. It is archaeological: contemporary and pre-historic, gut-wrenchingly unsettling and spellbinding.

Stacy Boldrick is Research and Interpretation Manager at The Fruitmarket Gallery, where she is responsible for programming talks and seminars and for writing and producing interpretative materials for exhibitions.

After completing an MA at the University of Pittsburgh and a PhD in History of Art at the University of Manchester, Stacy was Research Co-ordinator for the Henry Moore Institute in Leeds, where she curated Homes for the Soul: Micro-architecture in Medieval and Contemporary Art and, with David Park and Paul Williamson, she curated Wonder: Painted Sculpture from Medieval England. From 2002 to 2007, Stacy co-ordinated research projects between institutional partners in VARIE (Visual Arts Research Institute Edinburgh) and was an occasional lecturer at the University of Edinburgh. With Richard Clay she edited Iconoclasm: Contested Objects, Contested Terms (Ashgate, 2007). Stacy is an Honorary Fellow in History of Art at the University of Edinburgh, and writes about medieval and contemporary art.