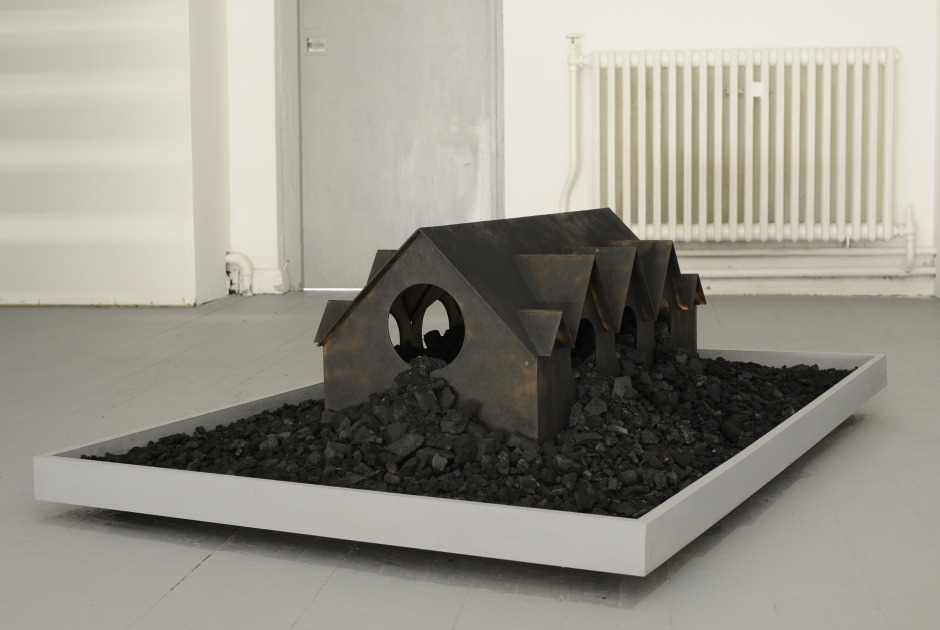 In making his 'Last Paintings', Ad Reinhardt, like Malevich before him, pursued pure absence as an attempt to contain ultimate presence. On viewing Jamie Lau's 'The Tempest' (2012) and 'Back into the Black' (2012), I was reminded of Reinhardt's quest, to challenge accepted signifiers in order to represent transcendental fullness: ''Black... beyond virtues, inscrutable, indescribable…. All distinctions disappear in darkness. The darkness is the brilliance numinous, resonance.'

Lau's 'Back into the Black' takes the form of a church damaged by the earthquake in New Zealand in 2011. Sculpted from burnt wood and coal, the work presents a building which is empty, hollow, and on the verge of collapse. Lau's development of 'Back into the Black' was informed by the 'Temple of Death', an unrealised project by the visionary French architect Étienne-Louis Boullée. The Temple of Death, sunk into the ground, was to operate as if a photographic negative, an architectural void, creating a space so black and dark that when you entered into it you wouldn't be able to tell what were walls, floors, or even your own flesh. A metaphysical and literal consumption of all that entered.

This juxtaposition of dark and light continues in 'The Tempest', a tall structure consisting of a series of mirrored acrylic and burned wooden struts, illuminated upwards by four fluorescent strip lights. Referencing Shakespeare's The Tempest the work creates a structure which is simultaneously outside and inside, a shelter that provides no answer to the prevailing conditions. Like Reinhardt, Lau seems interested in pure colour (or the absence of pure colour) and form and its relationship to existential uncertainty. However whereas Reinhardt's Methodist upbringing envisaged a process of spiritual discovery, Lau presents a sense of unknowing and anxiety, an intellectual and psychological abyss, which he connects to a sense of mortality. It is not an all-prevailing power that is transfixed within the structure of 'The Tempest', but a kind of formal agnosticism. 'The Tempest' is a sculpture that is governed by distinct rules, which is strong and self-contained, but which ultimately offers no protection. 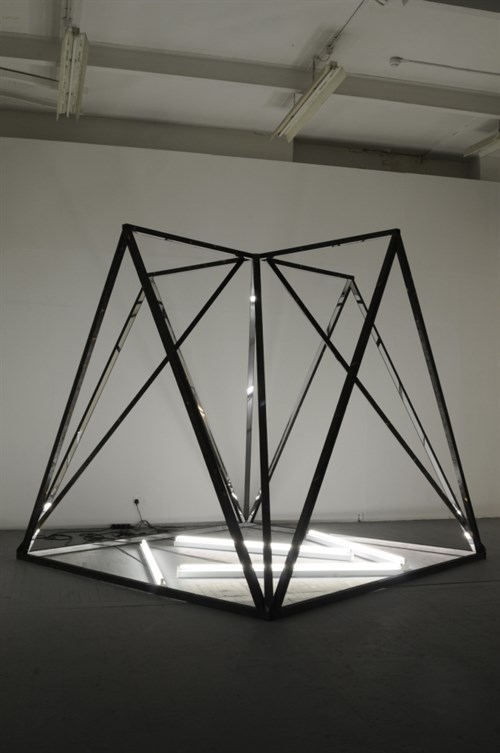 Lau's work is an anomaly. Although contemporary, it closely relates to both the transcendental abstraction practised by artists such as Malevich, Reinhardt and Barnett Newman and the minimalism or literalism of Judd, Flavin or Stella. The work forces the viewer into a spatial response to its staged solemnitude, echoing and playing up to Michael Fried's criticism of the 'theatricality' of minimalism. In the context of the graduate show it is usual to see artworks that resemble the work normally seen in the pages of Art Forum or Frieze, or recent shows within large London institutions. In this context Lau's work stands out. The artist boldly offers a thought-provoking debate on the eternal constants of human existence and the indeterminable meeting point between endings and beginnings.

After finishing an MA at Staffordshire University in 2005 I was elected Chairman of the Conjunction Group, an artist-led curatorial organisation which generates opportunities for artists in the West Midlands. During this time I toured the UK in order to promote the region, and help facilitate opportunities for Staffordshire based artists in cities outside of the immediate area.

In 2006 I co-curated Conjunction 06 with David Bethell, and Andrew Branscombe, an exhibition taking place at four venues in London, Birmingham and Stoke-on-Trent almost simultaneously. The exhibition sought to transcend physical distance to realise one group show in three cities, questioning the values assigned to place, and the status of gallery or non-gallery venues.

Conjunction 06 involved 49 artists from across the UK, and ranged from recent graduates to established professionals such as Martin Creed, and Doug Fishbone. The success of the exhibition helped lead to the establishment of the Air Space gallery, Stoke-on-Trent's first platform for contemporary art.

Towards the end of 2006 I moved back to London and established Matt Roberts Arts, a not-for-profit curatorial organisation dedicated to linking up with graduates across the UK and offering them opportunities in new locations. Matt Roberts Arts manages an ongoing national and international programme of exhibitions and events, furthering the reputation of early to mid-career British artists, and at the same time offering free arts management training to recent graduates.

Recent exhibitions include Unheimlich (Leeds Met Gallery, April-May 2008), Quixotic Vision (Dollinger Art Project, Tel-Aviv , November - December 2007) and Salon 07 (Seven-Seven Contemporary, July 2007). As an organisation we have an ongoing interest in the relationship between the 'uncanny' and the art object, and this wll lead to further symposia and exhibitions in 2009.

Outside of curatorship, and project management Matt Roberts has also contributed to A-N magazine, Contemporary, art art art and Axis, as well as lecturing on the MFA at Bezazel, Tel Aviv, Wimbledon College of Art, and Camberwell College of Art.