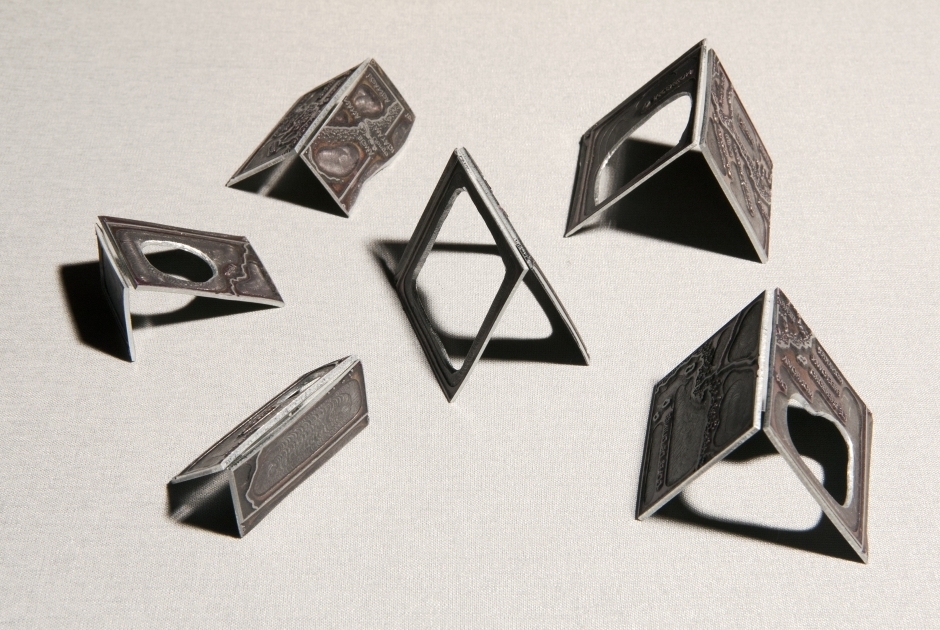 'Pattern' (2012) comprises a single page of old graph paper, dirty from years of use. The page holds what seems to be a pattern for a textile or brickwork design – geometric flowers on a checked background – reminiscent of another era. However, instead of the design neatly stopping at the edge of the square tile as you might expect, the flowers continue to blossom beyond the intended outline, suggesting its endless repetition. It appears that the thick poster paint used to create the original design has been diluted to allow the pigment to be reused – giving it new life and extending its reach with the most economical means, in keeping with the period that it references. 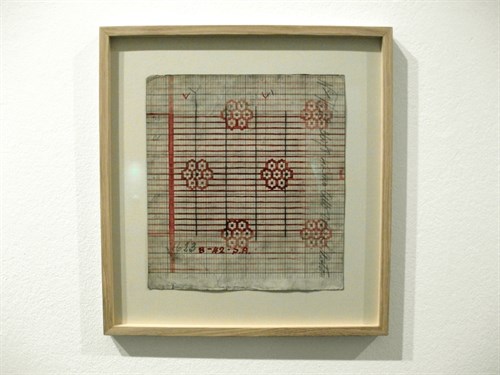 'Plates' (2012) consists of a pair of photographs of a collection of small metal objects. The objects resemble hinges, but don’t appear to be functional in any way and large sections have been removed as if they have been adapted for an alternative purpose at some stage in their life. Arranged across the page like minimal sculptures, their form is described by the shadows that surround them, but provides no information as to their possible use or making. Each piece is etched with what looks like a map, and it is only this tiny detail, and the title 'Plates', that provide any information about their past, or indication of their scale. The individual pieces look as if they might fit together to make a larger image, crossed with lines of latitude and longitude, referencing a heritage of exploration and colonisation.

'Untitled' (2011) is similarly abstruse, and apparently unrelated. A seemingly static image on a flatscreen monitor shows an image of a crystalline structure very slowly ‘melting’ in front of our eyes. Filmed against a monochrome backdrop that removes any tangible context, it is almost impossible to tell the scale of the object we are presented with and the frame of the monitor becomes the only guide as to how to read the image. Over the 11 minute duration of the film, the glistening black totem begins to drip until it almost imperceptibly mutates into a pool of dark liquid. Again the viewer is denied any information about the origins of the object or the process of its making. All we are given are the physical properties of the unidentifiable material and the associations these evoke.

Elsewhere in the building Winnett presented a short video work on loop entitled 'Uamh nam Bo Dubha / The Cave of the Black Cow / Old Tobermory's Cave' (2012). The video pans around the interior of a modest cave while a voiceover provides a detailed description of its geographical environment and the objects found in this remote location. The narrative jumps through time, recording the traces of human activity over the last nine thousand years to its more recent habitation, and descriptions of various ‘tools’ made from stone, bone and bicycle wheels – artifacts accumulated as mankind develops. A young man’s voice (possibly the artist’s) provides this information in the authoritative tone of a documentary – making the work entirely believable but potentially fictional, as none of the details described appears to be visible in the footage, mirroring the slippery relationship we have with the other artifacts in the exhibition.

The collection of works presented by Winnett proposes a world where the artist is able to offer an alternative history of our own existence. His works suggest the possibility that material and form can provide an equally valid understanding of science and anthropology and offer a new, more human, perspective on the artifacts we find ourselves surrounded by.

Kitty Anderson is Curator at The Common Guild in Glasgow. She was previously Associate Director of The Modern Institute, Glasgow, and Associate Curator of Frieze Projects, the annual programme of commissions, talks and education at Frieze Art Fair, London.

Recent freelance projects include 'One cannot go on saying but…', a collaborative project with artists Anne-Marie Copestake, Kate Davis, Rachel Lowther and Lorna Macintyre for 'Contradictory Woolf', The 21st Annual Conference on Virginia Woolf, 2011, 'Overlap', by Claire Barclay at Glasgow Print Studio for Glasgow International Festival of Visual Art, 2010 (with Siobhan Carroll), and 'FLATWORK', a publication exploring the presentation of two-dimensional work by sculptors, published in 2008, (with Vanessa Billy).

Kitty has contributed to a number of printed and online publications including PAR+RS, (Public Art Scotland), and PILOT:, and various selection panels and advisory groups including the Durham Cathedral Artist in Residence programme, freshfacedandwildeyed at The Photographers’ Gallery, London, 2010, New Work Scotland Programme at Collective Gallery, Edinburgh, 2009 and The Cartier Award, 2007.