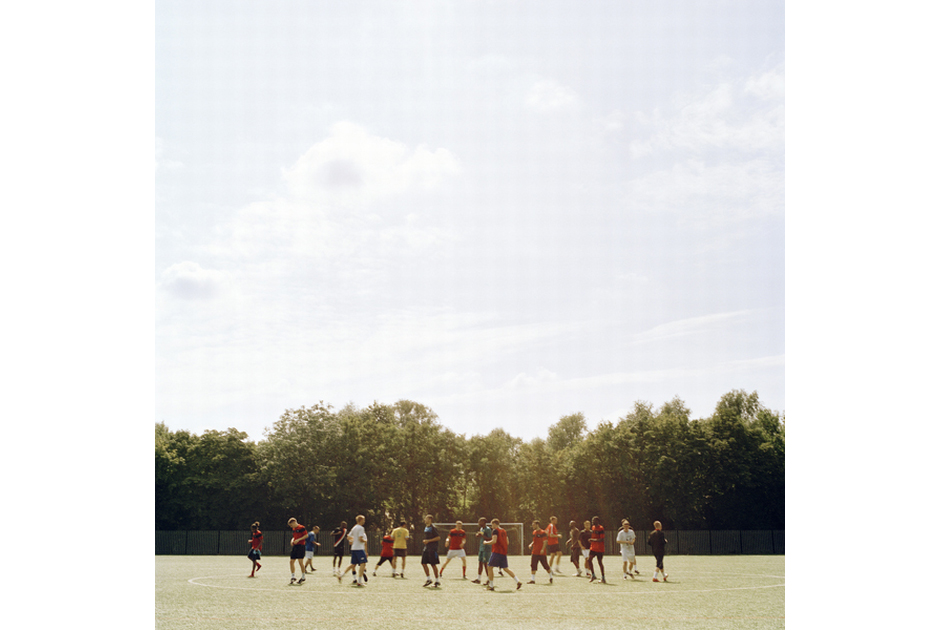 Amid the cacophony of styles and methods of presentation at the LCC’s MA Photography degree show, Jacopo Maino’s work stood out, despite having to compete for limited space. He exhibited a single framed print above an editioned book presented on a plinth. The modesty of this display belied the confidence and maturity of the work within.

Maino writes of his work, ''Once Upon a Time in Bermondsey' explores the concepts of obsession, passion and commitment. It is a story about time: about past, present and future, and how they merge in the collective consciousness of a football club – Fisher FC'. The image of a faded and decrepit football stand is perhaps the most striking in his project but the twenty two others do not disappoint.

Fisher FC was founded in Bermondsey, a district bordering the south bank of the Thames, in the early years of the 20th century, before the First World War. After the club went bankrupt in 2009 it was forced to leave its Surrey Docks stadium, which today lies derelict, used only for car boot sales. Fisher FC supporters, who now own and run the club, reformed it with new players but have to play on the ground of their local rivals, Dulwich.

Maino’s photo essay unsentimentally records the physical decay of the old Surrey Docks stadium, its red plastic seats faded to coral pink, its turnstiles rusted and clogged with weeds, its clocktower stopped. The supporters, mainly middle-aged, some with kids, are photographed watching an evening match in the greenish-yellow glare of floodlights. Coralled behind high wire fences, they seem beleaguered and stoical, their gaze focussed on the pitch. Maino doesn’t go for intimate close-ups of supporters or players, but unattributed quotes accompanying some of the images reveal their deep attachment to club and game.

Maino’s documentary approach is unobtrusive, detached almost, but empathetic. The way he frames his shots contributes hugely to one’s perception of the subject. For instance, the players are photographed during a training session in the middle of the pitch. Instead of a landscape Maino uses a portrait format, so that the ring of players appears near the bottom edge of the image, against a border of trees and below a vast expanse of sky and clouds. The footballers are distant – their legs twinkling in movement – yet near at the same time. A sports photographer would never take this shot, for its drama and poetry lie as much in the landscape of which the players are a part as in the action on the pitch.

'Once Upon a Time in Bermondsey' is an emotionally mature piece of work by this young Italian photographer, but it’s neither slick nor too clever; it left me keenly anticipating what he will do next.