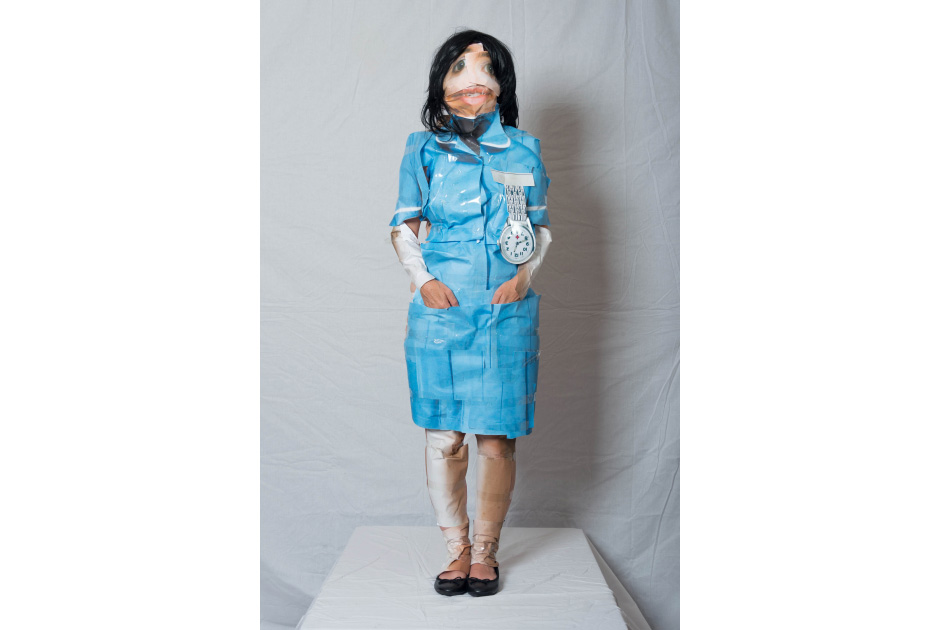 As I make my way up the last set of stairs (five floors), I gaze at the view, the whole city laid out before me with an endless sky. What an inspiring place to come and make art. I swing open the door and feel excited about what I might find: the buzz of the unknown, a moment of discovery, the sense that somehow a different version of the world is going to be revealed.

There are several artists at this year’s MA show at Cardiff Metropolitan University who are encouraging us to look at the world in a different way, from Fay Greenslade’s drawings of her commute to work, produced by a hand-made contraption placed in her car to Tracey Watkins with her miniature worlds.

However, it is Hayley Danaher who really captures my attention. The work consists of several series of photographs and sculptural objects. I am particularly drawn to a collection of documented performances where the characters or portraits of five people have been created by layering collaged photographs over the top of the body.

The photographs are presented like a hall of mirrors, the bodies all out of scale, one large eye, photographed hands layer on top of real hands. It is a strange mix of reality and the surreal with a shift from 2D to 3D and back again. There are echoes of Cindy Sherman, Diana Arbus, Osang Gown, with a bit of Bo Selecta thrown into the mix. 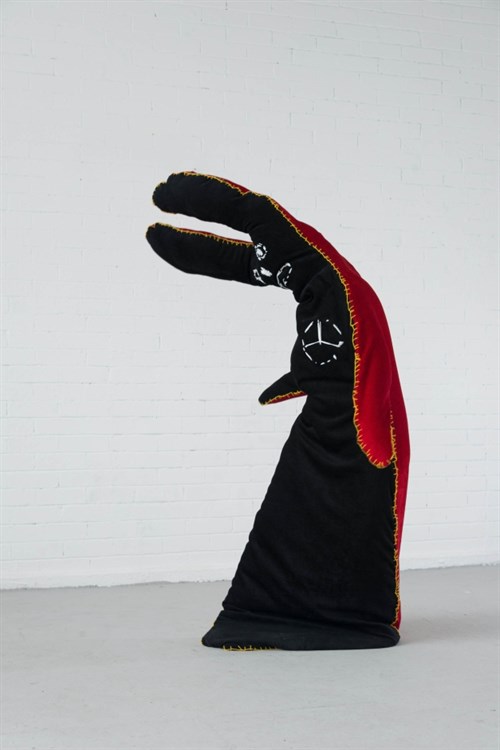 However, it is with the human-size 3D black and red rabbit that all my questions rest. Like a weird dream, it is leaning against a mirror hung on the wall. It makes me feel like a child but all the parameters have changed, like a contemporary twist on Alice in Wonderland perhaps (as well as a nod to Donnie Darko).

I can’t stop staring and thinking, ‘Who are these people? How do I relate to them? What is the story? And who is the rabbit creature?’ It is all slightly bizarre, grotesque, comical but strangely beautiful. As I exit the exhibition and glance at the city view, I realise that my sense of reality has shifted.

Since graduating Goldsmiths College, I have exhibited both across the UK and internationally. Over the last year, I have completed a series of commissions: a large photographic collage  ‘Nothing Is What It Is Because Everything Is What It Isn’t’ at the National Museum Wales, Cardiff, commissioned by the Colwinston Charitable Trust: a series of photographic performances as part of a group exhibition Fat Birds Don’t Fly at Netwerk Gallery, Belgium and a live performance for a group exhibition called Time Will Tell, Croft Castle, Meadow Arts, UK. I recently took part in URRA International Artist Residency, Buenos Aires in 2012 and in 2011 received a Creative Wales Award.