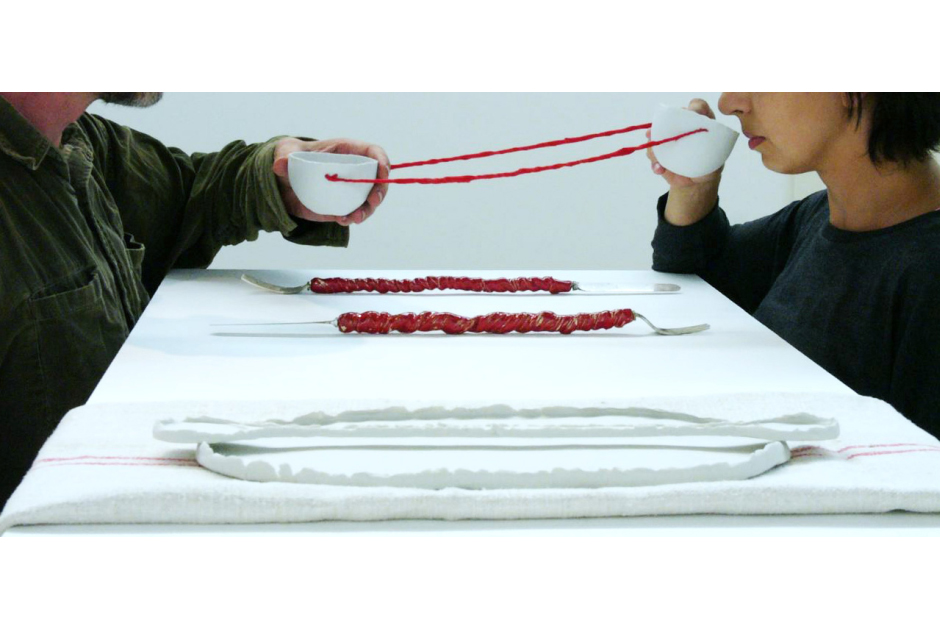 Hajnalka Rezes creates interactive ceramics and mixed media objects. Her bowls rebel against their domestic function: one bowl is connected to another with a red thread, inconvenient for snacking. Hajnalka’s spoons are oversized and have wires - in all wrong places for a fast-food dinner in front of television. Instead, Hajnalka’s playful tableware and cutlery explore emotional dynamics and interaction.

Ancient and medieval people shared food by eating with hands from a common bowl. Today, functional tableware and cutlery depart from these earlier, intimate acts of physical and symbolical food sharing. Hajnalka has been influenced by the work of John T. Cacioppo, a neuroscientist at the University of Chicago Social, who links social isolation and loneliness to such physical and mental conditions as sleep disorders, high blood pressure and increased risk of depression. 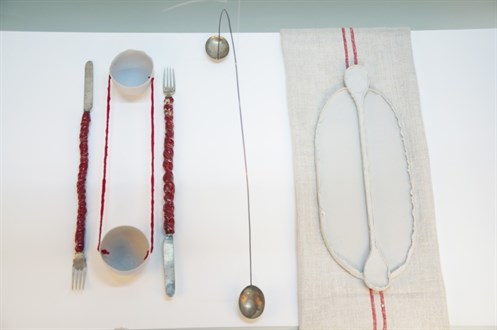 Conceptual ceramic tableware has a long tradition in the history of art. However, this is not a feminist 'Dinner Party' (1979) by Judy Chicago, with its concern for the history and discourse of the female victim. While not shying away from making social comment, Halnajka’s tableware is a demand for considerate actions, sharing and connections. Her cutlery generates and restates the importance of emotional dynamics and empathetic exchange. For any functionality, the diners must face and interact with one another. Hajnalka says: ‘I love to watch people, emotions and motivations... As people interact they look at each other and share emotions. My objects realise the idea of bonding and visualise the interaction.’ Halnalka’s spoons encourage ‘spooning’, an action of affection. A red thread borrows from eastern cultures suggesting the value of bonding.

In the future, Hajnalka plans to collaborate with a psychologist in a research lab and to organise live events in a socially active public space. Meanwhile, mealtime returns to being a socially and psychologically sensitive event: it is yet again for bonding, sharing and giving – it is restaged as an expression of altruism.

Dr Outi Remes is a director of the New Ashgate Gallery, Farnham. She has lectured on contemporary art and exhibitions at Richmond, the American International University, Birkbeck College, the University of London and the University of Reading. Previously, she worked as the Head of Exhibitions, South Hill Park Arts Centre, and was awarded a PhD from the University of Reading. She is the author of many publications, including Conspiracy Dwellings: Surveillance in Contemporary Art, 2010, co-edited with Pam Skelton, and the curator of numerous projects such as Rules and Regs live art residencies, 2007-11, and At Play, the touring exhibition series, supported by Arts Council England, 2009-12 with Cally Trench, re-creating a sense of what it is like to be a child at play. She is a committee member of the Museums and Exhibitions Group, the Association of Art Historians (AAH).