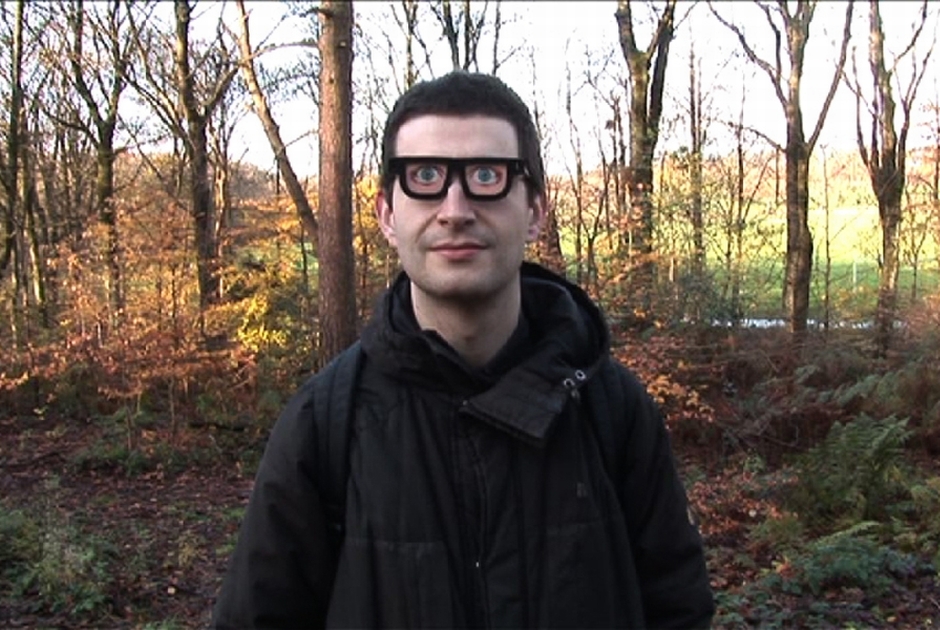 For The Glasgow School of Art MFA degree show, Giuseppe Mistretta presented a single video work entitled 'The Form You Adopt Upon Entering the Room' (2011) in a small, self-contained room in the former Glue Factory on Speirs Locks.

Projected on to a large screen against the wall, the film features a couple awkwardly embracing for 13 minutes as the camera slowly pans around them. The first minute of the film shows the couple preparing for the 'performance' and choosing a suitable position for their embrace. Occasionally zooming in on the couple's gestures or discreet movements, the handheld camera falls in and out of focus as we see the tenderness of the embrace turning to discomfort and distraction. The viewer finds themselves increasingly aware of the sound of the cameraman moving around the room and the noise of traffic outside.

This is one of a number of works by Mistretta in which the artist invites friends and colleagues to participate in a performance that they know nothing about in advance. Although we are given no information about exactly what Mistretta asked the participants to do, the mis-matched couple and their self-conscious behaviour provides some explanation of the set up that we see. Earlier works, such as 'School State' and 'Eyes That Talk to the Gods' (both 2009), provide further context for the film and confirm Mistretta’s interest in capturing others in intimate or exposed situations.

'School State' features a group of students standing around the grand Victorian hallway of the McLellan Galleries in Glasgow, which is currently home to The Glasgow School of Art MFA course. After a slightly hesitant start the students begin to sing, though it's hard to make out exactly what they are singing or for whom. As the camera moves around and amongst them, individual voices become audible and it's apparent that each of the students is singing a different song and that there is no audience for this seemingly impromptu performance. The range of body language and volumes suggest varying degrees of ease with the situation, some clearly enjoying the opportunity to perform and others wishing they weren't there at all. As the camera slowly circles the group, the collection of individuals forms a more tangible whole, their separate voices merging into one.

In 'Eyes That Talk to the Gods' Mistretta filmed a walk through the park with a fellow student while wearing 'blinking specs', comedy glasses with eyes that blink as the wearer tilts his head up and down. The film documents the two men adjusting to the glasses, and the strange perspective they provide on their environment, whilst trying to discuss their thoughts on nature and perception. By creating a barrier or disguise, the glasses allow the men to speak openly about the situation they find themselves in whilst simultaneously being distracted by the ridiculousness of the situation.