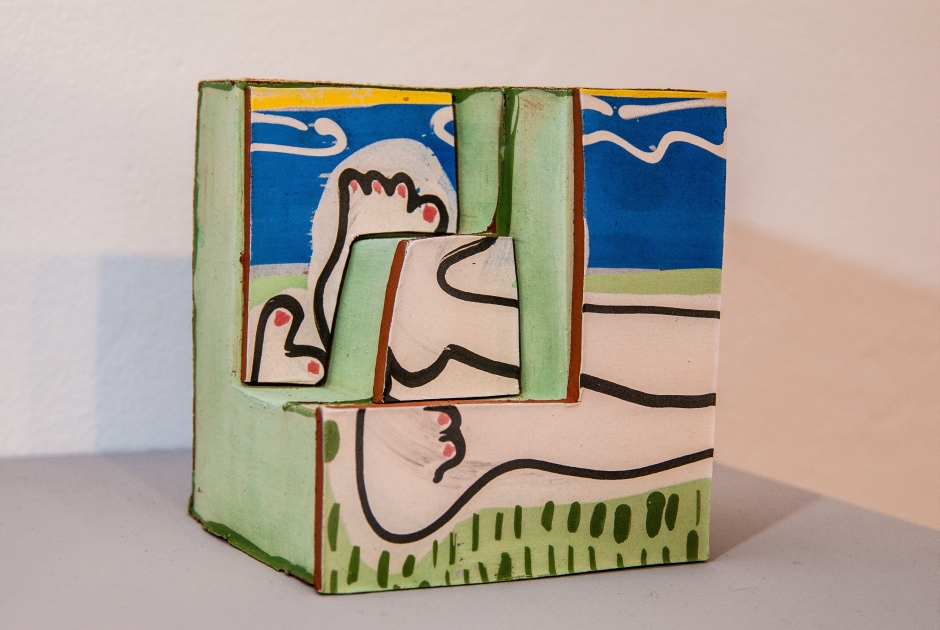 It was a privilege to be asked to select my MAstar from the 2013 MA Ceramics show at Cardiff School of Art & Design. Returning to the Howard Gardens site reminds me of my Foundation Year, which was the most enriching and enjoyable year of my educational life, so it was a pleasure to go back.

There were three strong contenders in my view, but in the end I selected Élodie Alexandre as my MAstar. Of the year group, I felt that Élodie had resolved her purpose and practice most convincingly. She presented a highly crafted collection of works that were playful and enchanting individually, and eloquent as an installation. 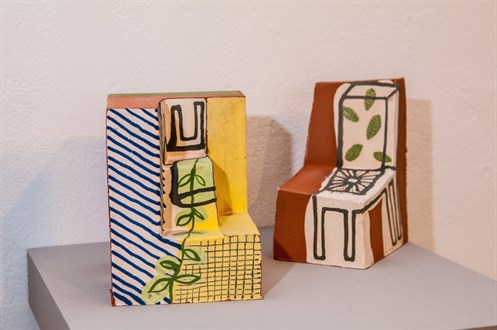 Élodie’s display of small slab-built structures was presented on a long table-top surface, arranged as a collection like a haphazard village of coloured dwellings. On closer inspection each piece revealed itself as in fact an interior space, but with an interplay between the interior and the exterior realms. She talks about the pieces as ‘attempts’, a way of creating meaningful or poetic moments. In them a sort of simultaneous translation is taking place between the 3D form and the 2D drawing, between the flat and the spatial. This is not easy to pull off: her drawing isn’t imposed on the form, but is a part of it. Robust, dimensional slip-made lines make the surface of her work particularly important (she talks about liking the imperfection of brush-mark, and making lines. The edges of her materials create sharply defined lines which contribute to the overall impression of controlled graphic composition.

She is aware that in capturing a moment or a memory there is a gap between what the thing is and how it is described. It’s a preoccupation that might stem from her first career as a translator (French-English). Language, versions of things, intent, trying to capture the meaning of things, resonance - all these things are relevant both to her practice as translator and as artist. For Élodie those challenges are visual rather than linguistic: her language is drawing, her medium now clay. 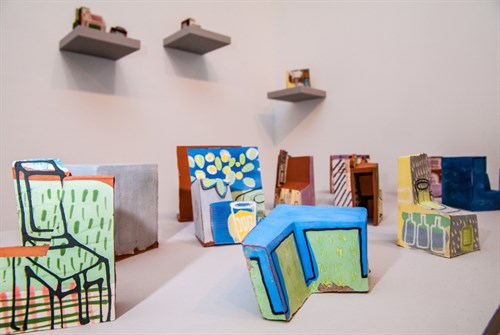 Her influences are eclectic and far-ranging: the work of Betty Woodman; Modernism (specifically cubist collage); William Scott; slipware pottery and the tapestries of Thomas Gleb. But fundamentally what makes Élodie stand out, in my view, is her individual voice combined with a real sense of purpose. These ’attempts’ have a playfulness and a seriousness that are part of her journey of exploration. She says she now wants to develop pieces that are ‘both picture and object’ as ‘there is a lot of potential in those’. And I think she is right.

Meg Anthony manages and curates Oriel Myrddin Gallery, a public contemporary art gallery in Carmarthen, west Wales. She studied Fine Art & History of Art in Goldsmiths’ College, University of London, but has since spent most of her professional life in Wales. She lives in Swansea.