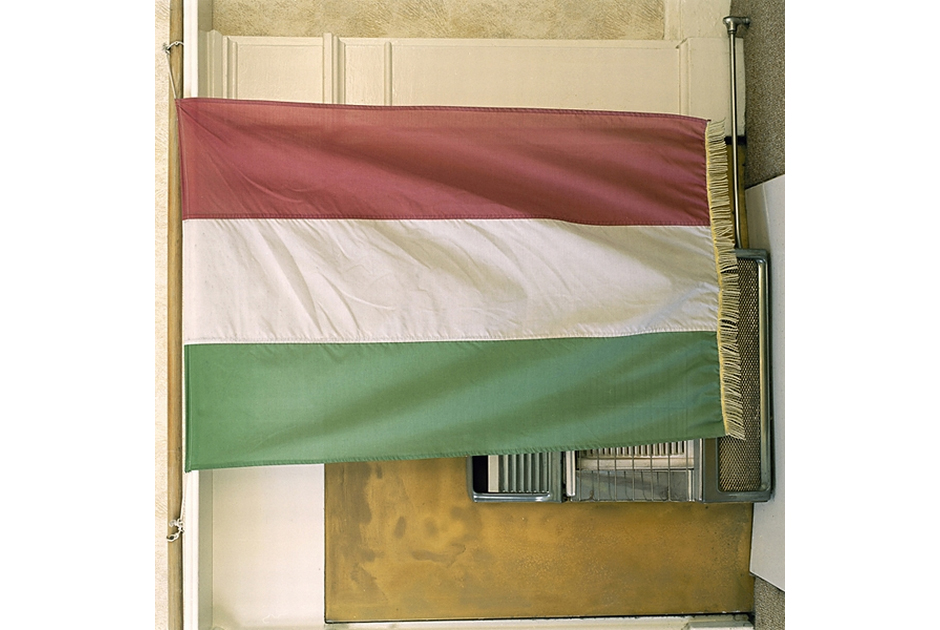 When Diane Bielik learnt that the Hungarian Club in Bradford, set up in 1957, was due to close, she spent two years documenting the process. The daughter of a Hungarian political refugee, Bielik carefully avoids and indeed subverts any temptation to romanticise the national tokens, trinkets and trophies the Club has prized. What makes this series of sly, cleverly understated series of photographs of fixtures and furnishings in the Club so compelling is its ability to convey a cultural aesthetic even as it is being dismantled, both by the Club’s demise and the wider political shifts in Eastern European history and through Bielik’s working methods. In one image, a tall piece of furniture, draped in patterned ‘folk’ cloth, stands next to a radiator like a displaced figure, as if to ask what is a souvenir of a place when that place can be boxed up and made to disappear? And if souvenirs, such as a painted plate from Hortobagy, seen in another image, help to construct identity, what happens when the shrine to this identity is removed?

Taking the still life as their prototype, the images are distinguished by a washed-out pallor, from the pale blue carpet to the outdated, anaemic wallpaper. We see an empty display cabinet with five small Hungarian flags hung sadly from its drawers and doors. Anti-triumphant, these flags are eloquently wrong, depleted of the principles they once invoked. Bielik intensifies the purposelessness of these symbols through subtle sculptural interventions: an amateur watercolour of the Danube flowing through Budapest is photographed next to a wainscot, against a ground of florid wallpaper. On closer inspection, however, it’s clear that Bielik had placed the painting next to the ceiling moulding and the white floor tiles are in fact the ceiling. In several other images, this tactic of upturning the fixtures in the image brilliantly destabilises the idea of documentary truth and conveys the emotional upheaval that brought the Club into being and the quiet tragedy of its demise.

It's evident that despite the irreverent humour, Bielik’s stance is fondly bemused. For another photograph, she has pushed white chess pieces into the buttoned-down velour crevices of a wall seat, exposing the lack of function in the function room. As Bielik interrogates her own relationship to history, memory and culture in such a playful and mock-heroic way, so we reconsider how we view the paraphernalia from former Communist countries with a complex mix of nostalgia, superiority and amusement. She allows space for these contradictions and clearly revels in them. The former idealistic glory may be faded, yet her wry treatment gives the objects one last kick of subversive energy that makes the series anything but an elegy. These photographs refuse to be forlorn. Bielik has made the typical, atypical, the cutesy, bizarrely brazen.