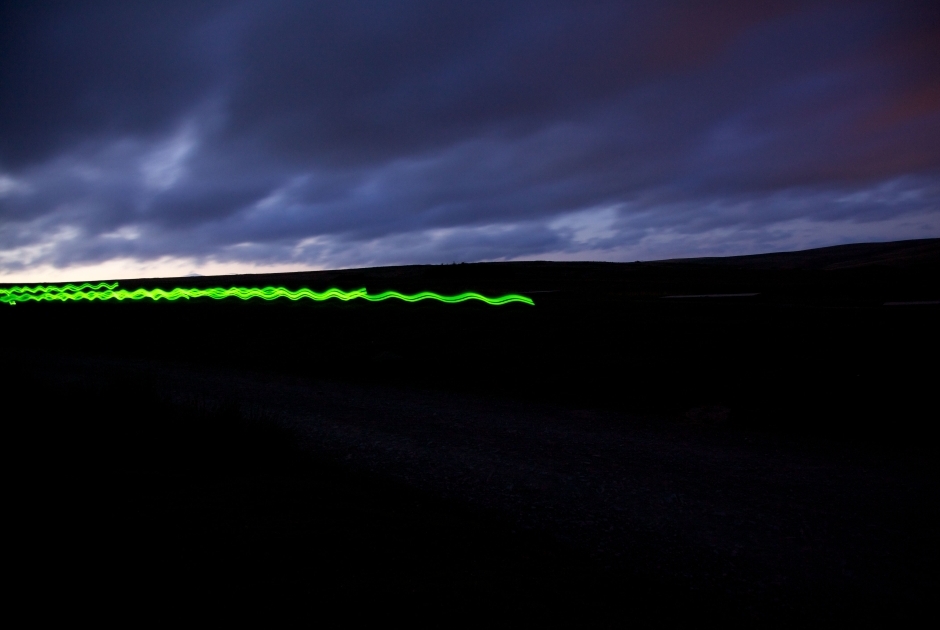 Land of Our Fears

Colleen Ford-Ellis has just completed five years of art training, culminating with an MA in Documentary Photography from Univrsity of Wales Newport. For her MA show she presented work from an ongoing phased project that examines landscapes and our relationships with them.

The body of images, clustered under the title 'Land of Our Fears', were all made on a Ministry of Defence training site, one of the largest in the UK, in the Brecon Beacons. Access to this vast site (some 30,000 acres) is controlled, but Ford-Ellis, who worked for a defence training provider before turning to art, was able to build up a relationship with the camp staff, over several years, allowing her to research and set up the shots, always with their consent.

The series depicts dark landscapes, imbued with a sense that something covert is going on and punctuated with lights. Closer inspection reveals tiny details – the outline of a tank and, equally importantly, the absence of the expected – street lights, human habitation. Ford-Ellis here is concerned with the militarisation of landscapes. But her scope is wider than this and also deals with sublime and fantasy landscapes (this site has stood in for The Falklands, The Balkans, Afghanistan and Iraq). In its midst, high on a mountain, stands an incongruous East German village, built at the tail end of the Cold War in the 1980s. It is simply referred to as FIBUA (Fighting In Built Up Areas), and is used to train soldiers to fight in populated places.

Some 8,000 infantry troops pass through the training centre each month but their presence is scarcely felt as you drive through the area (stopping the car is not permitted). Instead it is an area of exceptional beauty, dotted with sheep and Portaloos. The stands of non-native softwood trees are almost as incongruous, dense and dark on the soft rolling landscape that offers views right up to the middle of Wales.

While this site sets up a fantasy narrative for military training purposes, Ford-Ellis is just as concerned with our own personal response to landscape. She feels that we bring our own 'archive of memory' to our reading of a place. And this place has its own memories. After its acquisition by the War Office in 1940, the population of 219 souls was cleared to make way for the war effort and never repatriated: the school, the pub, the farms, the chapel were all abandoned.

Using a range of techniques and factoring in the vagaries of the weather, Ford-Ellis has immersed herself in one of the largest military landscapes in the UK. Her landscapes, while mysterious, are not threatening. There is a level of ambiguity in the just discernible activity emerging from the darkness.

Using a medium format camera, Ford-Ellis set up long exposures that create their own narrative and movement: light trails; the detail on the horizon line in the night shots. She works with digital techniques to capture the action of the training exercises.