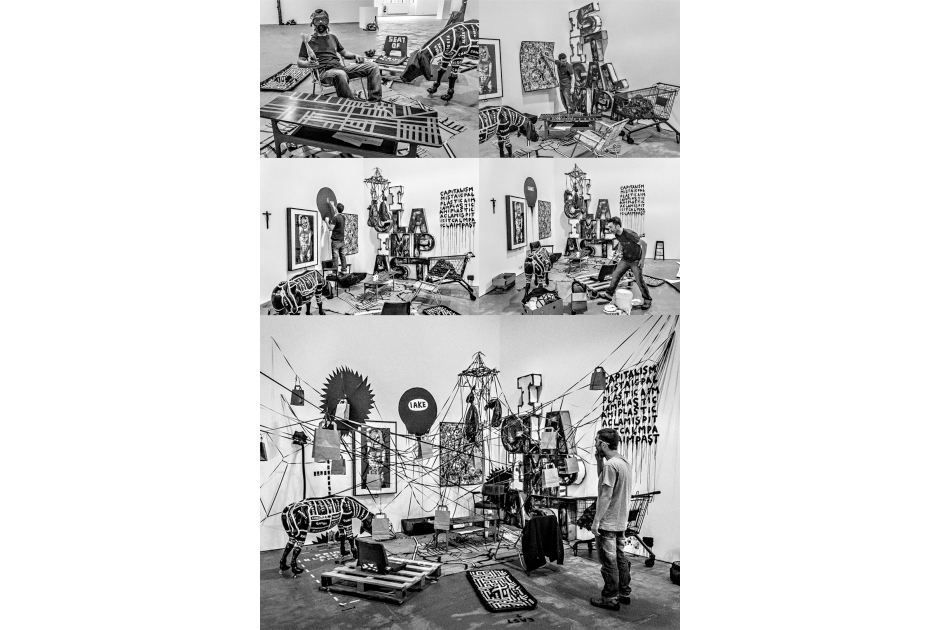 There is much radical dissent in the work at the SHU MA show, especially from Chris Graham. His installation is dense and complex, hidden within a web-like mass of videotape, and starkly monochromatic. Here it is, in black and white.

The subject matter is the Iraq war, and its ideological basis. The metaphors are clear and forceful: the hooded figure of a detainee at Abu Ghraib is literally made iconic, cast as an award statuette; ‘Fallujah Baby’ is a blackened infant in half an oil drum, deformed in the womb by depleted uranium; a fatted calf, titled ‘Fuck the Middle East’ is carved up like a butcher’s carcass; the ‘Eat Kate Moss’ poster critiques the objectification and commodification of women. No institution is spared here; ‘The Seat of Criticality – Broken on Top of the Culture Industry’ is an old school chair precariously balanced on a broken pallet. Although I don’t physically sit on it, figuratively speaking I can’t help feeling I should. All institutional power needs to be questioned, and Chris Graham uses his art practice as the means to do so. 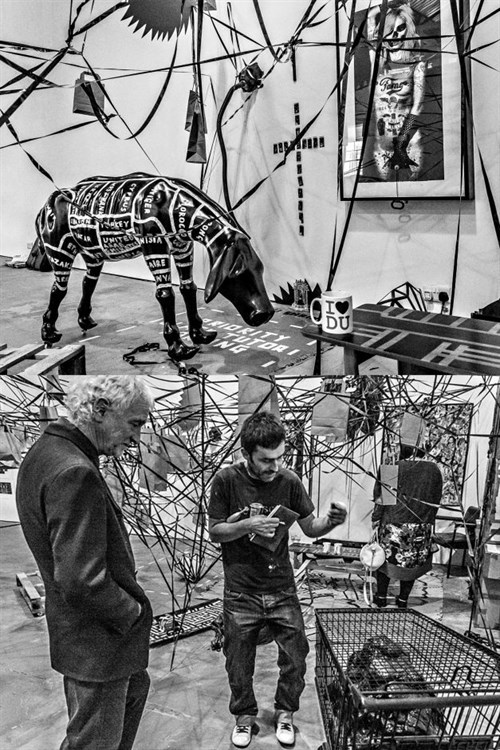 Graham’s critique is not a blunt weapon - indeed the work is subtle and nuanced, even humorous. ‘The Aesthetics of Conflict’ ingeniously uses a music-box mechanism, translating UK Military, US Military and civilian death statistics, using a punched paper spool, into a melody, which crescendos as the casualties increase. Chris plays it for me, and the jarring effect of representing the loss of human life in the form of a pretty tune is startling.

This is no inchoate outburst: Graham’s critique is informed and politically literate - his ‘Fragmented Negative Attack Methodology’ graphic shows his sophisticated synthesis of aesthetics and politics in a cool diagrammatic form.

I have always felt the need to be moved in order to truly love a work of art, and Graham ably does this with his Sturm und Drang. When we speak, ‘authenticity’ is a term that comes up, and Graham has it in abundance. It is heartening to see an artist make work of real power tackling important issues in the world in an era of self-referential artworld in-jokes … even if he does leave me feeling uncomfortably like an Establishment apologist. 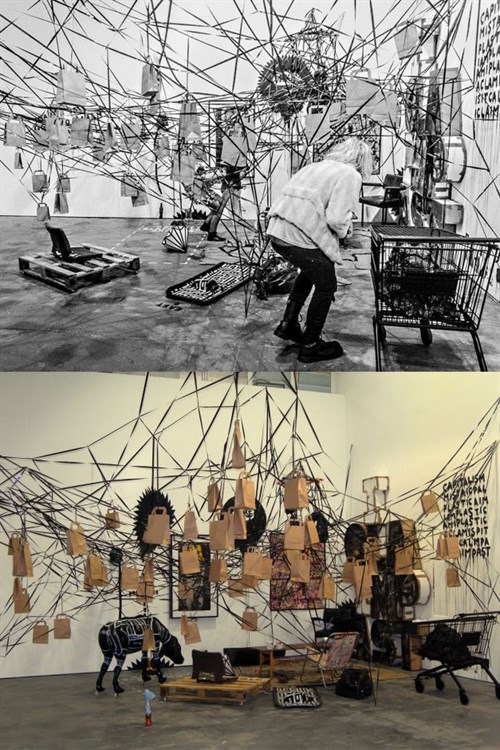 David Gilbert is an experienced freelance contemporary art curator, arts consultant, project manager and arts educator. He has worked for many years in the museum & gallery and education sectors, with a particular interest in contemporary visual arts.