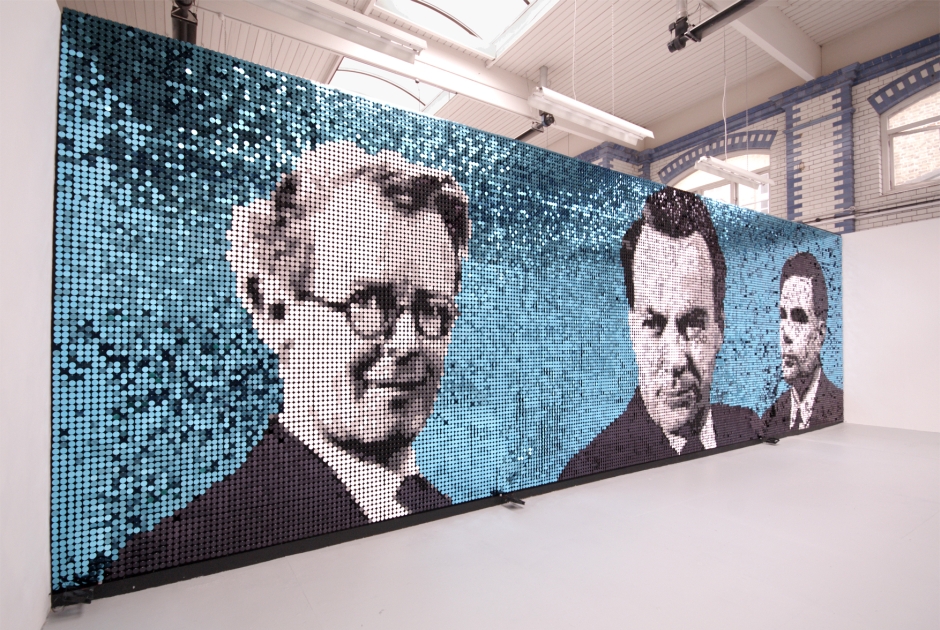 The Goldmsiths postgraduate show seemed teeming with good cheer this year, quite apart from also being the best spot to see the slightly disappointing Shard opening light display (against the Will Alsop squiggle on the fifth floor of the Ben Pimlott studio buildings). I made my way through the old swimming baths and the new gallery planned in the nearby tank. Among the works that caught my eye were Geoffrey Litherland’s scifi paintings with what looks like a nod to the Wild West. The curatorial offering was also great this year: each student had asked the same artist to respond to the same brief in a different way, wonderful concept, poor artist!

After that I worked my way through the six floors of the Ben Pimlott building, and then returned to the second artist that caught my eyes in the baths, Cheryl Field. 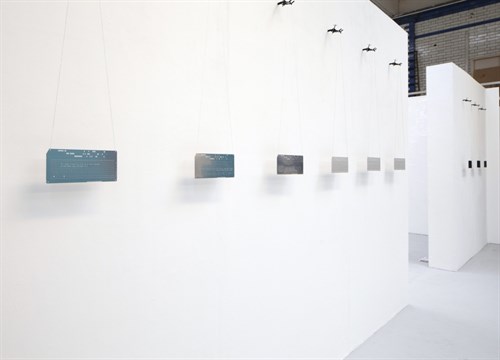 Cheryl’s work has a ‘tech’ appeal, whilst being firmly rooted in an existential framework. Her showing embraced the rectangular space in an exhibition of three parts. The most eye-catching piece was the large wall-based installation ‘Fellows of the Royal Society,’ which shows the very early beginnings of the Higgs Boson. The three figures are shown in individual ‘particles’ of coloured mirrors. Another wall displayed a series of page-sized, punched-out metal panels, suspended on chains of uniform length. The panels were etched with references to different existential philosophies. These belong in a digital age, but speak of philosophical discourse. 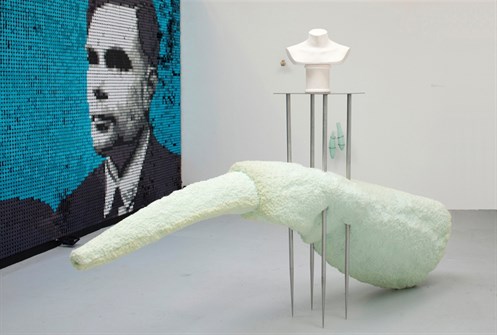 In another area we are presented with a series of small sculptures, which again are quite different in material to the other pieces, but whose philosophical and ethical concerns seem consistent with her other work. Several items make up one piece of work entitled ‘We Are Building Something Better Than You.’ A small ball of teeth and a plaster cast bust interjected with a long foam sculptural object speak of life, science and technology.

This all left me pondering over my half pint of Truman Ale, and perhaps took me back to my days at Goldsmiths poring over books of theory and questioning science, art and philosophy. Whereas work like this would have been very ahead of its time then (a few years ago), Cheryl Field’s work seems to have come of age now and has a very current resonance.

Julia Alvarez was born in the UK in 1979. She studied Visual Culture at Goldsmiths and has previously worked for both Hales Gallery and Matt's Gallery. Alvarez is the founder and director of BEARSPACE, a contemporary art gallery in Southeast London exhibiting up-and-coming artists. Alvarez is also the director of the Deptford Art Map.

Described by Time Out as an 'organising force', Julia has become known for her keen eye in spotting emerging artistic talent and progressing the careers of young artists. Their works are exhibited in her Deptford- and Greenwich-based galleries. Alvarez has also curated large-scale exhibitions showcasing emerging artists alongside well-known contemporary names. Alvarez was appointed the chief curator of Deptford X in 2010, organising a programme of events and exhibitions including projects by Bob and Roberta Smith, Yinka Shonibare and Tomoko Takahashi alongside those of younger artists. In 2009, Julia also directed the Royal Academy Schools' Urban Gallery, the largest outdoor exhibition of students' work over a building skin, in Mayfair, London.

Alvarez's recent projects include the Deptford Art Map, putting BEARSPACE at the heart of the emerging cultural scene in South London, and the popular PRINT NOW exhibition, a yearly open-submission exhibition of emerging artists working in print.